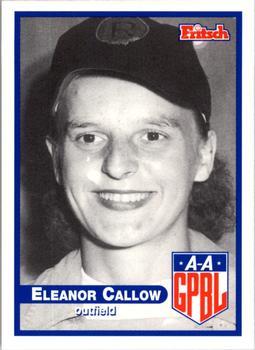 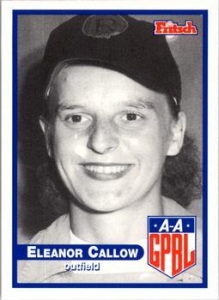 When the expansion Chicago Colleens got off to a 1-13 start in their inaugural season in 1948, the All-American Girls Professional Baseball League (AAGPBL) held an emergency meeting to decide how to prop up the floundering franchise.1 Rockford Peaches fans were not happy with how the issue was resolved.2 When the dust had settled, the Colleens received eight players from the other seven teams, including popular Rockford outfielder-catcher Rita Briggs. In return, Chicago sent a relatively unknown 20-year-old outfielder by the name of Eleanor “Squirt” Callow to the Peaches.3 Little did their fans know that Callow would turn out to be the final piece of the puzzle, helping them win the next three playoff championships.

The left-handed-hitting Callow made an immediate impact on Rockford’s offense.4 The Winnipeg, Manitoba, native led the Peaches in 1948 with 6 home runs and a league-record 15 triples,5 and she finished second on the team in batting average (.251) and RBIs (52).6 It was the first of four consecutive seasons in which she led the league in triples.

Callow’s popularity skyrocketed in the postseason. She knocked in 10 runs in Rockford’s 11 playoff games, highlighted by back-to-back game-winning RBIs in the Peaches’ second-round sweep of the Racine Belles.7 No other Rockford hitter had more than four RBIs in the 1948 playoffs.

The Peaches’ three consecutive championships from 1948 to 1950 were won largely on the strength of their outstanding pitching, and despite Callow’s contributions, their offense remained in the middle of the pack. Rockford’s quest for a fourth consecutive title took a big hit when two of its top three hurlers, Lois “Flash” Florreich and Louise “Lou” Erickson (later Sauer), decided to retire.8 Fortunately for the Peaches, Callow and Ruth Richard both had extraordinary seasons at the plate in 1951,9 and the team’s offense improved from 3.9 runs per game to 4.9.

Rockford came into its August 28 matchup with the Kalamazoo Lassies in second place with a 27-14 record, 5½ games behind the South Bend Blue Sox in the second-half standings. While the Peaches had already clinched a playoff spot, the last-place Lassies (12-32) were merely playing for pride.10

The winningest pitcher in AAGPBL history, Helen Nicol Fox, got the start for Rockford. The 31-year-old veteran had been a mainstay of the Rockford rotation since coming over in a 1947 trade with the Kenosha Comets.11 Nicol Fox had won three games in the 1950 championship series, including a clutch shutout in Game Seven, and she was showing no signs of slowing down in 1951. “Nickie” took to the mound in search of her 17th victory of the season.12

Kalamazoo countered with 19-year-old right-hander Gloria Cordes (later Elliott). The Staten Island product had battled control issues during her first two seasons in the league, and she was still trying to find her footing in the AAGPBL.13

The Peaches got to Cordes in the bottom of the first inning. Dorothy “Dottie” Kamenshek led off with an opposite-field double.14 Two outs later, Callow, hitting in the cleanup spot, drove Kamenshek in with a double and Rockford had an early 1-0 lead. The inning was not out of the ordinary for Rockford in the 1951 season: Kamenshek was the steady table-setter and Callow was the chief run producer.15

In the bottom of the fourth, Rockford second baseman Barbara “Bobby” Payne beat out an infield hit and went to second on a sacrifice by Lillian Hlavaty (later Sadavage). After advancing to third on Nicol Fox’s groundout, Payne scored on a balk by Cordes.

True to form, Nicol Fox faced only 21 Kalamazoo batters in the first six innings. Her shutout was ruined by an unearned run in the top of the seventh. After Peaches shortstop Alice Pollitt (later Deschaine) dropped a high popup off the bat of Doris Sams, Marguerite “Dolly” Pearson (later Tesseine) lashed a triple, cutting Rockford’s lead to 2-1.

Rockford reestablished its two-run lead in the bottom of the inning. Singles by Pollitt and Richard put runners on the corners for Callow. The Rockford left fielder also singled, scoring Pollitt. The hit gave Callow a nifty 4-for-4 night with three singles, a double, and two RBIs.

Nicol Fox kept the Lassies off the scoresheet the rest of the way, and the Peaches held on for a 3-1 victory. Nicol Fox tossed a six-hitter, walking none and striking out four batters.

Rockford continued to play outstanding baseball for the remainder of the second half, finishing in second place with a 34-15 record, 2½ games behind South Bend.

Callow had a career year in 1951, showing off her elite ability to get on base, hit for average and power, steal bases, and play outstanding defense. She led the league in RBIs (84) and triples (10), and her 4 home runs tied her for the league lead with Pollitt and Betty Weaver Foss. Callow also stole a career-high 40 bases and her .326 batting average was fourth best in the circuit. Her plate discipline improved significantly in 1951, as she chalked up more than twice as many walks as strikeouts for the first time in her career.16

The Peaches upset the first-half pennant winners, the Grand Rapids Chicks, in the first round of the playoffs. After winning the first two games of the best-of-five championship series against South Bend, Rockford seemed headed for its fourth consecutive title. But a flu bug went through the Peaches’ locker room,17 and the Blue Sox roared back to win the final three games, claiming their first playoff championship. Although the Rockford dynasty had ended, it was still the most successful franchise in AAGPBL history.18

Callow continued to be a productive player for the Peaches until the league ceased operations after the 1954 season. In her final year she batted .326 with 20 homers and 23 stolen bases, making her one of only two AAGPBL players to record a 20-20 season.19

Callow wrapped up her eight-year career with a .273 batting average and 217 stolen bases,22 although her greatest impact was as a power hitter. She is the AAGPBL’s all-time leader in home runs (55) and triples (60) despite being only 27 years old when the league folded.23 Her 407 RBIs place her third on the all-time list of run producers. Of the five sluggers who drove in at least 400 RBIs in their career, nobody drove in runs at a faster clip than Callow, who averaged 88.3 RBIs per 600 regular-season at-bats.24

She was even better in the postseason, hitting an impressive .322 with 32 RBIs in 171 career at-bats. Callow holds the AAGPBL playoff record for most career RBIs, doubles (9), and triples (3).

Eleanor Callow was one of the greatest outfielders to play in the AAGPBL, and she may well have been the best clutch hitter the league ever saw.

Callow was inducted into the Canadian Baseball Hall of Fame in 1998 as a member of the pioneering group of 68 Canadian women who played in the league between 1943 and 1954.

This article was fact-checked by Kurt Blumenau and copy-edited by Len Levin. Thanks to Cassidy Lent of the Giamatti Research Center in Cooperstown for providing a copy of Eleanor Callow’s Hall of Fame file.

In addition to the sources cited in the Notes, the author consulted AAGPBL.org and The All-American Girls Professional Baseball League Record Book. Standings were referenced in the South Bend Tribune, Kenosha Evening News, and Battle Creek Enquirer. Unless otherwise noted, all play-by-play information for this game was taken from the article “Peaches Beat Belles, 3 to 1; Play Grand Rapids Tonight” on page 13 of the August 29, 1951, edition of the Rockford Morning Star. 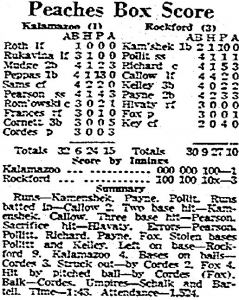 1 The AAGPBL reserved the right to reassign players from one team to another whenever it was in the league’s best interests. “Peaches Lose Rita Briggs,” Rockford Morning Star, May 30, 1948: 37.

3 Rockford also received rookie infielder Barbara “Bobbie” Liebrich from the Kenosha Comets as compensation for losing Briggs. Liebrich finished her playing career with only four at-bats in the AAGPBL, although she became a team chaperone for five seasons. “Peaches Lose Rita Briggs.”

4 The AAGPBL website shows Callow as a switch-hitter. Her Baseball Hall of Fame file lists her as a left-handed batter.

6 The league batting average was a paltry .198 in 1948, so Callow exceeded that mark by 53 percentage points.

8 While Rockford’s pitching wasn’t as good in 1951 as it had been during the previous three seasons, it was bolstered by a breakout season by Rose Gacioch, who was the league’s only 20-game winner. Marie Mansfield (later Kelley) also compensated for the loss of Florreich and Erickson. Mansfield was converted from an outfielder to a pitcher and she went 16-8 with a 2.85 ERA in 1951.

10 Kalamazoo finished in seventh place in the first half of the season.

14 “Peaches vs. Chicks in Play-Off Preview.”

16 Callow had 49 walks and 23 strikeouts in 380 at-bats in 1951. Between 2006 and 2021, the only player in the American or National League who qualified for the batting title and had at least twice as many walks as strikeouts in a season was Tommy La Stella in the pandemic-shortened 2020 season (27 walks, 12 strikeouts). Prior to 2022, the previous player to achieve the feat in a full season was Luis Castillo in 2005 (65 walks, 32 strikeouts). Callow also walked more than twice as many times as she struck out in 1953 and 1954. A list of all American and National League players between 1969 and 2021 who walked at least twice as many times as they struck out can be found at https://stathead.com/tiny/P1P6I.

20 The AAGPBL All-Star team, which included only three outfielders, was named after the season ended.

22 The All-American Girls Professional Baseball League Record Book credits Callow with only 214 career stolen bases. The AAGPBL web site shows her as having stolen 217 bases. Callow’s Hall of Fame file has conflicting information on her stolen-base total. The discrepancy appears to be based on whether she stole 25 or 28 bases in 1949.

23 Some have referred to Eleanor Callow as the Babe Ruth of the AAGPBL. Given her speed, defensive abilities, and her penchant for triples, Tris Speaker would be a better comparison.