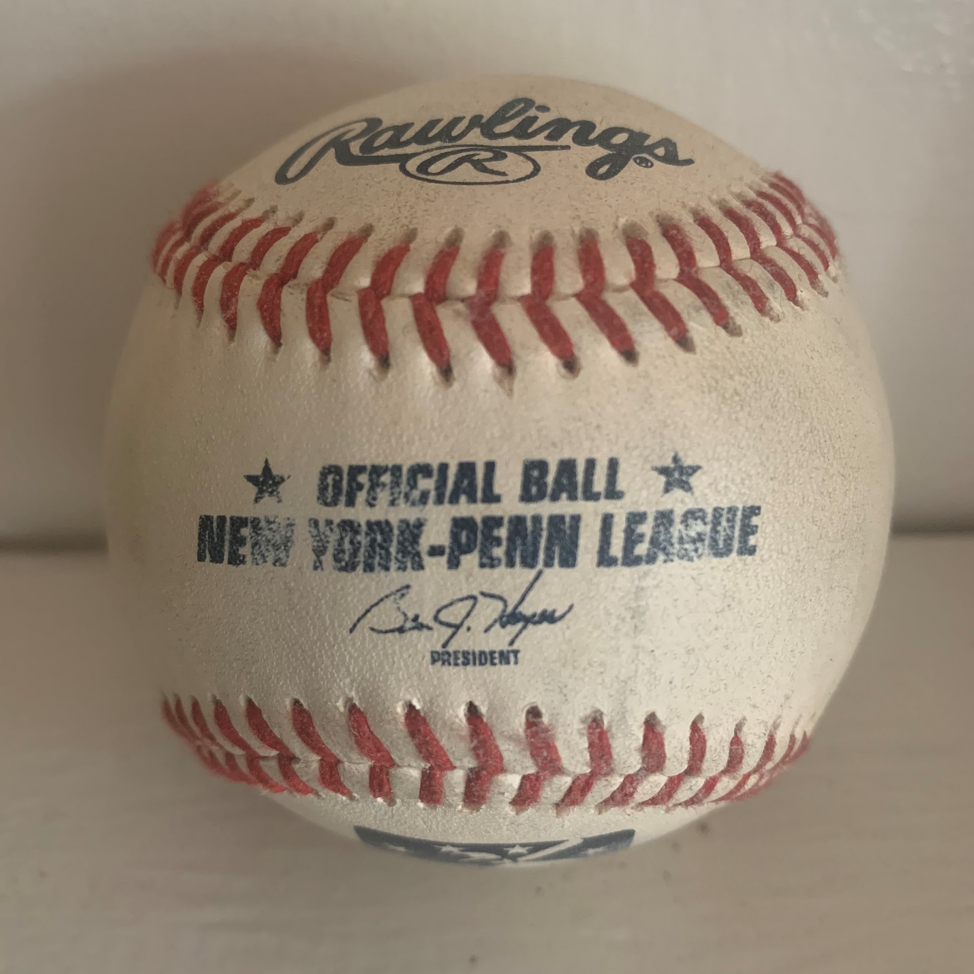 In 1991 the major leagues adopted stricter requirements for no-hitters, stipulating that a pitcher or pitchers must throw at least nine innings of hitless ball to qualify. That decision washed 31 no-hitters off the books, many of them rain-shortened affairs.1

By contrast, the short-season Class A New York-Penn League has never adopted a minimum-innings requirement for no-hitters.2 That explains why Tom Deidel, a former Milwaukee Brewers farmhand, is still credited in the league’s record books as having achieved perhaps a pitcher’s most frustrating feat. On August 3, 1972, Deidel pitched a no-hitter for the Newark (New York) Co-Pilots but lost the game due to a combination of bad fielding, bad weather, and, perhaps, bad luck.

Rain was something of a recurring motif in New York State in the summer of 1972. In June Hurricane Agnes roared through, causing devastating river flooding in communities like Elmira and Corning. The geographically close-knit cities of the New York-Penn League felt nature’s wrath too: Highways and properties were flooded in Geneva, and 15,000 people were evacuated from the Auburn area because of concern about a weakened dam.3 The league’s Opening Night schedule on June 23 was washed away.4

At the start of August, Agnes was long gone, but the rain kept on. Precipitation on August 1 washed out a game between Oneonta and Niagara Falls. More rain the next night idled six of the league’s eight teams, with only Oneonta and Niagara Falls managing to sneak in a doubleheader. And on the night after that, the weather put the kibosh on a Jamestown-Niagara Falls doubleheader as well as a single game between Auburn and Oneonta.5

With decks awash, then, the Batavia Trojans (a Mets farm club) and the Newark Co-Pilots convened at Batavia’s MacArthur Stadium6 on Thursday, August 3, in hopes of playing a doubleheader and making up lost ground on the schedule. Manager Wilbur Huckle’s Trojans came into the game sixth in the eight-team league with a 12-25 record, while skipper Sandy Johnson’s Co-Pilots ran last with a 10-26 record.7

Like most low-minor-league teams, the Trojans and Co-Pilots boasted only a few names that would ever be recognizable to big-league fans. Only two of the Trojans, shortstop Mark DeJohn and first baseman Brock Pemberton, managed even short cups of coffee in the major leagues. Both were in the lineup for the scheduled first game that night. The Trojans’ starting pitcher was 21-year-old rookie Tim Juran, a lefty who had compiled a 29-8 record at Valparaiso University in Indiana before becoming a 44th-round draft pick of the Mets.8

As for the Co-Pilots, six members of the 1972 team eventually made the majors. Those who played on August 3 included shortstop Bob Sheldon, center fielder Sam Mejias, and left fielder Dick Davis.9 The Co-Pilots gave the first game start to Deidel, a 17-year-old lefty out of Denver’s Mullen High School who was already building a reputation as a strikeout artist. He entered the game with 63 punchouts in 41⅔ innings of professional play.10 The “Faces in the Crowd” column in the July 31 issue of Sports Illustrated also saluted Deidel for throwing two no-hitters and striking out 179 batters in 86 innings during his spring high-school season.11

One other future major leaguer ended up playing a major role in the game’s outcome, though the 875 fans who came to the ballpark for the Kiwanis Night doubleheader probably took no notice of him. Future National League umpire Dave Pallone started his pro career in the New York-Penn League in 1971 and umpired there in 1972 as well. His name is listed in a newspaper box score as one of the game’s two umps.12

Perhaps inevitably, a light drizzle started as the crowd streamed in, but the game got under way on schedule. Both Juran and Deidel looked strong in the early going as a pitchers’ duel shaped up. Through 2½ innings, neither team scored.13

In the bottom of the third, Deidel struck out Trojans third baseman Hedy Boscan and opposing pitcher Juran for two of the five K’s he racked up that night. Then his dominant start turned into a watery nightmare. Deidel walked second baseman Jack Kidder. DeJohn followed by hitting a hard shot to Newark second baseman Tim Hamilton, who booted it for one of the Co-Pilots’ four errors. Kidder took third and DeJohn reached first on the misplay.14

Next up was Pemberton, who like Deidel had been a sixth-round draft choice in June. He hit a routine shoulda-been-the-third-out grounder to Newark third baseman Roger Danson, who fielded it cleanly and made what all accounts agree was a strong throw to first. But the ball went through first baseman Frank Slaton’s glove — perhaps through the webbing, one game story suggested — and rolled away. Both Kidder and DeJohn scored unearned runs. Through either rotten luck or rotten leather, Deidel had fallen into a 2-0 hole without surrendering a hit. He finally got catcher John Trevisan to line out to end the inning.15

This sloppy outburst of “offense” ended up as the game’s turning point — or, one might say, its high-water mark. Batavia’s Juran pitched five innings and yielded only two hits, a single by Sheldon and a double by Davis, plus two walks. Game accounts make no mention of any serious rally by the Co-Pilots. Newark’s Deidel also nursed his no-hitter, with two walks, through four innings.

In the bottom of the fifth, Mother Nature knocked out the New York-Penn League yet again. With Batavia coming to bat, umpires Pallone and Ross Crucilla “wisely halted the contest,” according to one report.16 With 4½ innings in the books, the teams had completed just enough baseball to count as an official game. Deidel became the third pitcher in league history to throw a no-hitter and lose.17 As of 2020, he remained the most recent.

The scheduled second game of the doubleheader was washed down the drain. That made the night even more frustrating for Deidel and his teammates, who saw their scheduled August 24 matchup with Batavia hastily turned into yet another doubleheader. When the teams met again on August 24, Batavia again won the first game, while the second game was, pretty predictably for that summer, rained out.18

The waning days of the 1972 season added one more colorful twist to the story of Deidel’s rain-soaked, ill-starred no-hitter. On August 26 Juran took the mound for Batavia against the Niagara Falls Pirates and pitched a seven-inning no-no of his own, winning 1-0 on a home run by Pemberton.19 On the official list of New York-Penn League no-hitters, the next name to appear after Tom Deidel is Tim Juran. It’s an interesting coda to a unique, if entirely too wet, night of baseball.

Neither Baseball-Reference nor Retrosheet provides box scores of minor-league games, but the August 4, 1972, editions of the Batavia (New York) Daily News and the Geneva (New York) Times published a box score for this game.

Many of the newspapers cited were accessed through fultonhistory.com.

2 A minor league would be unlikely to adopt a nine-inning no-hitter requirement because minor-league teams regularly play scheduled seven-inning games as part of doubleheaders. Still, the New York-Penn’s list of no-hitters includes any game long enough to be official.

7 At season’s end, the teams stood in sixth and seventh places, 18½ and 24½ games back respectively.)

8 Juran was elected to Valparaiso’s Athletic Hall of Fame in 2001.

9 The members of the ’72 Co-Pilots who eventually reached the majors but did not play on this night were pitchers Greg Erardi and Roger Miller and utilityman Dan Thomas.

15 “Another Nightmare in Batavia for Co-Pilots.” The game story in the Batavia Daily News simply says that Slaton “let the ball get by him.”

17 List of New York-Penn League no-hitters, accessed on milb.com August 6, 2020. The other two pitchers to lose no-hitters were Lou Blackmore of Wellsville in 1948, and Jim Mitchell of Batavia in 1952. Mitchell’s game came as part of an ultra-rare double no-hitter; his opponent, Bradford’s Frank Etchberger, posted both a no-hitter and the win.