This article was written by Bob Wood 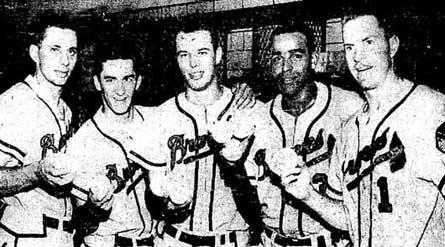 Baseballs were flying out of major-league ballparks in 1953. At the end of play on this Sabbath Day, the National League had smashed 1,008 home runs on the season. Batters needed to hit only 92 more to break the single-season mark, set in 1950.1

Anyone who liked watching batters club home runs undoubtedly enjoyed the doubleheader that the Braves played against the Pittsburgh Pirates on August 30, 1953, at Forbes Field.

The Braves were in second place, trailing the Brooklyn Dodgers by 10½ games, as they prepared for this Sunday doubleheader against the last-place Pirates. Milwaukee fans, though, could rightly note that their team was playing some of its best baseball of the season. The Braves’ 21-9 record in August rivaled their May record of 19-8. They had won their last six games against the Pirates, who were mired in a seven-game losing skid. Since July 4, Pittsburgh was a woeful 14-42, dropping its overall record to 41-93, 50 games behind the Dodgers.

The pitching in Pittsburgh had left much to be desired. The Pirates’ first-game starter, Johnny Lindell (5-15, 4.59)3, was a former outfielder who retired in 1950 after 10 seasons. (He also pitched 23 games for the Yankees in 1942.) Lindell worked his way back to the majors in 1953 as a knuckleball pitcher and was making his 24th start of the season. Milwaukee countered with Johnny Antonelli (10-9, 3.52). Things began innocently enough, with a scoreless first inning. The Braves seemed to miss a chance in the second inning, scoring only one run despite getting two walks and three singles, losing one runner at the plate and another caught stealing. Eddie Mathews hit the first home run of the afternoon in the third inning. It was the young slugger’s 26th homer on the road in 1953, breaking the record of 25 hit by Ralph Kiner for the Pirates in 1949.4 At home and the road, Mathews had 42 round-trippers, tops in the majors.

The Pirates got on the scoreboard in their half of the inning, as Lindell singled home Mike Sandlock for the 400th RBI of his career,5 a nice 37th birthday present to himself. It proved to be Lindell’s last success as a Pirate, as he failed to retire another hitter on the mound, and would be sold to Philadelphia the next day (August 31). Jim Pendleton led off the Milwaukee fourth inning with his second home run of the season. Sid Gordon walked and Jack Dittmer smacked an RBI double, ending Lindell’s tenure in Pittsburgh. Manager Fred Haney had seen enough, summoning Bob Hall from the Pirates bullpen.

By the fifth inning, the Braves had stretched their lead to 6-1. Then, they added a few more. First, Hall mishandled Antonelli’s sacrifice bunt. Hall retired Billy Bruton, but the extra out allowed Johnny Logan to come to the plate with two men on base and two men out. Logan launched his ninth home run of the season, extending the Braves’ lead to 9-1. Jim Waugh, who took the mound for the Pirates in the sixth, had already allowed 15 home runs in just 67 innings this season. It did not get better for the right-hander. With one out, Jim Pendleton and Del Crandall hit back-to-back homers. An inning later, Pendleton knocked his third homer of the afternoon, a three-run blast.

In the bottom of the seventh, Jack Dittmer greeted left-handed reliever Roger Bowman with a home run, his seventh of the season and the seventh of the day for Milwaukee, tying the Senior Circuit record, last done in 1950 by the New York Giants.6 (Pittsburgh teams had twice hit seven homers in one game, in 1894 and 1947.)7 Bowman retired Antonelli, but had runners on first and second when Mathews stepped to the plate. The slugging third baseman drove the ball out of the park for a three-run home run, and the Braves had set a new National League mark and tied the major-league mark (New York Yankees, June 28, 1939, against the Philadelphia Athletics).8

The blast extended Mathews’ record for home runs on the road to 27. It was the 20th hit of the game for the Braves, giving them 19 runs and 47 total bases. The NL record for total bases in one game in the twentieth century was 49, set by the St. Louis Cardinals in 1940. (Cincinnati totaled 55 bases in an 1893 game.9)

Left-hander Paul LaPalme started the nightcap for Pittsburgh, opposed by right-hander Bob Buhl of Milwaukee. The second batter of the game, Johnny Logan, drove his second home run of the day over the fence, tying the National League record of nine round-trippers in a doubleheader.10 The Pirates, showing some spark, scored a pair of runs in their first at-bat, then added a third run in the second inning. In the Braves third, Mathews, who had made an error in the second inning, atoned with a three-run home run, giving Milwaukee a 4-3 lead. With the smash, Mathews set a Braves season record of 43 home runs and an NL record of 28 home runs on the road. His homer tied the National League record of 10 home runs by a team in consecutive games.11

Pittsburgh came back with a two-run home run off the bat of Johnny O’Brien in the fifth inning to take a 5-4 lead. In the top of the seventh, the Braves rallied. Aided by an Eddie O’Brien error and a wild pitch, the Braves used three hits to score four runs, taking an 8-5 lead. Manager Haney summoned Johnny Hetki from the bullpen. With Mathews on first base, Joe Adcock hammered a pitch against the bricks for an inside-the-park home run, the 11th of the day by Milwaukee, breaking the league record.12

In the top of the eighth inning, Sid Gordon completed the barrage with a solo home run, his 18th of the season, raising the new NL record to an even dozen home runs. Only the Yankees had ever hit more in consecutive games, or in a doubleheader.13

In addition to the sources listed in the Notes, the author consulted Baseball-Reference.com and Retrosheet.org: