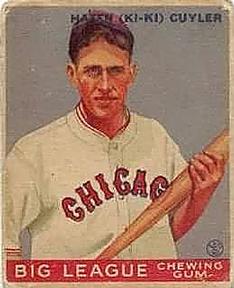 Kiki Cuyler finished in the National League top 10 six times in triples, five times in doubles, but only twice in homers. Cuyler’s Cubs had won 11 consecutive games, including four in a row over the Giants, going into the finale of a five-game Wrigley set.

With ace Lon Warneke on the mound, Chicago could reasonably expect a sweep. In 1932 Warneke finished second in the MVP race and paced the NL in ERA (2.37), wins (22), winning percentage (78.6), and shutouts (4). But even great ones have down days, and Warneke could not get anybody out.

Warneke walked Jo-Jo Moore and gave up a single to Hughie Critz that sent Moore to third. Player-manager Bill Terry tripled to put New York up 2-0. Mel Ott had an RBI infield single as the Giants went up 3-0. Freddie Lindstrom singled to chase both Ott to second and Warneke. Chicago rookie Bud Tinning got out of the jam.

Freddie Fitzsimmons took the mound for New York with a nice 3-0 lead on a day that featured anything but nice weather.1 The NL leader in range factor for pitchers this season, Fitzsimmons gave up a first-inning infield single to the mound by Cuyler, hitting third, but no one else reached base.

New York touched Tinning for a tack-on tally in the second. With two outs, Critz doubled. Terry notched his third RBI of the first two innings by singling Critz in, but do-it-all Cuyler2 threw out Terry at second.

Cuyler helped to get Chicago on the board in the third. Billy Herman led off with an infield single. With one out, Cuyler tripled Herman home, then Riggs Stephenson’s double made the score 4-2.

Tinning gave a run back in the fourth after failing to execute the last two of three straight chances. Johnny Vergez singled, and Fitzsimmons sacrificed him to second. Moore reached when Tinning could not throw out Vergez at third. Tinning then made an error3 on Critz’s grounder that allowed Vergez to score as New York went up 5-2.

The Cubs crept closer again in the bottom of the inning. Sparkplug Mark Koenig, who had come to Chicago earlier in August and would bat .353 in 33 games, tripled and scored when Rollie Hemsley, batting for Tinning, grounded to second. The Cubs now trailed 5-3.

The third pitcher for the Cubs, Bob Smith, worked five innings of scoreless relief through the ninth.

Meanwhile Fitzsimmons stayed on the hill for New York and nursed the two-run lead deep into the game. With one out in the eighth, Fitzsimmons, who throughout his career had “unusual control of the knuckleball,”4 walked Stephenson, only the second walk issued by the righty in the game. With two outs, player-manager Charlie Grimm doubled home Stephenson to cut the New York lead to 5-4.

With one out in the ninth, Frank Demaree batted for Smith and singled. Herman flied to center, and Fitzsimmons needed to retire just one more batter to break Chicago’s winning streak. Woody English came through with a single to chase Demaree to third and bring up Cuyler. With the game in the balance for a second straight hitter, Cuyler also singled, scoring Demaree to tie the contest, 5-5. English went to second.

Having taken over from manager John McGraw earlier in the season, Terry went to his bullpen now, a move that in hindsight seems too slow. He brought in Hi Bell. Curiously, Bell intentionally walked Stephenson to advance English to third and leave no margin for error. But Johnny Moore, a slightly worse hitter than Stephenson in 1932 although a much less accomplished one over their careers, followed. Moore grounded to second, and the game went into extra innings.

Grimm brought on Guy Bush, the winner of the previous day’s game after facing the final seven New York batters. Bush could not reprise his performance. Unfortunately for the Cubs, Bush mirrored Warneke, facing five batters and retiring none. He seemed to lose control of the game both figuratively and literally. He walked Doc Marshall and hit Vergez. Bob O’Farrell pinch-hit for Bell. Bush hit his second straight batter to load the bases. Jo-Jo Moore singled in a run as the Giants regained the lead at 6-5. With Critz up, Bush threw a wild pitch, Vergez scored, and New York went up 7-5. Critz singled in two more runs. Grimm (finally) yanked the wild Bush with Chicago down 9-5.

Making just the fifth appearance of his career and his first since August 19, rookie Leroy Herrmann came on for the Cubs. Facing Terry and Ott, Herrmann got three outs thanks to a combination of good defense by Chicago and bad baserunning by New York. Terry singled to left. Stephenson threw to third too late to get Critz, but English threw to Herman to get Terry. The New York player-manager had tried twice and failed twice to advance to second. Ott then flied to Stephenson, who got his second outfield assist in two batters by throwing out Critz trying to score. The play must have seemed trivial given the four-run lead the Giants enjoyed.

In his first season with the Giants and final campaign in the majors, Sam Gibson came on to close the 9-5 game. He retired the first two batters. For the third time, the Giants needed one more out to win. Koenig homered, and New York now led 9-6. For the fourth time, New York needed one more out, but Zack Taylor, batting for Herrmann, singled. For the fifth time, Terry’s team was just one out away, but Herman singled. For the sixth time (and second facing English), a Gotham pitcher had to put away one more Cub, but English singled. Taylor scored, and Cuyler came to the plate representing the potential winning run with Chicago trailing 9-7.

From first base, Terry had seen Gibson yield a homer and three straight singles. Would he stay in to face Cuyler, “a large dose of poison for the Giants in this series,”5 who had gone 4-for-5 in this game with three singles and a triple and had homered in three of the prior four games? Indeed: Terry did not get Gibson,6 and Cuyler “drove the ball into the centre-field bleachers”7 to give the Cubs an improbable 10-9 win.

More than a decade later, Cuyler remembered, “as I rounded third base, I looked over back of the dugout and there was my boy. He was 10 years old then, but he was standing up at least five inches taller than when the game started. I caught his eye as they carried me off on their shoulders … and I’ll never forget how he looked at me.”8

The Cubs would win 14 straight games and take the NL title in 1932. Gibson would spend 1933 in the minors before the Cubs purchased him after that season to package him, Herrmann, and four other players to acquire Augie Galan, who, like Cuyler, would star in the outfield and at the plate for multiple pennant-winning Chicago clubs.

1 “Rain delayed the game in the third inning and the remainder of the game was played on a sloppy field, with rain falling most of the time.” Associated Press, “Cubs Win in 10th for 12th Straight,” Boston Globe, September 1, 1932: 23.

3 Tinning struggled in the field as a rookie and made five errors in his first 23 chances.

6 Terry also failed to notice that Chicago batted out of turn in the last frame. “One of the first two men retired [in the 10th] was [Billy] Jurges, who pinch-hit for Pitcher Herrmann according to announcement, but … Taylor, who had come into the game the inning previous, should have been batting in Grimm’s place. Thus when Jurges batted he was legally batting for Taylor. After Koenig’s homer who comes up but Taylor, batting in the pitcher’s position, which was ninth. He should have batted three notches higher. But nobody had noticed the mistake after Taylor singled.” Irving Vaughan, “Cubs Omit Nothing in Taking 14 in a Row,” The Sporting News, September 8, 1932: 1.