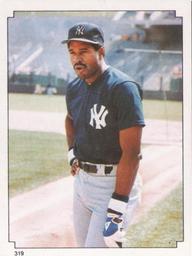 Fans flocked to Toronto’s Exhibition Stadium in record numbers1 to watch the Blue Jays soar to new heights in the summer of 1983, and those who turned out on this hazy, humid night were hoping for a four-game series sweep. Toronto sat one game out of first place while the Yankees, despite dropping the first three, were only four games behind in an extremely competitive division. (Six of seven AL East teams were over .500.) Because of the ballpark’s proximity to Lake Ontario, seagulls also flocked to Exhibition Stadium, circling above or occasionally landing on the field, waiting for fans to leave before devouring food scraps.

In the third, the same trio led the offense. Mattingly pulled a pitch to right for a single and moved up on another groundout to second by Wynegar. Winfield, in the midst of earning AL Player of the Week honors, drove Mattingly home again, this time with a double off the left-field wall. Graig Nettles walked, then he and Winfield moved to second and third when Toronto catcher Buck Martinez was charged with a passed ball on a sharp breaking pitch that Oscar Gamble swung through. Gamble grounded out to shortstop to score Winfield, giving New York a 3-0 lead.

Southpaw Shane Rawley toed the rubber on this night for the Yankees. In his first two starts of the season against them, he mastered the Blue Jays, pitching a shutout in Exhibition Stadium, then another complete-game victory over Toronto a week later at Yankee Stadium.

Toronto got on the board in the bottom of the third. Martinez hit a leadoff single and moved to second on a four-pitch walk to Alfredo Griffin. After Damaso Garcia flied out, Lloyd Moseby blooped a fly ball to shallow left that eluded three Yankees, loading the bases. Garth Iorg hit a chopper down the third-base line; Nettles fielded it and took it to the bag, forcing out Griffin as Martinez crossed the plate. Cliff Johnson then smacked a liner to the left of Nettles’ head, but the Gold Glove third baseman caught it for the third out.

After New York went down 1-2-3 in the top of the fifth inning, the Yankees took the field and began making the customary languid warm-up throws. As Griffin strode to the plate, Winfield turned to toss his practice ball to ballboy Jeff Pinchuk at the right-field foul line. What happened next would be debated endlessly. Did Winfield intentionally or accidentally throw his baseball at a seagull sitting in right field? What was indisputable was that his 75- to 80-foot one-bounce throw struck the seagull in the neck, killing it.

“That bird had been on the field for three innings. It was just sitting there. It kind of looked a little sickly to be honest with you. It was just moving slowly,” recalled Constable Wayne Hartery, the on-duty policeman.2 “Looked like there was something wrong with it in the first place. Didn’t you see the way its feet kind of skidded out underneath when it landed?” said Yankees coach Jeff Torborg.3

Fans began booing Winfield and some threw rubber balls at him throughout the rest of the game.4 Hartery sent Pinchuk out to retrieve the carcass. Pinchuk covered the dead seagull with a towel and took it off the field.

Play resumed and Rawley settled into a rhythm. He walked Griffin but then set down 10 straight batters, with seven outs on grounders. Cliff Johnson drove a ball deep to center in the sixth but Winfield leapt at the wall to catch it.

Stieb settled in as well. After yielding a double to Don Baylor leading off the sixth, he retired the last 12 Yankees batters for his 10th complete game of the season. “He threw well all night but we just didn’t get him any runs. That’s it. We had plenty of time to catch up but just couldn’t hit Rawley,” lamented Martinez.5

The Blue Jays’ final chance to rally fizzled out in the ninth as Johnson led off with a single but was promptly erased on Jesse Barfield’s double-play grounder to second. George Bell popped up to end it, giving Rawley his third complete-game win over Toronto in 1983.

The game was finished but the drama was just beginning for Winfield.

During the game, Hartery consulted with his staff sergeant and determined that Winfield should be arrested and charged for the seagull’s death.

“Get the cuffs!” joked Gamble as Winfield walked into the clubhouse with his hands up.6

Instead of discussing his hot bat, his catch at the wall or his league-leading 15 game-winning RBIs, reporters asked Winfield about the ball he threw at the seagull. “Sincerely, I would never hit an animal on purpose. It wasn’t intentional,” Winfield declared when told police were waiting outside the clubhouse to question him.7

Suddenly, the lighthearted mood changed to disbelief. “I could understand the fuss if it was a blue jay but it was just a gate-crashing seagull,” Nettles said.8 “Boy, they really hate us up here,” said closer Goose Gossage.9 As for Winfield’s intent, manager Billy Martin was predictably combative. “Ridiculous. That’s the first time Winfield’s hit the cutoff man all year. They can never get on me for pine tar when they’re talking about dead seagulls,” he said, alluding to the controversy he precipitated 11 days earlier.10

“I’ll tell you one thing. When Toronto comes down to New York next week, we’re going to get their four starting pitchers arrested. We’re going to have somebody call the police and say they were molested in the hotel,” Martin added.11

Winfield went to Metropolitan Toronto Police 14 Division, where he was charged with causing “unnecessary suffering of an animal” under Section 402.1(a)of the Criminal Code of Canada, punishable by six months in prison or a $500 fine.12 Toronto general manager Pat Gillick graciously paid a $500 bond for Winfield, enabling him to be released from custody after one hour at the police station.

The next morning, Norm Matusiak, a senior crown attorney, reviewed the case.“It is always a key issue to find criminal intent, and I am satisfied there was none here,” Matusiak said.13 The police added that “after a lengthy phone conversation with Winfield,” Matusiak would go to Provincial Court on August 12 to formally withdraw the charge against Winfield.14

“I consider the whole incident a regrettable overreaction,” said Toronto Mayor Art Eggleton. “We went overboard on this one, and it sure doesn’t help Toronto’s reputation. I just can’t appreciate why Dave Winfield was taken to a police station. … Maybe he was trying to shoo [the seagull] away, but I’m sure he didn’t intend to kill it.”15 Yankees owner George Steinbrenner was also critical: “To subject him to the treatment that Toronto officials did was ridiculous.”16

Although 66 percent of 462 respondents to a Toronto Star poll said the city should not apologize to Winfield over his arrest,17 Metropolitan Toronto Chairman Paul Godfrey nonetheless visited the Yankees clubhouse between games of a Monday doubleheader in New York the following week. “I expressed to him how unfortunate the series of incidents that took place in Toronto were,” Godfrey said.18 Winfield agreed. “We had a cordial, frank discussion. There were no hard feelings. We thought it was blown out of proportion and it didn’t make anybody look good.”19

What happened to the seagull?

At University of Guelph, northwest of Toronto, Ian Barker, a professor of wildlife pathology, performed a necropsy on the bird the day after its death. He confirmed what Constable Hartery and Torborg observed on the field the night before: The seagull was already sick. “It had reduced muscle mass, no fat, one of these young birds that was going to die within a week or 10 days. There was a little bacterial infection in its wing, a number of things that were going on. It was a debilitated bird.”20 Barker concluded that the “bruise on the brain, and … hemorrhaging around the base of the brain [was] due to the blunt force trauma of the baseball hitting the head.”21

Winfield brought closure to the bizarre episode when he returned to Toronto in the winter for a charity dinner with a painting he commissioned depicting three seagulls flying over a shore and a red maple leaf. At the bottom, an inscription read: “To the Canadian people committed to the preservation of their values and resources. David M. Winfield.” The painting was auctioned off for $32,000 and proceeds were donated to the Easter Seals Society, benefiting physically disabled children. “I thought this would be an appropriate way to come back to the country, to express to the people my feelings,” Winfield said. “I hope things have cooled down a bit.”22

Besides the sources cited in the Notes, the author also consulted the Baseball-Reference.com and Retrosheet.org accounts of this game and an oral history of the “Seagull Game” compiled by Katie Daubs, cited in the Notes, but also freely available online.

1 A crowd of 36,684 watched this game, bringing the total attendance for the series to 117,375, the highest attendance for a series of any length in Blue Jays history, 1,720 more than any previous series.

10 Ibid. (In the top of the ninth inning at Yankee Stadium on July 24, 1983, Kansas City third baseman George Brett hit a two-out, two-run home run off Gossage to give the Royals a 5-4 lead. Martin came out of the dugout and charged that Brett’s bat had more than the legally allowed 18 inches of pine tar on it and therefore the home run should be nullified. After extended conversation and a measurement of the bat across home plate (17 inches wide), home-plate umpire Tim McClelland called Brett out, ending the game. In one of the most replayed sequences in televised baseball history, Brett furiously charged onto the field at McClelland, gnashing his teeth and flailing his arms wildly while being restrained by second-base umpire Joe Brinkman. Kansas City filed a protest that AL President Lee MacPhail upheld four days later, noting that the umpires’ decision was “technically defensible, [but] not in accord with the … spirit of the rules.” The “Pine Tar Game” was completed on August 18, two weeks after the “Seagull Game.”)

12 Ryan, “Jays’ Night Strictly for the Birds.” (Unless indicated otherwise, all monetary figures are in Canadian currency).