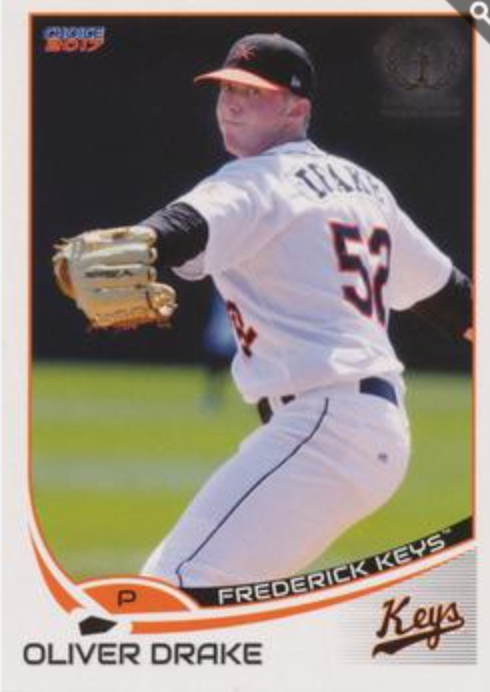 Whenever pitcher Oliver Drake changed teams in 2018, his hometown of Gardner, Massachusetts, commemorated each transition. Drake’s father, Jay, would walk to John’s Sports Shop to buy the baseball cap of his son’s new team. “Every time they saw me come in that summer, they knew they had another sale,” said Jay.1

Oliver Drake established a major-league record on August 4, 2018, when he pitched the final inning in the Minnesota Twins’ 8-2 win over the Kansas City Royals; it was the fifth team he had pitched for during the 2018 season.

Ten years earlier Drake was a 43rd-round draft pick in 2008 by the Baltimore Orioles. When he reached the majors in 2015 with the Orioles, he was only the third player from the US Naval Academy to reach the major leagues.2

In 2017 he was a middle-innings relief specialist with the Milwaukee Brewers.3 He had three wins and a save in 61 games. He allowed just 16 percent of inherited runners to score, about half the league average.

Drake got off to a rocky start in 2018. After 11 games with Milwaukee, he had an ERA of 6.39. He was striking out more than a batter an inning but allowing too many walks and hits. On May 1, Drake was designated for assignment.4  He’d go to the minors unless another team claimed him.

With only one full season as a reliever before 2018, Drake “had not established himself as a reliable major league pitcher,” observed former Mets and Orioles general manager Jim Duquette, now an analyst for SNY and MLB radio. “But his delivery and overall stuff was unique enough that multiple teams were willing to add him to their roster as an upgrade over what they currently had on their roster.”5

On May 5 the Cleveland Indians purchased Drake. He pitched well in three games but was ineffective on May 25. He was designated for assignment the next day.6

On May 31 the Los Angeles Angels claimed Drake. After four inconsistent games, he was sent to Triple-A Salt Lake City. The Angels recalled Drake on July 6, but he remained erratic. He was DFA’d on July 23.

The Toronto Blue Jays claimed Drake three days later. He pitched twice before he was DFA’d for a fourth time on July 30.

Duquette explained how front offices viewed Drake. “Each team that placed him on waivers thought they had an “upgrade” over Drake and therefore placed him on waivers in the hopes that they could retain his services in Triple A,” he said. “But each claiming team felt in the short term he could help them on their major league roster without a major investment on their part, knowing in the long term, they likely weren’t losing a high upside reliever if and when they decided to put him on waivers.”

To the media and fans Drake’s odyssey was an oddity. For him, it was an unforgiving season with memorable moments:

Those midseason moves have an impact on the baseball field, said Tampa Bay Triple-A pitching coach Rick Knapp, who coached Drake in 2019 and 2020. “Just think about having to change jobs five different times and you’re going to do that in a five-month period in the summer,” he said. “That takes its toll. … A lot of people say these guys are making a lot of money and they shouldn’t worry about that sort of stuff. You also have to understand these guys are human.  They’re not machines. There’s a physical toll that it takes, traveling.”13

On August 3 Drake was claimed by the Twins. Minnesota chief baseball officer Derek Falvey said, “I think … he can be a successful major-league reliever, maybe more so than his surface-level stats,” He said that Drake’s .390 average on batted balls in play could be attributed to changing teams and bad luck.14

Drake arrived in Minneapolis a day later for a 6:45 P.M. game against the Kansas City Royals.  “We landed around 2:30-ish,” Drake said. “I just came straight here to the ballpark to get ready and meet everyone and get prepared for the game.”15

The Twins were in second place in the AL Central Division with a record of 50-58, nine games behind the Indians, who were en route to the their third straight division title. The Royals, three seasons removed from a World Series championship, were in last place in the division at 34-75.  As starting pitchers Jose Berrios (Twins, 10-8, 3.56) and Burch Smith (Royals, 1-2, 6.00) warmed up, Drake joined the Minnesota relievers in the bullpen.

The Royals led 2-1 after three innings on Alex Gordon’s two-run third-inning single. Eddie Rosario had hit a solo home run, his 20th, in the first inning for the Twins.

The Twins exploded for seven runs in the next four innings to take an 8-2 lead. Two scored on Max Kepler’s home run in the fourth, and another on Rosario’s second RBI on a sacrifice fly in the fifth. Smith was pulled from the game in the sixth with two runners on base. Both scored off reliever Glenn Sparkman on a double and fielder’s choice. Logan Morrison added a two-run homer in the seventh off Sparkman.

Berrios left after seven strong innings, set up for his 11th win. He allowed five hits, struck out six, and threw 70 strikes in 106 pitches. Addison Reed pitched a scoreless eighth for the Twins as did Jason Adam of the Royals.

With Minnesota three outs from victory, Twins manager Paul Molitor called on Drake to close out the game — and make baseball history. Drake needed 19 pitches to accomplish the task.  Former Brewers teammate Brett Phillips, who had been traded to the Royals in late July, led off. On a 2-and-2 count, Phillips struck out looking. Alcedes Escobar flied out to left for the second out, and Sal Butera’s grounder to short ended the game. Drake said it was “a good first step”16 to prove he could pitch well consistently.

Twelve players had previously played for four teams in a season.17 Drake had broken the record with 57 days remaining in the season. The Baseball Hall of Fame requested a memento. Appropriately, the Twins sent an August 28 game-worn cap, like the one Jay Drake bought a few weeks earlier.18

“I don’t know if this is something I’ll brag about,” Drake said about the five-team record. “It’s definitely cool having all the jerseys. That’s going to be something that, looking back, is going to be a cool collection. It’ll definitely be a neat story, especially down the line after the baseball career is over.”19

Drake was impressive with Minnesota. In 19 games he pitched 20⅓ innings, striking out 22 and giving up 12 hits. His opponents’ batting average on balls in play was .204, well under the league average of .294.20

Looking back, Drake said, “It got tough at times, especially later in the year because you’re trying not to live and die with every outing and wondering, “If I have a bad one am I going to be on the move again?”21

What helped him get through the season? “I’m very fortunate that I have a strong support system — my wife, my family, and my friends,” Drake said. “Even when times got tough, they’d stay super optimistic and that helps you get into a positive mindset.”22

2 Drake was eligible for the June 2008 free-agent draft after his second year at the Naval Academy because he had turned 21 in January. He was able to sign with the Orioles that summer because he did not have to commit to Navy service until the start of his junior year in September.

3 Drake appeared in three games with Baltimore and was traded to Milwaukee on April 13.

4 When a player is designated for assignment he can be traded or claimed by another team within seven days.  If neither occurs, the player can be sent to the minors or released, depending on his service time and prior “DFAs.”

11 Lindbergh. Drake also worked out at the Cressey Sports Performance in Hudson, Massachusetts, about 45 minutes from his home.

20 Drake’s effectiveness continued in 2019 with the Tampa Bay Rays, who purchased him from Toronto in the offseason. He had a 3.21 ERA in 50 games with a WHIP of 0.982 and 11 strikeouts per nine innings. His dominance resulted in a $1 million contract with the Rays for 2020.