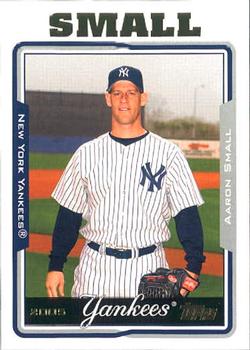 The starting pitcher for the Yankees was Aaron Small. In the late 1980s, he, Jason Giambi, and future Yankee Cory Lidle pitched together at South Hills High School in West Covina, California. When asked which one was the best, Giambi smiled and said, “I think if you were to ask scouts back then, I think they’d say Aaron. He was tall (6-feet-5) and he threw 90 mph.”1

But before he was called up on July 17, Small had pitched only 16⅔ innings in the major leagues in the past seven years and hadn’t started a game in the majors in nine years. He had been released by five teams and waived by another three. Nevertheless, he had pitched well so far, winning both of his starts.

Gustavo Chacin started for the Blue Jays. He entered the game with a record of 11-5 and an ERA of 3.28. That ERA would soon rise.

Derek Jeter led off the game with a triple off the right-field wall. After Robinson Cano struck out, Gary Sheffield hit a frozen rope over the left-field wall, giving the Yankees a 2-0 lead.

Sheffield had recently caused a stir when he implied that he, not Jeter or Alex Rodriguez, was the most important Yankee. “I know who the leader is on the team,” Sheffield said. “I ain’t gonna say who it is, but I know who it is. I know who the team feeds off. I know who the opposing team comes in knowing they have to defend to stop the Yankees.”2

Sheffield continued, “I know this. The people don’t know. Why? The media don’t want them to know. They want to promote two players in a positive light and everyone else is garbage.”3

The day before the game, he left no doubt as to his meaning. Sheffield said, “Jeter is our captain. He’s not the leader.”4

After Sheffield’s homer cleared the bases, the Yankees wasted no time restocking them. Rodriguez walked, Hideki Matsui singled, and Giambi walked. Although he had faced only six batters, Chacin was down by two, faced a bases-loaded situation, and was a double away from giving up a cycle. It was a blowout in the making. But Jorge Posada grounded into a third-to-first double play and the Blue Jays had at least survived the first salvo. They trailed 2-0.

In the bottom of the first, leadoff batter Russ Adams was hit by a pitch, Frank Catalanotto struck out and Vernon Wells walked. But Small kept the Blue Jays from scoring when Shea Hillenbrand flied out and Corey Koskie grounded out.

Neither team scored in the second or third inning. The Yankees got runners on first and second with nobody out in the third, but Matsui hit into a double play and Giambi flied out to end the threat.

The Yankees added to their lead in the fourth. With one out, they loaded the bases when Bernie Williams lined a single to center and both Andy Phillips and Jeter walked. Plagued by wildness, Chacin had already walked five. Again the Yankees were poised to take a big lead. But with a little luck, Chacin minimized the damage. Cano cracked a line-drive sacrifice fly, scoring Williams. Then Sheffield flied out to end the inning. The Yankees now led 3-0.

From the second inning through the fourth, Small allowed only one baserunner. That was on a single by Koskie with two outs in the fourth and was the first hit Small gave up. He had thrown his sinker effectively, inducing five groundouts.

Small’s sinker would prove particularly valuable in the fifth and sixth innings. In the fifth the Jays got runners on first and second with nobody out on singles by Eric Hinske and Reed Johnson. The runners advanced when Orlando Hudson grounded out to first base. With first base open, Small walked Adams to load the bases. Then Catalanatto grounded into an inning-ending 6-4-3 double play.

Yankees pitching coach Mel Stottlemyre told Small what to do when he got in a jam, “Don’t try to add on (throw harder).  “I told him, ‘Don’t worry,’” Small said. “I can’t add on. When I get in trouble, I have to take off.”5

“If you try to throw harder in those situations, the ball flattens out,” Yankees catcher Posada said. “He just lets the ball do what it does, sink.”6

In the sixth the Jays again got the first two men on base. Wells doubled and Hillenbrand singled, putting runners on first and third. Small got Koskie on a pop foul for the first out. Once more he snuffed the rally with a groundball double play. This time, Gregg Zaun was the victim.

The Yankees were held scoreless in the fifth by Chacin, and in the sixth and seventh by his replacement, Brandon League.

So the Blue Jays still trailed by only three when they finally broke through against Small in the seventh. For the third consecutive inning, their leadoff man reached base when Hinske ripped a double down the first-base line. Again, when Small went to the well, he found water. He retired Johnson and Hudson on two more groundballs as Hinske moved to third. Then Adams lined a single to left, Hinske scored, and the lead was cut to 3-1. Alan Embree relieved Small and retired pinch-hitter Alex Rios to end the inning.

The Yankees got that run back and one more in the eighth. Their first three batters, Matsui, Giambi, and Posada, singled to produce one run. After Williams struck out and Tino Martinez (who had replaced Phillips at first) walked, loading the bases, Jeter singled through the third-short hole. The hit drove in Tony Womack, running for Giambi, and the Yankees stretched their lead to 5-1.

In the top of the ninth, the Yankees bought more insurance. They manufactured a run when Rodriguez walked, went to second on an error, moved to third on a grounder, and scored on Womack’s sacrifice fly. The lead became 6-1.

Though Embree had retired all four batters he faced, he was replaced by Tanyon Sturtze to start the ninth. Sturtze did what he could to get the Jays back in the game, giving up a lineout, a walk, two singles, and, consequently, a run. With Rios coming to bat and the tying run on deck, Sturtze’s short leash was retracted to none at all. Manager Joe Torre brought in his meal ticket, Mariano Rivera. Rivera retired Rios on a flyball, got his 28th save, and preserved a 6-2 victory for the Yankees.

From 1989 through 1993, the Blue Jays finished first in the AL East four times and won two World Series championships. But now they were in the midst of a long dry spell. In part because the Yankees had dominated the division, the Jays had not made the playoffs since 1993 and would not do so again until 2015, a 21-year drought.

Small went on to win all five of his starts in September and finished with a record of 10-0. Before he was called up, Small was considering retirement. “I guess the good Lord had other plans for me,” he said.7

On June 12, after a 3-11 stretch, the Yankees had stood at 30-32, fourth in the AL East. Between then and the end of August, they reeled off two six-game and two five-game winning streaks. Even so, they had spent only one day in first place since the first week of the season. In September the Yankees went on an 11-1 run and moved into the top spot. They were eliminated in the first round of the playoffs by the Los Angeles Angels, three games to two.

For the Yankees, Rodriguez led the AL in runs scored, home runs, slugging percentage, and OPS and won the Most Valuable Player Award for the second time. Rodriguez and Sheffield won Silver Slugger Awards. Jeter won a Gold Glove and Giambi won the Comeback Player of the Year Award. Rodriguez, Rivera, and Sheffield made the All-Star team.

Toronto’s monthly won-lost records for 2005 were remarkably consistent. Their best record was 15-12 in May; their worst was 13-15 in both August and September. Such is a prescription for a mediocre record and Toronto finished thus, 80-82, third in the AL East, 15 games out of first place.

For Toronto, Hudson and Wells won Gold Gloves and Roy Halladay and Hillenbrand were All-Stars.