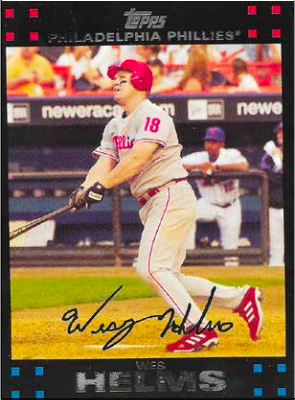 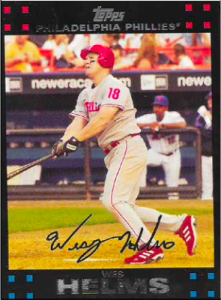 Phillies fans would be forgiven if they had turned off the broadcast of the Sunday afternoon game at Milwaukee on August 5, 2007, in the late innings. The Brewers held a 6-1 lead going into the ninth. They had won the weekend’s previous two games, including a stunning comeback win from a 5-1 deficit the night before. The Brewers were also riding a seven-game win streak against Philadelphia at Miller Park.1

As for the sellout home crowd, they were likely preparing to celebrate another strong win by their division-leading team against a third-place team. Instead, they went home in shock.2

Milwaukee built an early lead, getting to Phillies starter Adam Eaton in the bottom of the first. Leadoff hitter Corey Hart singled to center. After recording an outfield fly and an infield popup, Eaton walked Prince Fielder, Milwaukee’s cleanup hitter. Three straight doubles then gave the home team a solid lead. First, right fielder Kevin Mench doubled to right, scoring Hart. Geoff Jenkins was next with a two-bagger to center that brought in Fielder and Mench. Catcher Damian Miller plated Jenkins with his own double. Eaton intentionally walked the Brewers’ number-eight hitter, Craig Counsell, to get to opposing pitcher Jeff Suppan, who ended the inning with a groundout.

Neither team was able to score again until the bottom of the fifth. Ryan Braun, the Brewers’ rookie third baseman, greeted Eaton with a leadoff home run. It was his 20th since joining the club 64 games earlier – a new team record.3 After retiring Fielder on a groundout, Eaton gave up a second double to Mench. Jenkins singled him home, prompting Phillies manager Charlie Manuel to replace Eaton with Clay Condrey, who stopped the bleeding. The day’s performance left Eaton with an NL-worst 6.09 ERA. He had had trouble in the first two innings of the games he pitched, with a 7.63 ERA over the first two but then a 5.25 ERA from the third inning on.4 Responding to reporters’ questions about how he could improve, Eaton replied, “Maybe just go after it in the first inning then settle in,” before admitting he didn’t really have an answer.5

After managing only two singles and a walk through five innings, the Phillies finally got on the board in the sixth, thanks in part to Suppan. With one out, singles by Tadahito Iguchi and Pat Burrell put two on. Suppan then uncorked a wild pitch that put them on second and third. After Ryan Howard popped up, center fielder Aaron Rowand hit a single to deep short, bringing home Iguchi. Milwaukee skipper Ned Yost then pulled Suppan, replacing him with Brian Shouse, who retired pinch-hitter Wes Helms to end the threat.

The Philadelphia bullpen held Milwaukee to a couple of isolated hits, and the Phillies’ offense was poised to strike again in the top of the eighth. Jimmy Rollins, who had challenged his team at the start of the season by calling them “the team to beat in the NL East,” drew a leadoff walk from Carlos Villanueva.6 Iguchi doubled to left, putting runners on second and third with no outs. Yost went to Scott Linebrink, who shut the door on the threat, striking out the next three Phillies.

The visitors fared better in the ninth. After pinch-hitting for Linebrink in the eighth, Yost handed the five-run lead to Matt Wise. Wise had struggled some since hitting Cincinnati’s Pedro Lopez in the face with a pitch on July 25, including walking the only two batters he faced in his previous outing. He induced a comebacker from Wes Helms (who had stayed in the game to play third base), but was unable to make the play, allowing Helms to reach safely. The next batter, center fielder Jayson Werth, took him deep to left for a two-run home run. Wise admitted that hitting Lopez was still affecting him, but said he had no choice but to get past it.7

Yost decided to bring in closer Francisco Cordero, who earned saves in the first two games of the series. He retired the next two batters but walked Rollins on four pitches. Rollins went to second uncontested, and Iguchi followed with an infield single. Cordero then walked Burrell and hit Howard with a pitch, sending Rollins home with the Phillies’ fourth run. Rowand then came up big. After falling behind, he worked a full count before powering a shot down the third-base line that got past Braun. Two runs scored for the Phillies, tying the game. Helms popped out in his second at-bat of the inning, but the damage was done. Braun said after the game that it was a play he should have made.8

Phillies relievers J.C. Romero and Brett Myers (the team’s main closer) combined to strike out the side in the bottom of the ninth, sending the game to extra innings. Derrick Turnbow similarly shut down the Phillies in the 10th, with two strikeouts and a groundout. Myers came back for the 10th, giving up a single among three groundouts.

Manny Parra took the mound for Milwaukee in the 11th. He got two quick outs but Howard was able to work a four-pitch walk. Rowand singled to center, Howard taking second. Helms was next. He hit Parra’s first pitch deep into the right-field corner, bringing in both Howard and Rowand and giving the Phillies an 8-6 lead. A walk to Werth and Chris Coste’spopup ended the inning.

The Phillies sent Jose Mesa in for the bottom of the 11th. Mesa was the Phillies’ primary closer from 2001 to 2003, but he bounced around to three teams before being released by Detroit and returning to the Phillies in June. Braun, his first batter, led off the inning with a hit to deep center that looked as though it would go for extra bases but was corralled by Rowand. After Mesa retired Fielder and walked Mench, Jenkins doubled to deep right, sending Mench to third. Yost sent former Phillie Johnny Estrada to pinch-hit for Miller. With first base open, Mesa put him on intentionally. Craig Counsell had the chance to turn the game around again, but he lined Mesa’s first pitch to Iguchi, sealing the win for the Phillies.

Mesa made light of the outcome, saying, “Sometimes it’s better to be lucky than good.”9 Regardless, Mesa earned his only save of the year, which was also his 112th as a Phillie – a franchise record.

Braun summed up the home team’s perspective, saying, “It’s a game we should have won. … We let them back in the game.”10 Asked if the Phillies’ win was poetic justice for the night before, Yost replied, “I don’t like poetry.”11Manuel partly agreed with Mesa. “I figure it’s real lucky,” he said, adding, “We come back on you.”12 Helms agreed, saying, “You never give up. … That’s just the nature of this ballclub.”13

In addition to the sources listed in the Notes and Retrosheet’s game record, the author used ESPN’s pitch-by-pitch record (espn.com/mlb/boxscore?gameId=270805108) to reconstruct this game.

2 Tom Haudricourt, “A Slap in the Face; Phillies Pay Back Brewers with Own Dramatic Rally,” Milwaukee Journal Sentinel, August 6, 2007.