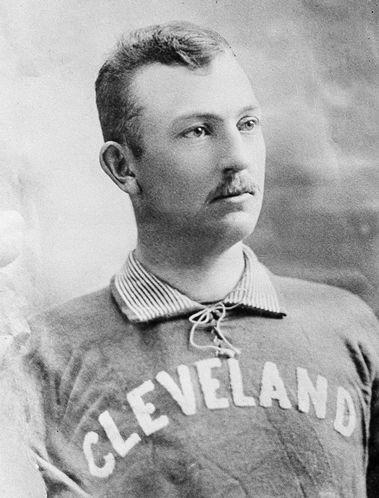 “You ought to have seen it. Mr. Young, formerly of Canton, O., now of this beautiful city of trees and pretty girls, made his debut yesterday at League Park.” — Leader and Herald, August 7, 1890

“Well boys,” murmured Adrian “Cap” Anson as he rose from his downy couch at the Hollenden Hotel in Cleveland, Ohio, “we’ll have two easy victories to-day, because I’ve induced this Cleveland club to agree to a double game this afternoon.” Chicago’s star player was confident going into a doubleheader with the Cleveland Spiders on August 6, 1890, but as Chicago’s Inter-Ocean later commented, “Mr. Anson had forgotten that Cleveland had engaged a new phenomenon in the way of a pitcher, or he wouldn’t have felt so sure of a double headed victory. The new phenomenon is named Young.”1

That phenom was Denton True Young. He would pitch for the next two decades, and his 511 victories are the stuff of legend in baseball history. Young’s reputation was already making the rounds that day, as the Inter Ocean noted “he is the man who not many moons ago struck out eighteen in a game.”2 Playing for a minor league Canton club, Young not only had 18 strikeouts against McKeesport on July 25, but also didn’t allow a hit, with only one batted ball making it to the outfield.3 Both clubs belonged to the Tri-State League.4

With the National League Cleveland Spiders club facing competition from the rival Cleveland Infants team in the upstart Players’ League, signing a young phenom who was already gathering local attention was a win-win for all involved. Reportedly, Cleveland sent manager Gus Schmelz and some players to see Young throw at Pastime Park in Canton. Wanting to show off his best fastball, Young wound up knocking a couple of boards off the grandstand. “One of the fellows said the stand looked like a cyclone struck it,” Young reportedly recalled. Whether an apocryphal tale or not, the newspapers began calling him “Cyclone Young,” which was eventually shortened to “Cy.”5

Young was met at the train depot in Cleveland by members of the Spiders. He was dissuaded from purchasing a return ticket to Canton in case his time on the mound was a disaster. “Well, I’ll pitch a game,” Young said, “and if I win I’ll stay. If I lose I’ll go home this evening.”6 Cy Young may have been that close to spending the rest of his life on the farm instead of dominating the pitcher’s mound.

Sporting Life reported that Young and another player went to a tailor in Cleveland to be fitted for uniforms. Team secretary George Howe ordered the tailor not to make Young’s uniform until after he had pitched a game. Following Young’s winning debut, there was a mad scramble to get the uniform finished.7 Young was definitely there to stay.

Young debuted for Cleveland in the first game of the Wednesday,August 6, doubleheader “dressed in a pair of misfit pants and a baseball shirt several degrees of color,” wrote the Plain Dealer. “This led to the wicked boys on the bleaching boards to call him ̔Jed Prouty Young’ and ̔Josh Whitcomb’ and other derisive names.”8 Young was described by the Cleveland Leader andHerald as “a tall, very well put together, and athletic young man of sundry summers. He pitches the ball. Not hardly that, either, rather he sends lessons in geometry up to the batter with a request for solution. Mr. Young seems to know as much about curves as an engineer on a railroad in West Virginia.”9 Young later remembered wearing a shirt with “Canton” written across the front because of his “inability to find a Cleveland shirt large enough to contain his proportions.”10

Cleveland was 24-60, seventh in the eight-team National League, 32 games behind first-place Brooklyn. Chicago was 43-41 and in fifth-place, 13 games behind. Chicago would become the best team in the league for the remainder of the season, going 40-12 and finishing second, only 6 ½ games behind Brooklyn. Their pennant drive was just too little, too late. Opposing Young was Chicago’s 30-year-old right-hander William “Wild Bill” Hutchinson. Hutchinson would win 41 games for the Colts that season, leading the National League.

Chief Zimmer may be the most responsible for Young’s feeling comfortable on the mound that day. Up to that point, no suitable catcher had been found to catch Young, as “he throws the swiftest ball of any pitcher ever seen in this city,” reported the Repository newspaper in Canton.11 The veteran catcher would catch the majority of Young’s games throughout the 1890s, with the pair becoming one of the best batteries in all of baseball history. Young remembered in 1911 how Zimmer had given him the sign for a fastball but he mistakenly threw a curve. “Now, look here, young fellow,” Zimmer said. “You must learn to watch my signs a little closer. I called for a fast one and you gave me a curve. A thing like that might have lost us the game. You’re just starting in. Now, please watch what I tell you to pitch, and if you’re bound to pitch something different, let me know about it. You’re doing fine. Just remember and it will help you win a lot of games you’d lose otherwise.” Young said, “I made up my mind right there that the finest man God had ever created was my catcher, Chief Zimmer.”12

Cleveland secured all the runs they needed in the first inning which the Leader and Herald said “put a great big load of confidence into Young’s heart.”13 Ed McKean walked, and Hutchinson threw wild to Anson, giving Will Smalley first and sending McKean to third. Jake Virtue walked. McKean scored on an error by Tom Burns, and Smalley and Virtue scored on a hit by Buck West. Cleveland led 3-0.

Virtue was also commended for a play at first base, at some point during the game, in which grabbing a grounder to first “he saw he wasn’t going to be able to quite reach the base so he made a headlong slide to the bag and put his man out,” wrote the Leader and Herald. “That’s the way to play ball.”14

If not for Young’s own error, his first major league start would have been a shutout. The Colts scored their only run, unearned, in the fourth. Walt Wilmot walked, stole second, and went to third on Young’s bad pickoff attempt at second. He scored on a Burns single.

Cleveland added moreruns over the sixth, seventh, and eighth innings. In the sixth, George Davis doubled to left, advanced to third on a West single, and both players scored on Joe Ardner’s double down the right field line. “That was the occasion of rapturous applause from the galleries,” wrote the Leader and Herald.15

In the seventh, a McKean walk was followed by a Virtue home run to center described as “two parasangs16 over Wilmot’s head…half way to Newburg.”17 The joyous crowd sounded a “salvo of vocal artillery that could have been heard in Glenville.” Hats were flying at the excitement, and you could witness “big, strong men hugging each other convulsively,” according to the Leader and Herald.18

In the eighth, Zimmer tripled, or “knocked all the knots out of the left field fence with a three-base hit that was loaded to the muzzle with ginger” and scored on a Ardner single, to give the Spiders their 8-1 final edge.

“That night the young lad’s name was on every tongue,” recalled Stanley Robison in 1910. “He was Cy Young, farmer, who became a famous baseball pitcher in one day, and who has been making good ever since.”19

“He was as cool as though he were home at Canton, instead of making his initial bow before a National League audience” Charles Mears of The Sporting News commented on Young’s debut. “Young is a tall, well put-together young man, who seems to have made a study of sharp angles.”20

In 1904, Young recalled for The Sporting News the sarcastic remarks he received from the Chicago players, which made him even more determined to win the game. “I’ve won many more important games since then,” he said, “but none that gave me half the satisfaction that victory did.”21

In addition to the sources listed in the Notes, the author also relied on the Baseball-Reference.com website and Alvin K. Peterjohn’s “The First Year of Cyclone Young,” in the 1976 SABR Baseball Research Journal.

4 The “tri-state” reference in the League’s name was to Ohio, Michigan, and West Virginia, dating to 1888. In 1890, however, there was no Michigan representative in the Tri-State League, but there was a Pennsylvania team, the McKeesport Tubers, Young’s July 25 victims.

8 “Young’s Great Work. The League Club’s New Find Turns out to be a Wonder,” Cleveland Plain Dealer, August 7, 1890: 5; Jed Prouty and Josh Whitcomb were both fictional country bumpkin characters in plays during the era who leave their rural farms to explore the big city, with hilarious results.

19 Alfred Henry Spink. The National Game: A History of Baseball, America’s Leading Out-door Sport, from the Time it was First Played Up to the Present Day. St. Louis: National Game Publishing Co., 306.