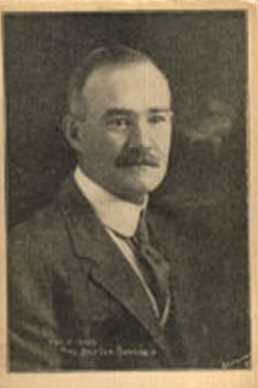 The name George B. Dovey is unfamiliar to most modern-day baseball fans, but in the early 1900s Dovey was well known in both the world of baseball and in the coalfields of western Kentucky. Born in Pennsylvania on April 18, 1862, he moved to Kentucky during his youth and spent several years working for the family’s coal mine near Central City in Muhlenberg County.1 He also played semipro baseball in Paducah and later moved to St. Louis, where he made a name for himself in the railroad business.2 In November 1906 Dovey became president of the Boston Beaneaters after he and a group of investors (including his brother John S. Dovey) purchased the team.3

Although it had been many years since he had lived in Central City, George Dovey fondly remembered his time there and still had many friends and acquaintances in the area. In a goodwill gesture, he arranged for the Doves — as the press had begun to call the team after the Dovey name — to play in Central City on April 6, 1907, as part of the Doves’ post-spring-training exhibition tour, but the game was postponed until August 7 after the death of right fielder Harry “Cozy” Dolan from typhoid fever.4 To make room on the Doves’ schedule for the new date, Dovey canceled their game that day against the St. Louis Cardinals and rescheduled it as part of a doubleheader on August 11.5 Eagerly anticipating the showdown between the Boston nine and a semiprofessional team “gathered together from the surrounding neighborhood,” the 2,000 or so inhabitants of Central City prepared a grand homecoming for Dovey.6

Dovey and the Doves, whose 38-57 record put them in seventh place in the National League, left for Central City on August 6 after a road series against the Cincinnati Reds.7 Boston’s National League franchise was in the early stages of what turned out to be a 16-game losing streak, from August 2 through August 17. They were also in the middle of a 10-season stretch, from 1903 through 1912, that saw them finish no better than sixth in the league.8

Despite the Doves’ record and late hour of arrival — their train reached Central City after midnight — a large crowd was on hand at the depot to greet them. The “flattering reception” in the middle of the night foreshadowed an even livelier atmosphere the next morning.9 Businesses, factories, and coal mines shut down, and excursion trains brought fans to Central City from the surrounding counties. The players gathered early in the day outside the Sandusky Hotel to mingle with the excited locals. Enjoying their spirited welcome “to its utmost,” the Doves “allowed the enthusiasts to feel their muscle [sic], pat them on the back, and take other liberties with them, which the ordinary city baseball fan would never dream of taking.”10

The residents of Central City treated Dovey and the Doves to a dinner at the city park around noon and then staged a parade to the field.11 Opened on April 6 — the Doves had been scheduled to play in the first game there before the cancellation — the field prominently featured a 1,000-seat grandstand.12 However, those seats alone could not hold the “record-breaking” crowd: “Every foot of available space was occupied in the grandstand and bleachers and the centerfield fence was lined with a surging mass of humanity.”13

While the game had been advertised as Boston versus Central City, the Doves loaned the Central City team five players to strengthen their lineup. The 45-year-old Dovey also suited up for Central City and played shortstop.14 After two innings Boston held a 2-0 lead, but the Central City squad evened the score in the third. Both teams scored in the fourth to make it 3-3. Two defensive gems in the middle innings stood out as the finest plays of the afternoon. In the fifth, “pandemonium fairly reigned for several minutes” when Dovey snagged third baseman Bill Sweeney’s hot smash and doubled up shortstop Al Bridwell at second.15 In the fourth or sixth inning (depending on the source), Irv “Young Cy” Young, who alternated between pitching and playing the field for Central City, dazzled the crowd when he speared a hard-hit liner in center off the bat of left fielder Newt Randall.16 “It was a wonderful catch,” the Louisville Courier-Journal reported, and “one old man said he had never seen the like of it before.”17

The game remained tied until the eighth, when Boston scored two runs to take a 5-3 lead. Central City put a run on the board in the ninth, but the Doves held on for a 5-4 victory. Boston had 13 hits for the game, while Central City collected 11. Dovey was arguably the star for Central City. In addition to turning the double play, he collected three singles and stole a base. Right fielder Johnny Bates and catcher Sam Brown led the way for Boston with three hits apiece.18

The gala day in Central City had come to an end. Dovey and the Doves took a train to Owensboro, Kentucky, where they spent a few hours before they left at midnight for St. Louis.19 The Doves’ time in Kentucky was one of the team’s few memorable moments of the 1907 season. On their way to a 58-90-4 record and a seventh-place finish, they lost 24 of 30 games in August, and the pitching staff posted a league-worst ERA. However, the Doves played .500 ball over their last 33 games (15-15-3), good enough to keep them comfortably ahead of the cellar-dwelling Cardinals.

After the Doves left Central City, some area baseball fans may have thought they would never see another major-league team in action. After all, baseball exhibitions involving major-league teams were a rarity outside Kentucky’s largest cities and the Cincinnati suburbs, and Dovey did not indicate whether he would return with the team.20 As it turned out, however, any such fears were misplaced. In August 1908 Dovey brought his Doves back to his Old Kentucky Home for another exciting exhibition contest.21

In addition to the Sources cited in the Notes, the author consulted the Baseball-Reference.com and Retrosheet.org websites.

5 At least one newspaper reported that the canceled game against St. Louis was rescheduled for Friday, August 9. See: “Dovey in Old Kaintuck,” Pittsburgh Sunday Post, August 8, 1907: 6. However, Baseball-Reference.com indicates that the game was made up as part of a doubleheader on August 11.

7 “Red-Letter Day for Central City: Boston National League Team Play There This Afternoon,” Louisville Courier-Journal, August 7, 1907: 7. Although this newspaper article and the one cited in Note 6 have similar titles, they should not be confused as one and the same.

8 Boston, by then known as the Braves, reached fifth place in 1913. A year later, the “Miracle Braves” won Boston’s first NL pennant since 1892 and swept the Philadelphia Athletics in four games in the World Series.

15 “President Dovey at His Old Home”; “Dovey Shares the Honors.”

16 The Louisville Courier-Journal reported that Young’s catch took place in the fourth inning. The Boston Globe, meanwhile, wrote that it happened in the sixth. See: “President Dovey at His Old Home” and “Dovey Shares the Honors.”

20 Retrosheet indicates that the following Kentucky cities hosted in-season major-league exhibition games between 1871 and the time of the Central City game: Covington, Frankfort, Lexington, Louisville, Ludlow (a suburb of Cincinnati), and Paducah. Most of the exhibitions took place in the 1870s and 1880s. Indeed, in-season exhibitions were rare in Kentucky by the 1890s. During that decade only four — three in Louisville and one in Paducah — were played in the Bluegrass State. See: https://www.retrosheet.org/InSeasonExhibitionGames1871-1920.htm (accessed July 2021). Pre- and postseason exhibitions were likely also played in Kentucky, but the exact number and where they were played has not been determined. The combined number of offseason and in-season exhibition games held in Kentucky could not have been large, however. Otherwise, it seems inconceivable that the Louisville Courier-Journal would have made the following mistake in its coverage of the Doves’ 1908 return to Central City: “Central City may well boast the honor of being the only city in Kentucky, with the exception of Louisville, in the days of the old National League, that has ever had the opportunity and distinction of stacking up against the big league teams.” Louisville Courier-Journal, “Great Crowd Expected: Central City Fans Awaiting Arrival of George Dovey and Boston National League Team,” August 16, 1908: 30.

21 For an account of the second game in Central City, see “Central City Plays a Splendid Game: Flowers and Presents Showered on George Dovey and His Boston National League Team Before a Big Crowd,” Louisville Courier-Journal, August 27, 1908: 6.