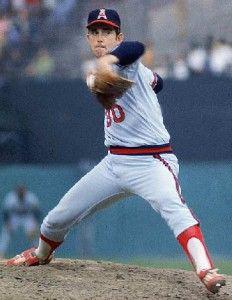 In the first week of August 1974, Americans could be forgiven for watching the events of the day unfold through their fingers. The Watergate scandal was at the top of the news, and many wondered how long President Richard Nixon would remain in office. On Monday, August 5, a bomb exploded in a public locker at Los Angeles International Airport, killing two people and injuring 36.1 One of the injured died later.2

Through this maelstrom, 11,636 people, including the author, chose the normalcy of a ballgame on a Wednesday night in Chicago, where the White Sox were entertaining the California Angels for the second game in a three-game series. The pitching matchup was the primary attraction this night, with fireballer Angels ace Nolan Ryan facing the aging but still effective White Sox left-hander, Jim Kaat. Those at the ballpark expecting a pitchers’ duel would not leave disappointed.

Ryan, well on his way to leading the AL in strikeouts for the third consecutive year, entered the game 14-11, including a 2-1 record against the White Sox. Kaat had seen a resurgence since his trade from the Minnesota Twins in August 1973, and was 12-8 heading into this star. In his last start, on August 3, Kaat lasted only 3⅔ innings, giving up seven runs against the Texas Rangers. Ryan and Kaat had faced off on July 30, with Kaat besting Ryan in 10 innings, with both pitching into extra frames.

Ryan started the stronger of the two. Kaat gave up a leadoff single to Mickey Rivers, but he was caught stealing as Kaat struck out Rudy Meoli. Ryan struck out the side in the first, and was given the lead when Frank Robinson hit his 568th career home run deep into the left-field grandstand to lead off the second. Ryan had another strikeout in the second, and after striking out Jorge Orta and Dick Allen in the fourth (both for the second time), it was starting to look as if the one-run lead might hold up. After the game White Sox manager Chuck Tanner said of Ryan, “He had the best stuff tonight I’ve ever seen him have.”3

Kaat was not as sharp as Ryan had been early, but had settled down since the Robinson bomb, giving up only a couple of singles through the fifth. Ryan found himself in trouble in the bottom of the fifth, walking both Ken Henderson and Bill Melton to lead off the inning. Asacrifice by Bill Sharp put two runners in scoring position with one out, but Ryan did what he did best, striking out White Sox catcher Brian Downing and inducing Bucky Dent to ground out weakly to short. Kaat found himself in trouble in the sixth when with one out Rivers hit his second single of the game and moved to third on Meoli’s single. But like Ryan just moments earlier, Kaat got himself out of trouble when Leroy Stanton grounded into a double play, ending the threat. Those would be the last baserunners Kaat would allow the Angels.

Ryan just kept mowing down the White Sox as the game entered its final third, still without allowing a hit. The Sox were again struck out in order in the seventh, and Ryan struck out Downing for a second time to start the eighth inning. Groundouts from Dent and Pat Kelly finished the inning, and Ryan was now three outs away from his third no-hitter. He had thrown his first two in 1973, becoming the first Angel to throw a no-hitter as well as the first pitcher to throw multiple no-hitters in the same year since Virgil Trucks performed the feat in 1952.4 He also had a one-hitter on August 29, 1973, against the Yankees and another on June 27, 1974, against Texas, but in both cases the hits came in the first inning. If he finished the task, Ryan would trail only Sandy Koufax in career no-hitters.5

Meanwhile, as Ryan chased history, Kaat went about his business. When he retired Stanton on a grounder to second to end the ninth inning, he had retired the last 10 hitters he faced. Kaat later commented,  “With all the attention (Ryan) was getting, they were forgetting about me.”6 The Los Angeles Times reported, “The partisan crowd of 11,636 gave the 27-year-old Ryan a thunderous ovation as he went to the mound in the bottom of the ninth,”7 but I can report that from the section in the third-base upper deck where I was sitting in with my parents, we were standing and applauding the efforts of Kaat. On the way to the dugout, Allen told Kaat, “Old timer, we’re going to win this game.”8

In order to win the game, the Sox were going to need baserunners. Ryan had walked five through eight innings, the last being Allen in the sixth. Leading off the ninth was Orta, and Ryan struck him out for his 13th of the game, giving Orta, third in the league in batting average at the start of the game, the dreaded Golden Sombrero signifying four strikeouts in a game.9 Allen followed with a checked-swing roller up the third-base line. Meoli made a good pickup and throw, but Allen was called safe and credited with the first White Sox hit.10 Angels manager Dick Williams was surprised when he saw the replay after the game. “We thought we had him. We thought he was out.”11 Said Allen, “It goes to show you it doesn’t take a home run to win them.”12  Carlos May followed with a hard smash to first that Bruce Bochte fumbled for an error, and the White Sox had the baserunners they needed with Allen at second and the speedy Lee “Bee Bee” Richard running for May at first. Ken Henderson’s clean single plated Allen and sent Richard to third, with Henderson advancing to second on the play. Henderson said of Ryan “He was throwing super. He was as tough in the late innings as he was in the early part of the game. We just had to battle him.”13White Sox slugger Melton had a chance to end the festivities, but Ryan got him on a foul popout, bringing up Sharp. Sharp’s bunt on the first pitch was allowed to roll foul, but his single to right gave the White Sox the walk-off victory.

“That’s the way it goes,” said Ryan in a quiet Angels locker room. “You can’t lose one much tougher than that.”14 “When he started out, I thought he was as overpowering as he looked against Detroit when he struck out 17 and pitched a no-hitter,” said Angels broadcaster Don Drysdale.15 Ryan agreed: “I thought my stuff was as good as in the two no-hitters. Except maybe against Detroit I was a little better. Maybe I lost a little off my fastball in the ninth.”16

Ryan would get his third no-hitter later that year, with a 4-0 win over the Twins in his last start of the season, finishing with a record of 22-16. Kaat would finish the season with 21 wins, joining his teammate Wilbur Wood and the Kansas City Royals’ Steve Busby as 20-game winners who did not receive one vote for the Cy Young Award. President Nixon’s season ended early, as he announced his resignation from office the next evening, August 8. The LAX Bomber, eventually known as the “Alphabet Bomber,” was arrested on August 20 and convicted six years later.17

In addition to the sources listed in the Notes, the author accessed Retrosheet.org, Baseball-Reference.com, SABR’s BioProject via SABR.org, The Sporting News archive via Paper of Record, and the Chicago Tribune and Los Angeles Times via newspapers.com.

5 At that time, Sandy Koufax had the most career no-hitters, four. Cy Young, Bob Feller, and Larry Corcoran had three.

9 For origin and variations see baseball-reference.com/bullpen/Golden_Sombrero.