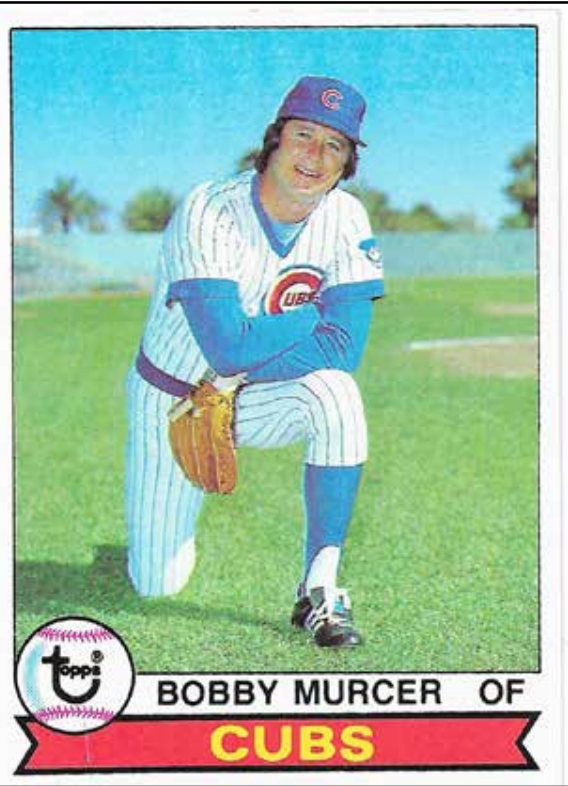 On a day when a sparse crowd was hoping to see its home team sweep its first series of the season, Atlanta Braves fans left the game with a shocking surprise. With a 5-0 lead in the ninth inning, a Braves victory seemed a sure thing. Even after their reliable closer gave up two singles that yielded three Cubs runs, a Braves win was still in sight. However, Cubs outfielder Bobby Murcer had other ideas, as he clouted a three-run home run with two outs to down the Braves, 6-5.

Braves left-hander Larry McWilliams had turned in a masterful two-hit shutout going into the ninth. He ran into trouble by loading the bases and relinquished the mound to Gene Garber, who couldn’t shut down the Braves.

The 33-year-old Murcer, an eight-year veteran of the New York Yankees who also put in two seasons with San Francisco, had hit only nine home runs for the Cubs the previous season, and his struggle continued at the beginning of the 1979 season; he had hit only one home run coming into the game. He was starting to fall into disfavor with the Cubs’ front office, although his teammates had selected him as team captain, a role he had previously shunned. He didn’t think he had the requisite personality to carry out its responsibilities.1

On the Braves’ side, Dale Murphy, who was in his second full season with the team, led the team in home runs at the time. His slash line was .328/.410/.701 with 8 home runs and 17 RBIs in what would become his breakout season.

A small crowd of 5,041 attended the game at Atlanta-Fulton County Stadium. The Chicago Tribune surmised that most Atlanta fans had stayed home to watch the basketball Hawks on TV in the NBA playoffs. However, the Braves’ recent level of play probably had something to do with the crowd size, too.

McWilliams was getting his fifth start of the season for the Braves, but his 7.59 ERA coming into the game was not indicative of the performance he would turn in. Cubs manager Herman Franks went with right-hander Dennis Lamp, who had won his only two starts after beginning the season out of the bullpen.

The Braves pushed across a run in the first inning and added two more in the third, on back-to-back doubles by Gary Matthews and Jeff Burroughs.

McWilliams’s control was a bit shaky; he issued six walks, but he managed to get out of innings without scores. He even helped himself at the plate by hitting a double off Lynn McGlothen in the sixth inning. He scored on Jerry Royster’s single to give the Braves a 4-0 lead.

It appeared the Cubs had thrown in the towel, as Franks let McGlothen bat for himself leading off the top of the seventh. Murphy added another run in the seventh inning with a solo home run off McGlothen.

A tired McWilliams was sent out in the top of the ninth, because Braves manager Bobby Cox wanted to give him a chance to record a shutout. He had given up only two hits, but allowed a leadoff single to Dave Kingman, then walked Steve Ontiveros. After McWilliams retired the next two batters on fly balls, Ted Sizemore, a .250 hitter with no home runs, stood between him and his shutout. McWilliams walked Sizemore to load the bases.

Cox called on oft-used Garber to put out the fire. As the Braves’ primary closer, he had made four multi-inning appearances in the six previous Braves games that resulted in a win, two losses, and a save. Perhaps Garber’s best-known relief effort occurred the year before, when he struck out Pete Rose in the ninth inning to deny Rose’s bid for a 45-game hitting streak.

Garber could have used a strikeout now, but instead gave up a two-run single to Tim Blackwell. Pinch-hitter Larry Biittner then delivered a run-scoring single to make the score 5-3.

With two runners on base, Murcer hit a fastball for a home run, clearing the right-field fence 10 feet inside the foul pole and putting the Cubs ahead, 6-5. Bruce Sutter closed out the bottom of the ninth to clinch the miraculous comeback victory, but only after allowing runners to reach second and third. Murcer said, “I’ve seen it happen a few times … in 16 years. You’ve just got to get lucky for something like that to happen.” He added, “I just wanted to hit the ball hard someplace. It was a sinker down and in. I wasn’t really sure if it would be off the fence or what.”2

Cox said in hindsight, “I probably should have brought Garber in to face Sizemore. Larry was very tired.”3 He added, “Nine times out of ten, the game is locked up in that situation and I’m headed home. Geno is our man in that situation. But it happens sometimes.”4

Blackwell observed, “Most of our hitters have been off to a slow start, including Bobby. But we elected Bobby team captain because of his leadership and experience. He’s the one we look to out on the field and the captain came through in the clutch today.”5

The loss was consistent with Braves fortunes in April. They held the worst record in the National League. Royster reflected the team’s disgust, saying, “Can we afford to blow games like that? If we are going to win any, we have to take games like that when we are completely in command. This is awful.”6

Sutter got his fifth save of the season. Having emerged as one of the top relievers in the National League during his previous three major-league seasons, he wound up winning the Cy Young Award in 1979.

Murphy was on the verge of an All-Star career. He wound up hitting 21 home runs for the season, missing almost two months because of an injury. His breakout year occurred the next season (33 home runs, 89 RBIs), followed by two National League MVP seasons in 1982 and 1983.

The 38-year-old Cox was in his second season with Braves, who finished with the second-worst record in the National League (66-94). He served two dissimilar terms with the Braves. In his first four seasons with the Braves, his teams posted a 266-323 record. After a four-year stint as manager for Toronto and five years as the Braves GM, he returned to the Braves dugout in 1990. During the decade of the ’90s, his teams won five pennants and one World Series. He managed the Braves through 2010 and was elected to the Baseball Hall of Fame in 2014.

Murcer’s dramatic home run temporarily put him back into the Cubs’ good graces; but they decided a couple of months later that they no longer wanted him. They shopped him around to other teams, despite his no-trade contract. When the Murcer agreed to go back to the Yankees (with whom he had played from 1965 to 1974), the Cubs traded him on June 26 for minor-leaguer Paul Semall.7 He was with the Yankees when his best friend, Thurman Munson, was tragically killed in a private plane crash on August 2. Murcer finished out his career with the Yankees in 1983.