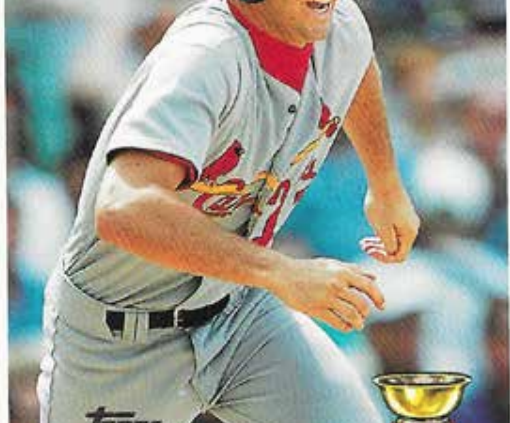 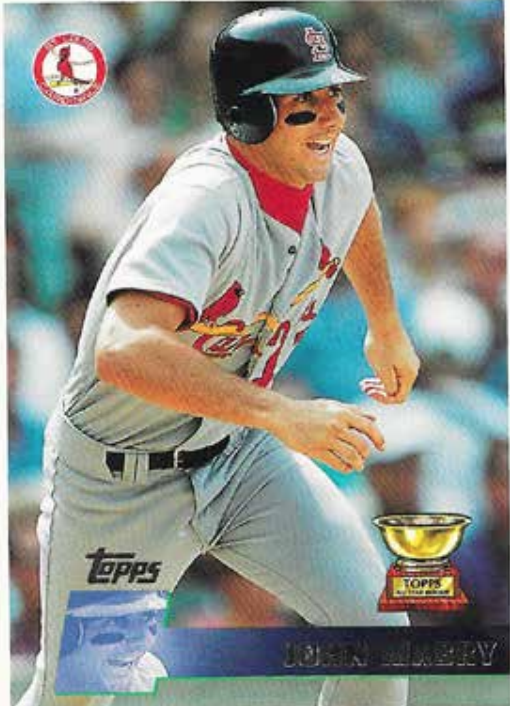 In the first month of the 2005 season, the St. Louis Cardinals had again established themselves as the force of the National League. The Cincinnati Reds, meanwhile, faced a nine-year playoff drought and had returned to near the cellar of the Central Division.

On a 49-degree night in early May, the Reds and an official attendance of 15,961 hosted the Cardinals at the Great American Ball Park (early in its third year) for the teams’ second series of the year. The home team appeared to have the game in hand through eight innings, potentially handing the Cardinals their fourth loss in five games.

The fans who remained witnessed the largest ninth-inning comeback in Cardinals history.

Eric Milton, who had signed a three-year contract in the offseason, started the game for Cincinnati, while Chris Carpenter, the Cardinals ace who was on his way to the Cy Young Award, took the mound for the visitors.

After a scoreless first two innings, the Cardinals’ So Taguchi, filling in for a resting Larry Walker in right field, lined a fastball into the left-field seats for the game’s first run – the 11th home run allowed by Milton in the young season after allowing a NL-leading 43 the year before. Carpenter, meanwhile, breezed through the first four innings, striking out six while allowing three hits.

The Reds got on the scoreboard in the fifth inning on a home run by Rich Aurilia, the team’s new shortstop after franchise cornerstone Barry Larkin retired in the offseason.

The Cardinals struck back in the sixth inning to take a 2-1 lead. First baseman Albert Pujols led off with a double and scored on an error after first baseman Sean Casey was unable to scoop third baseman Joe Randa’s throw – a precursor to the fielding woes set to plague the Reds in later innings.

Ken Griffey Jr., the center field superstar who had his best season in Cincinnati in 2005, led off the home half of the inning stuck in a power slump, having homered just once in April. Opposite him was Carpenter, against whom, among active pitchers, Griffey had gone the most at-bats (22) without a home run.

He hit a pitch from Carpenter to center field, off what was initially considered to be the outfield wall and back into play. Griffey ran into second base with an apparent leadoff double, but crew chief Ed Montague brought the umpiring crew together and broke a 2-2 tie in favor of giving Griffey a leadoff home run and his second homer of the year.1 He ended up hitting 35 home runs in 2005, something he did eight times and just twice with the Reds.

The Reds then loaded the bases on a single by Casey, a walk, and first baseman Pujols’ throwing error. Aurilia drove in Casey with a sacrifice fly to give the Reds their first lead of the game.

Catcher Jason LaRue hit the next pitch down the right-field line for a two-run double, and the Reds led 5-2. Carpenter recorded the next out to complete the inning and his outing, finishing with a line of six innings pitched, five runs (two earned), and eight strikeouts.

The Reds also went to their bullpen in the seventh with Ryan Wagner relieving Milton, who also pitched six innings while allowing two runs (one earned) and recording five strikeouts.

Cardinals catcher Yadier Molina, in his first season as the team’s primary backstop, led off the seventh with a double. He scored two batters later on a David Eckstein sacrifice fly, bringing the Cardinals within two runs.

Carmen Cali remained in the game to start the home half of the eighth after holding the Reds scoreless in the seventh. Left fielder Adam Dunn deposited his first pitch of the inning into the right-field stands to make it a 6-3 game and Randa followed by doubling down the left-field line, sending Cali to the showers and setting up more Reds insurance.

Randa scored on Aurilia’s double off new reliever Jimmy Journell, who struck out the next two batters to potentially hold the score at 7-3. A single and two walks brought another run around to score and pinch-hitter Felipe Lopez singled home another to make it 9-3, Reds.

Heading into the ninth inning, the Cardinals had a 1 percent chance at winning, according to Baseball-Reference.com’s Win Probability Chart, and were set to lose their third straight game, something they hadn’t yet done in 2005.

Molina, the light-hitting catcher with an on-base percentage of only .197 entering the game, led off facing reliever David Weathers, who came into the game after two-time All-Star closer Danny Graves stopped warming up with the home team extending its lead in the eighth inning.

The Cardinals backstop drew a walk, and Abraham Nunez followed with another. Eckstein poked a single to right field to load the bases. Pinch-hitter Roger Cedeno struck out on three pitches, stalling the visitors’ momentum.

Up came Pujols, who entered the game hitting .417 with runners in scoring position.2 The eventual National League MVP hit a groundball to Aurilia for what appeared to be a game-ending double play. The Reds got the force out at second base, but Casey, the first baseman, was unable to make the pick, allowing Molina to score and the rally to continue.

Reggie Sanders, the veteran outfielder signed by the Cardinals in 2003, brought Nunez home with a single to left field, making it 9-5.

Reds manager Dave Miley turned to his bullpen, bringing in Graves, who had completed his first eight save opportunities in 2005 after a career-high 41 in 2004. He had yet to give up a home run in his first 11 appearances of the year and Edmonds, who along with Pujols and third baseman Scott Rolen made up the club’s three-headed “MV3” moniker for their middle-of-the-order potency, had gotten just three hits off him in 16 tries to date.

Graves hung a curveball and Edmonds, homerless since April 19, hit it into the right-center-field stands for a three-run home run. The Cardinals were within a run of tying the game, but still an out away from losing.

Mark Grudzielanek, the beneficiary of a misplay by Casey in the sixth inning, again found himself on the receiving end of one after hitting a hard groundball to the first baseman that he was unable to corral.

John Mabry, who had started the game at third base in place of an ailing Rolen, came to the plate homerless so far in the season. He sent Graves’ first pitch over the center-field wall – not far from where Griffey’s controversial sixth-inning home run hit – for a two-out, two-run go-ahead home run. The Cardinals had scored seven runs in the frame, including six with two outs, to take the lead.

Boos rained down from the Cincinnati fans, but the game wasn’t over yet.4

Closer Jason Isringhausen was on the disabled list, leaving Julian Tavarez, who had just one save in the season, to close out the comeback.5

Randa hit a leadoff single to left field, putting the tying run on base. Aurilia tried to sacrifice him to second, but Molina pounced on the bunt and recorded the force out at second base. LaRue was hit by a pitch, but a groundball to shortstop by right fielder Austin Kearns turned into a game-ending double play – the twin killing the Reds weren’t able to turn in the Cardinals’ half of the inning.

“It’s not easy to give a big-league game away, but we did,” Miley said.6

The comeback was the biggest for the Cardinals since they came from eight down against the Reds on May 12, 2002, and the biggest ninth-inning comeback ever for the team.7

For the Reds, it was the first time they blew a six-run lead in the ninth inning since 1952. The Reds released Graves, the only Vietnamese-born player in major-league history, later in May.8

The Reds finished in fifth place in the Central Division, 27 games behind the Cardinals, who came within two games of repeating as National League champions after winning 100 games in the regular season – none more improbable than this one.

In addition to the sources mentioned in the Notes, the author consulted the Baseball-Reference.com box-score and game logs.

8 Bob Nightengale, “‘I Was OK with Not Living’: What Happens When an All-Star Pitcher Suffers From Depression,” USA Today, September. 29, 2019.