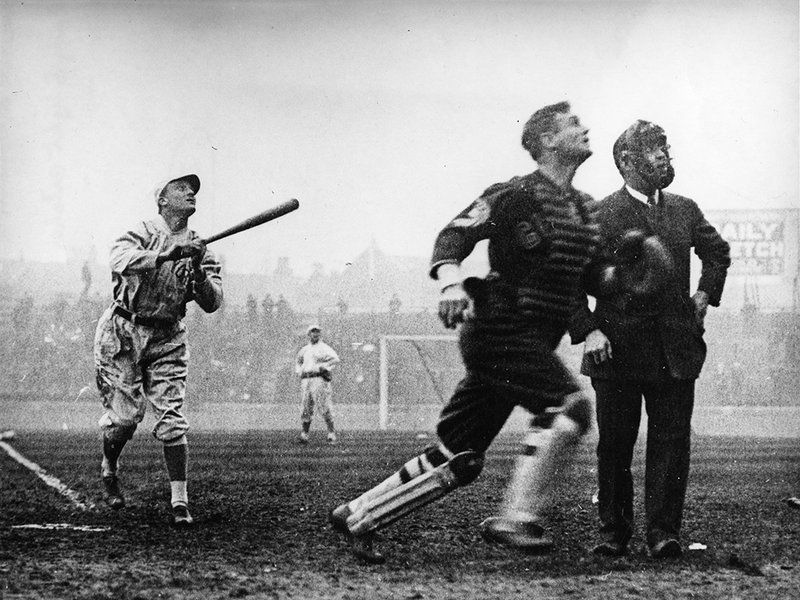 “‘Why,’ said an American after the match, ‘your crowd applauded all the fly hits. In the States the crowds only let us know when we miss ’em.’” — Sydney Morning Herald, January 2, 1914

The steamship St. Albans roared into Brisbane, Australia, on January 1, 1914. This was “an American invasion” of Australia on New Year’s Day, wrote the Brisbane Courier, but “a peaceful one, this invasion to-day of Australia by citizens of the great republic of the West.” The baseball world tour had arrived. The tour was organized by New York Giants manager John McGraw and Chicago White Sox owner Charles Comiskey, who hatched out the tour in Smiley Corbett’s bar in Chicago on a cold December night in 1912. The tour began after the 1913 World Series and continued to the spring of 1914, with stops that included China, Egypt, the Philippines, and France, in addition to Australia. “They come, not to annex us nor to claim an indemnity — not even to establish an insurance company,” wrote the Courier, “they are missioners of sport, of good sound athleticism of the game of baseball, which is the national game of the United States.”1

McGraw himself wrote the New Year’s game summary for the New York Times. “We enjoyed the trip all the way,” McGraw said of the trip from Manila, “as the weather was delightfully tropical. Many of us slept on the deck at night.” They swam in the swimming pool and had a Christmas party complete with a tree “on which there was a present for everybody.” McGraw received a white elephant and Nixey Callahan, White Sox manager, a pair of white socks. “We all sang Christmas carols and thought of friends at home,” McGraw reported. “The Australian scenery is magnificent.”2

“Weeks of publicity spiked public anticipation,” wrote James E. Elfers, whose definitive book The Tour to End All Tours: The Story of Major League Baseball’s 1913-1914 World Tour tells the story of the tour from start to finish.3 “Brisbane’s large media contingent was anxious to interview the athletes and write profiles about the game.” The players, however, were more anxious for the small parcels of mail awaiting them, the first such messages from home since November. The players had longed for the “familiar handwriting, scented letters, and recognizable postage stamps,” Elfers wrote, which “brought a smile to every face. A few were seen literally dancing for joy.”4

Also present were “a phalanx of journalists,” the Courier wrote, “smoking huge cigars, taking mint juleps and cocktails in rapid succession.”5 The players were sleep-deprived, with festivities ending around 4:00 A.M. Only two hours later, Overland Motor Cars arrived, players went on a sightseeing tour of the sleeping city which “under a bright morning sun looked at its best,”6 wrote the Courier. As the packed two dozen automobiles bounced along the city, the Washington (DC) Evening Star noted how “many of the machines looked mighty familiar with the names of American makers on the radiators or hub caps.”7

The caravan returned to the St. Albans for a reception hosted by the state government. Attorney General Thomas O’Sullivan spoke of the “friendly feeling” between the two countries, based on “a common origin, a common language, and common traditions.”8 Then the players motored off to play ball at the Exhibition Oval, also known as the Brisbane Cricket Grounds, for a game which began around 10:00 A.M. or 10:30 A.M., depending on the source. The game had to be finished by noon, as the St. Albans was departing for Sydney at 1:00 P.M. and “it was not found possible to hold the steamer by which the party was booked to proceed from this point on their journey around the world,” noted the Chicago Tribune.9

The game itself, said the Sydney Morning Herald, “provided a clever, scientific exhibition, in which catching was a feature.”10 A crowd of 5,000 was on hand. Many “knew little of the game, having seen it played but once or twice in the last 25 years,” yet they “showed marked appreciation of the more spectacular features of the play,” as well as “the stentorian voice of the umpire,” who yelled out player introductions instead of using the megaphone.11 John Sheridan and Bill Klem were the umpires.

McGraw and Callahan were introduced to the crowd. “The function of each of these men,” the Herald wrote, “is to enter the field when his side is batting, and to advise the men when to make their dash in from third base to the home plate.”12 The ball was described as being the same size as a cricket ball, and the bat was a “tapering club, about 3ft [sic] long, which is capable of sending a ball up to 150 yards, though none of the hits yesterday were so sensational as that,” and the circular design of the bat “accounts for a lot of balls flying off behind the batter and out of play.”13 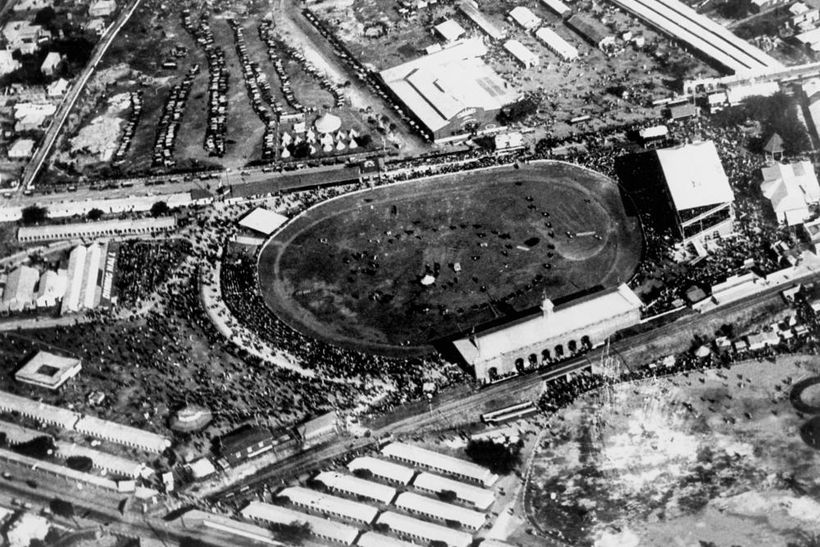 Joe Benz, pitching for the White Sox, would turn 28 later that month, and was coming off a 7-10 season with a 2.74 ERA in 1913. Red Faber, pitching for the Giants, was the top prospect in the White Sox system. When the Giants’ Christy Mathewson declined to go on the tour, Chicago loaned Faber to the Giants, meaning Faber pitched against the team he would pitch for over the next 20 years.14This was not the only player changing his uniform. Players from other teams also joined the tour to provide depth and also attract a crowd. Among them, Comiskey added outfielders Tris Speaker (Boston Red Sox) and Sam Crawford (Detroit), while McGraw added the best known athlete in the world at that time, Olympic hero Jim Thorpe.

The Giants batted first and went scoreless. In the bottom of the first the White Sox scored a run15 as Speaker made a “fine, low, straight hit to the far fence” and “scored two bases.”16 Crawford “made a good shot”17 to center field, scoring Speaker and giving the White Sox a 1-0 lead. In the second inning, Tom Daly walked, or received “four wides” in cricket lingo. Steve Evans was robbed of a hit by Larry Doyle, who “had to run back a long way to secure it.”18

The score remained 1-0 into the seventh, when Mike Donlin of the Giants singled to center and then “stole another clever base.”19 Thorpe singled and Donlin “made a dash for home, sliding in narrowly,”20 and the game was tied 1-1. Andrew Slight, Chicago’s starting catcher (who never played in the major leagues), was injured late in the game and was replaced by Jack Bliss, a National League veteran attempting to resurrect his career.21

In the eighth inning, Doyle reached base and stole second. Fred Merkle “made a good hit, and amidst great cheering Doyle ran home from centre base.”22 The Giants led 2-1. According to the Courier, “there was a fine finish to the game.”23 In the ninth, Speaker walked and “Crawford did a tricky ‘punt’ and scored one base,”24 Speaker moving to second. With the bases loaded, Bliss “made a poor stroke, and Speaker, who made an heroic dash for home, was easily run out, and a fine game was over.”25

“The majority of the spectators knew little or nothing about the game, but they were quick to appreciate the wonderful speed of the players and the skillful manner in which the fielders caught the ball,” wrote The Age newspaper of Melbourne.26 They were also “amused at some of the agile slides for base made by members of the batting side and the equally smart work of the fielding side in trying to run them out.”27 Australian game accounts contrasted the “sparkling catches” in the field with the “somewhat milder form of catches seen on the cricket field.”28

One such sparkling catch was by Buck Weaver, Chicago’s shortstop or “the equivalent of short-leg at cricket.”29 On a hard-hit ball, Weaver “moved to intercept, throwing out his gloved hand (the left), and took a wonderful back handed catch.”30 The catch “was accounted a very fine thing, even by the Americans themselves.”31 Thorpe, hailed as the “world’s greatest athlete” by an umpire, caught a fly ball and doubled off Tom Daly at first.

The world travelers were already three days behind schedule32 and had to embark for Sydney. “We were sorry we had to leave so quickly,” McGraw lamented, “as a big entertainment had been planned for us.”33

The tour concluded in England at the end of February, and the teams sailed home on the Lusitania, the ship torpedoed by a German U-boat a little over a year later with the loss of 1,198 lives; the disaster was one of the key events leading to the United States’ entering World War I in 1917.

Besides the sources listed in the text, the author consulted the following:

15 A box score in the Washington Evening Star shows the Giants scoring first, which contradicts the Australian account.

32 The crew faced a cyclone in the Pacific, according to reports.