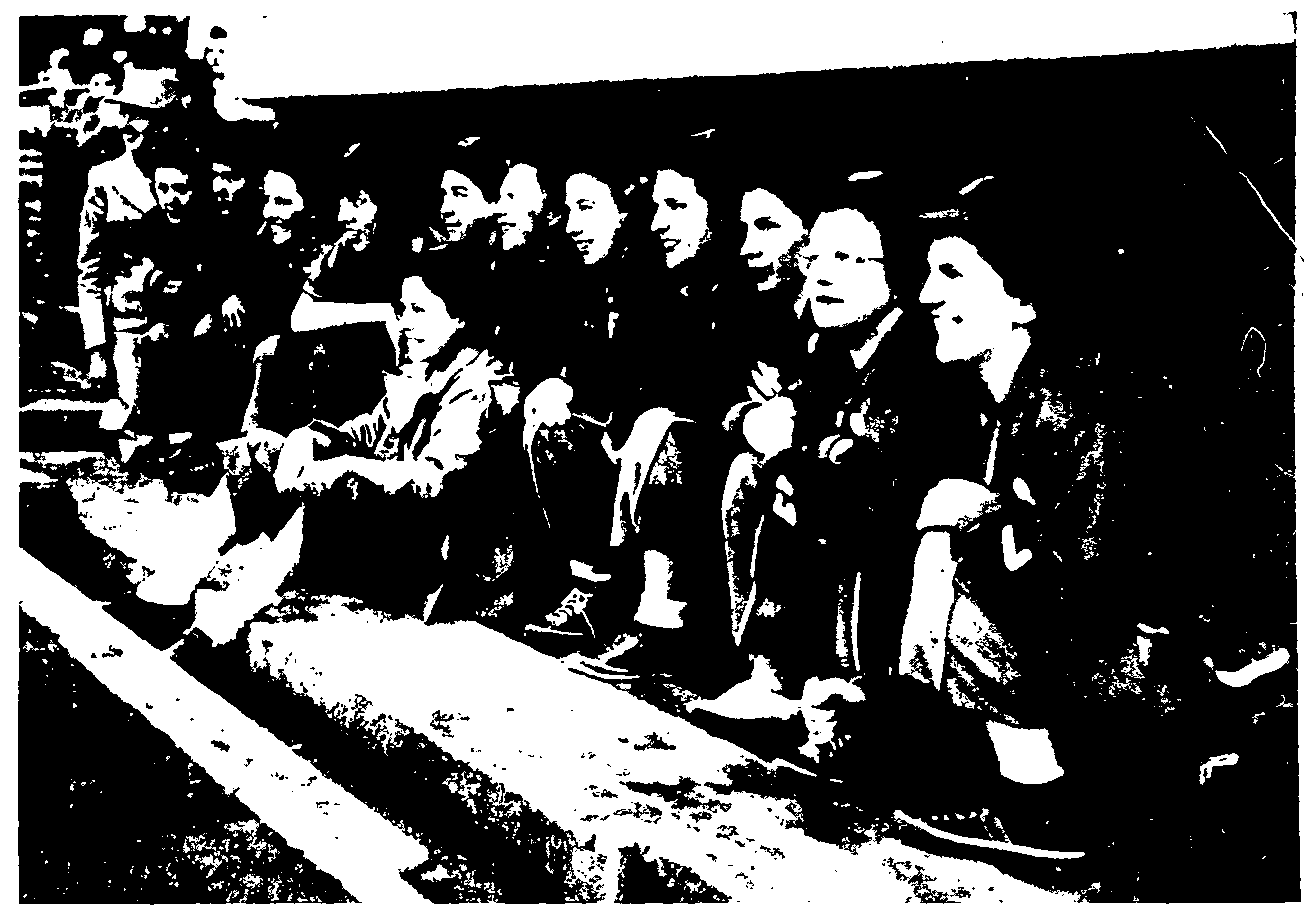 Members of the Kenosha Comets of the All-American Girls Base Ball League pose for a photo on July 1, 1943, at Wrigley Field in Chicago. (Chicago Sun / GenealogyBank.com)

Philip K. Wrigley, chewing-gum magnate and longtime owner of the Chicago Cubs, was an innovator and experimenter, and during World War II, he was committed to supporting the war effort.1 For instance, he assigned all his radio time to selling the war rather than gum — $2 million for two CBS programs alone. He also converted part of his gum-packing factory into an assembly line for packing K rations; and he directed his gum tappers in Central and South America to tap as many rubber trees as they could while working on gum trees.2

Thus, in the late fall of 1942, when the War Department notified major-league baseball owners that the 1943 season might have to be postponed because of increasing manpower needs, Wrigley approved and funded his committee’s recommendation to organize a women’s professional softball league to fill the possible void in major-league parks, to keep baseball alive, and to provide entertainment for war workers and service personnel.3 He reasoned:

“World War One showed to the world for the first time on a large scale what women could and did do, and World War Two is going to carry this even further. American women have taken a very definite share of the load in the country’s progress, and in the fields of science, business and sports they are now also working in ever increasing numbers.”4

Wrigley established the AAGBBL with some experimental policies:

Major-league baseball survived the manpower push of 1943, and as the team owners had done in 1942, they earmarked the proceeds of the 1943 regularly-scheduled June 30 and July 18 games, as well as the July 13 All-Star Game, to go to various war-relief agencies as part of their contribution to the war effort. Most of the proceeds from these games benefited servicemen.7

A league newspaper noted that an intensive WAAC recruiting push was underway to enlist 30,000 new WAACs by July 1, 1943, because each WAAC recruit freed a serviceman for combat duty. The “mammoth” WAAC program at Wrigley Field the night of July 1, 1943, contributed to this effort and included the following:8

Scheduling the WAAC softball game at 6:00 P.M. enabled more working women to attend. Making the event free of charge coincided with the league’s nonprofit status and possibly enabled young women unable to attend otherwise to participate. In addition, the 8:30 P.M. AAGBBL game provided Wrigley with an opportunity to experiment with a night game at his ballpark. Interestingly, Wrigley experimented with the first-ever twilight game at Wrigley Field on June 26, 1943, between the Cubs and Cardinals, and it may have been a test run for the upcoming WAAC rally.10

To help involve AAGBBL fans in the WAAC rally and AAGBBL All-Star Game, sportswriters in the league’s cities advised them that the Chicago league office requested their votes to determine the All-American All-Stars. Sportswriters also advised fans that those who submitted ballots would receive a free ticket to a local game11

A flood of votes, mailed last night [June 29] just before the midnight deadline descended on the Register Republic sports department today and were turned over immediately to league officials who said that they had been making an attempt to summarize the local vote but had been unable to keep up with the flow of ballots.12

In pregame publicity, the Rockford Morning Star introduced the Camp Grant team with a team photo on the sports page and noted their “Nifty Uniforms.” The photo revealed the surprising fact that the Camp Grant team uniforms were identical to the AAGBBL skirted uniforms!13

In South Bend, fans learned that league officials recruited Joe Boland, the public-address announcer for their Blue Sox, to serve as the field announcer for the WAAC rally at Wrigley Field.14

Postgame publicity on July 2, 1943, recorded that 7,000 fans attended the WAAC rally, and that the Fort Sheridan WAACs defeated the Camp Grant team, 11-5.15

The AAGBBL game began with the teams’ usual wartime, pregame routine of lining up in a V-for-Victory formation during the national anthem. The game itself proved to be a one-sided affair with the Wisconsin All-Stars trouncing the Indiana-Illinois All-Stars, 16-0. Apparently, it was one of those nights when one team could do no wrong, and the other team couldn’t do much.16

Three banks of temporary lights were installed on poles situated behind home plate, first base, and third base. One sportswriter judged them suitable for softball.17 Researcher Jay Feldman recorded players’ recollections of playing under those lights:

Shirley Jameson: “The lights weren’t all that great, but we were used to that – we had to play with whatever we had. Besides, just the fact that we were playing in Wrigley Field was enough. We’d have done it whether it was light or dark, because we were all on Cloud Nine.”

Pitcher Helen Nicol noted that the lighting conditions challenged the outfielders: “The shadows would come up and all of a sudden you wouldn’t be able to decipher where the ball was. It was pretty hard for the outfielders to see, especially if the ball got up high.”

Betsy Jochum didn’t realize she was part of a historic event: “I didn’t realize at the time that they didn’t have lights at Wrigley Field. … I just thought those lights were there all the time. We showed up for the game, the lights were on, and we played.”18

“… the brilliant outfielding and baserunning of Shirley Jameson, Kenosha center fielder, thrilled the big crowd throughout the game.19

Eleanor Dapkus hit a triple with the bases loaded to drive in three Wisconsin runs.20

Sophie Kurys got three singles in four trips and drove in two runs besides scoring three herself. Dorothy Wind scored three runs and got one hit in two official turns at bat. Clara Schillace had two hits in three tries.21

Gloria Marks was hit by a line drive and forced to retire after pitching just two-thirds of an inning. Mary Nesbitt pitched the last 2⅓ innings and got in just enough work to sharpen her pitching for tonight.22

Helen Nicol, Kenosha hurler from Calgary, Canada, pitched no-hit ball during her three-inning effort and a teammate, Elise Harney, of Jacksonville, Illinois, was nicked for the first Illinois-Indiana hit when Josephine D’Angelo singled after two out in the seventh inning. The other hit by the losers was pitcher Olive Little’s infield hit to open the ninth.”23

Sportswriters didn’t provide a WAAC box score, but they did provide the AAGBBL’s: 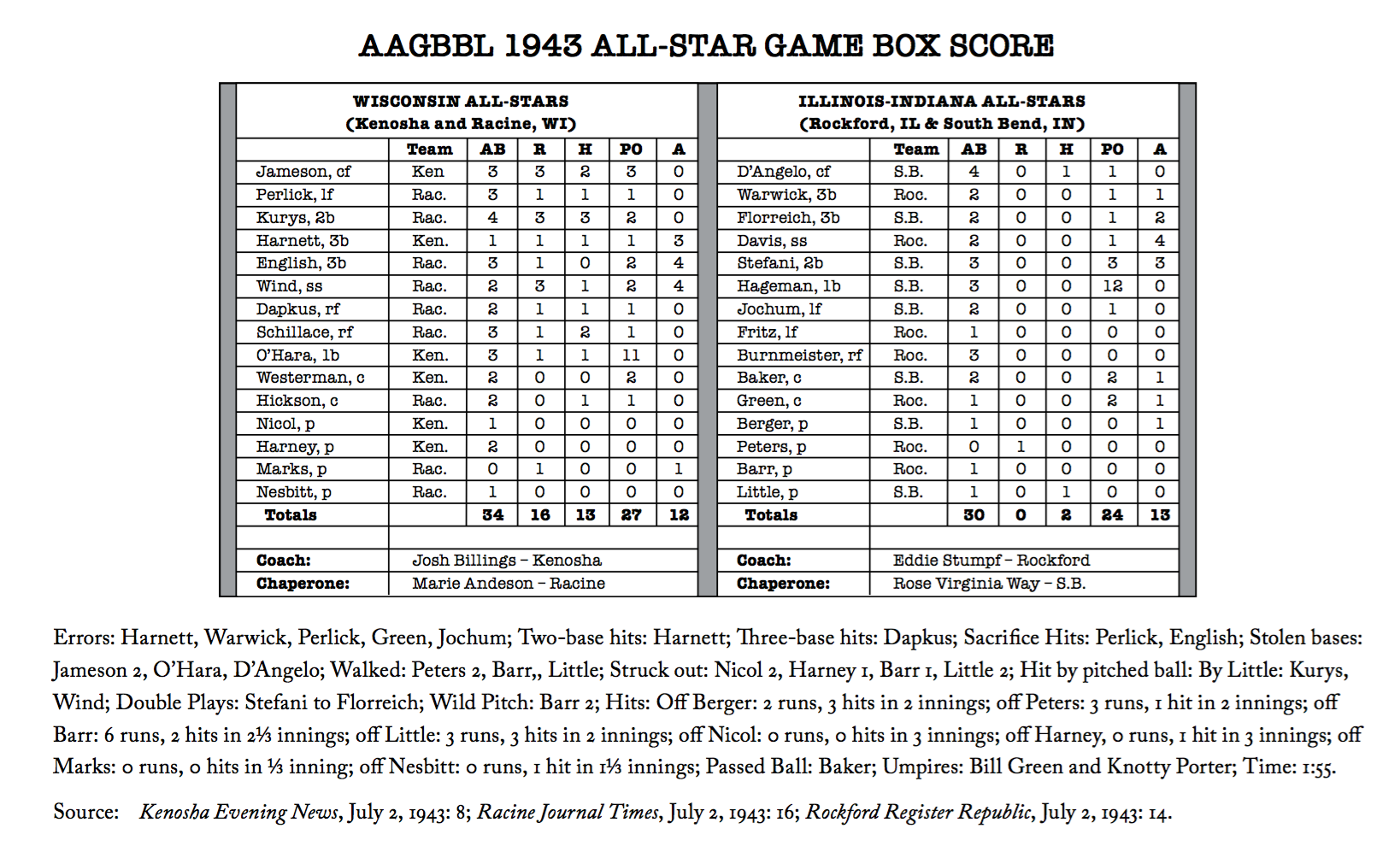 So ended the “mammoth” July 1, 1943, World War II WAAC rally, which incorporated the historic first-ever lighted night game at Wrigley Field. It provided Philip Wrigley an opportunity to benefit women service personnel and to experiment with a night game. The players were thrilled to play in a major-league park and Wrigley Field in particular. At the time, none of Wrigley’s women players imagined they had just made history that would be repeated once more by their league in 1944 and not again until the Cubs played a night game at Wrigley Field in August 1988 — 44 years later.

Note on Sources: The Rockford Morning Star and Boise Idaho Statesman, were accessed through genealogybank.com.