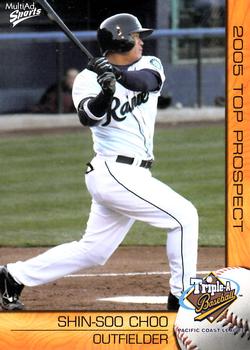 On July 1, 2006, the Tacoma Rainiers hosted the San Jose Grizzlies on a beautiful evening for baseball in the Pacific Northwest. The 7:05 game-time temperature was 82 degrees, with clear skies and a gentle 8-mph breeze blowing in from left field. A sizable contingent of members from the Society for American Baseball Research, who were in the area to attend the organization’s 2006 Annual Convention in Seattle, were among the 5,061 spectators at the game.1

The opposing starting pitchers were two right-handers: Cha-Seung Baek for Tacoma and Matt Kinney for Fresno. Cha-Seung Baek, a native of South Korea, pitched in the big leagues for the Seattle Mariners and the San Diego Padres. He made his major-league debut in 2004 for the Mariners and his last big-league appearance was in 2008 for the Padres. He appeared in 59 major-league games, compiling a cumulative ERA of 4.83 in 279⅔ innings. Matt Kinney made his big-league debut in 2000 for the Minnesota Twins. He also pitched for the Milwaukee Brewers and the Kansas City Royals before concluding his big-league career in 2005 with the San Francisco Giants. Kinney appeared in 103 major-league games, with a 5.29 ERA in 389⅔ innings.

Fresno took a 1-0 lead in the first inning on Todd Linden’s two-out double that was followed by cleanup hitter Mike Cerveniak’s RBI single.

Shin-Soo Choo, Tacoma’s leadoff hitter, started the bottom of the first for the Rainiers with a single. Adam Jones followed with a force out groundball to Fresno shortstop Tim Hutting that eliminated Choo from the basepaths. Third up, Chris Snelling singled, sending Jones to third base. Jones scored the tying run with a steal of home that was almost certainly a successful double steal.2 Mike Morse ended the bottom of the first inning on a ball hit to Fresno center fielder Fred Lewis that stranded Snelling in scoring position.

Both starting pitchers lasted seven innings. After Fresno’s second-inning run, neither team scored against the other starting pitcher. Baek allowed two earned runs on six hits, with no walks and seven strikeouts in his 103-pitch outing. Matt Kinney threw 100 pitches and allowed one earned run on five hits, with one hit batter, four walks, and six strikeouts.

The game was decided ultimately by the effectiveness of each team’s defense and relief pitching. In the top of the eighth inning, Rainiers right-handed reliever Emiliano Fruto retired Fresno in order. In the bottom of the inning, Mike Morse and Jeff Clement reached on singles against Fresno relief pitcher Brandon Villafuerte. Tacoma manager Dave Brundage lifted Morse and Clement for pinch-runners. Hunter Brown advanced both baserunners with a sacrifice. Fresno manager Shane Turner lifted Villafuerte after Brown’s sacrifice and replaced him with Carlos Hines.

Hines walked the first batter he faced, Rob Johnson, loading the bases. When the next hitter, Ismael Castro, grounded out to Fresno second baseman Jed Hansen, pinch-runner Scott Youngbauer scored the tying run and the other runners moved into scoring position.

With the go-ahead run at third and an insurance run at second, Rainiers leadoff hitter Shin-Soo Choo stepped to the plate for what was in retrospect the most important at-bat of the game. Tacoma News-Tribune reporter Todd Milles wrote that Fresno’s Fred Lewis had taken away a few hits from Tacoma hitters during the game by playing a shallow center field. In Choo’s at-bat, Lewis’s shallow positioning cost him when he initially took two steps in on Choo’s hard line drive, which sailed over his head to the base of the center-field wall, 425 feet from home plate.4 Lewis’s shallow positioning, his initial misstep, and the vast distance to the center-field wall at Cheney Stadium provided Choo time to circle the bases for a three-run inside-the-park home run that gave the Rainiers a 5-2 lead.

After Choo’s dash around the bases, the next batter, Adam Jones, singled. Jones stole second and scored on Snelling’s single. The Rainiers then loaded the bases on Greg Dobbs’ single and a walk to Scott Youngbauer. With Hines having thrown 32 pitches while recording only one out, Fresno manager Turner turned to his third relief pitcher of the inning, Jeff Petersen. Petersen retired Jon Nelson on a groundball to second baseman Hansen to end the 11-batter, five-run bottom of the eighth inning.

Fruto retired the Grizzlies in order in the top of the ninth inning to preserve the Rainiers’ 6-2 victory. Fruto was credited with the win for the Rainiers and Villafuerte took the loss for the Grizzlies.

The stars on offense for Tacoma were Choo and Jones. Choo had three hits in four official at-bats, one walk, one run scored, one stolen base, and three RBIs. Jones reached base four times on a single, two walks, and a force out. He scored two runs and stole two bases. Chris Snelling had two hits in three official at-bats, with one walk, one stolen base, one hit by pitch, and one RBI.

The starting pitching for both the Rainiers and Grizzlies was excellent. The Rainiers sealed their victory with quality relief pitching by Fruto that Fresno did not match, Nonetheless, had Fred Lewis played a deeper center field with Choo at bat with two outs and runners in scoring position in the eighth inning, it is certainly possible that the Rainiers and Grizzlies could have been tied at 2-2 going into the ninth inning. However, had Lewis not been playing a shallow center field for much of the game, it is also certainly possible that the Rainiers would have scored more than one run in the game’s first seven innings.

This was a game in which 19 past or future major leaguers participated, either as players or as manager in the case of Shane Turner. Fresno also fielded first baseman Chad Santos and DH Adam Shabala. Fresno finished the season in last place in the Pacific – South Division with a record of 61-82. They were 30 games behind the first-place Tucson Sidewinders. With a 74-70 record, Tacoma finished in second place in the Pacific – North Division, seven games behind the Salt Lake Bees. Neither team qualified for the playoffs, nor did they until 2009 when the Rainiers made it to the semifinals but lost the best-of-five series in four games. In 2010 Tacoma made it all the way and swept the Memphis Redbirds in the Finals.

The author relied on Baseball-Reference.com for information regarding the careers of the two starting pitchers.

The box score of this game is available at

Special thanks to Mike Curto and Tim Rask for providing me with their scorecards for this game. Thanks as well to the Northwest Room at the downtown Tacoma Public Library.

1 Tim Rask’s recollection is that 75 to 100 people attended the game as part of the SABR group. Temperature, wind conditions, and attendance figures are from the box score of the game available online through MiLB. milb.com/milb/stats/stats.jsp?sid=t529&t=g_box&gid=2006_07_01_freaaa_tacaaa_1.

2 Tim Rask and Tacoma Rainiers radio broadcaster Mike Curto graciously provided copies of their scorecards. From both sources it is clear that Snelling stole second base and Jones stole home in the first inning. It is unclear, though, when in the inning the stolen bases occurred. I assume the stolen bases were part of a double steal, with Snelling being the lead runner and Jones stealing home on a return throw by a Fresno middle infielder. Other possible scenarios don’t make much sense. With Snelling on first, Matt Kinney would have been pitching from a stretch, making it highly unlikely Jones would have tried a straight steal of home. If Snelling had stolen second base independent of Jones stealing home, that would have put runners on second and third. A straight steal of home in that situation would have been unlikely because if Jones had been out, it would have substantially lessened or eliminated the likelihood of the Rainiers being able to score Snelling.

3 Information from scorecards of Mike Curto and Tim Rask

4 Todd Milles, “Inside-the-Park Homer by Choo Carries the Day,” Tacoma News-Tribune, July 2, 2006. Milles quoted Choo after the game as saying, “I see the ball, hit it. The center fielder played too shallow. That ball … I hit higher.”