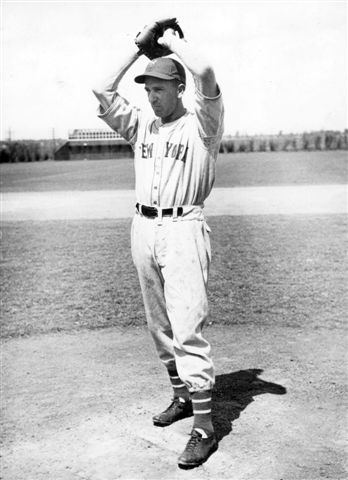 The 1934 All-Star Game is remembered for the performance of New York Giants southpaw Carl Hubbell, who struck out five players in a row who are now in the Hall of Fame. Less remembered is the outstanding outing of Cleveland’s Mel Harder, who entered a mess in the fifth inning and went the rest of the way, allowing the American League to hold on for a 9-7 win.

The follow-up to the inaugural All-Star Game, played the year before at Comiskey Park in Chicago, was a hit again as more than 48,000 fans came to the Polo Grounds in New York to see a wild game.

Hubbell, pitching in the home park of his New York Giants, was following up on a year in which he had led the National League with 23 wins, a 1.66 earned-run average, and 10 shutouts. At the time of the 1934 All-Star Game, he had 12 wins, on his way to 21 for the year (the second of five consecutive seasons in which he topped 20 wins) and another league-leading ERA. In the All-Star Game, Hubbell had a shaky start. He gave up a leadoff single to Charlie Gehringer (who made it to second on when Wally Berger fumbled the ball) and walked Heinie Manush. The American League had two on with no out and an incredible heart of the order coming up. No problem for Hubbell, who relied on his screwball to strike out Babe Ruth, Lou Gehrig, and, after a double steal, Jimmy Foxx.

Hubbell didn’t let up in the second, fanning Al Simmons and Joe Cronin. Bill Dickey singled to break the strike-out streak, but Hubbell finished the inning by striking out Gomez. Years later, the legend became one of Hubbell striking out six Hall of Famers (although, of course, Gomez made the Hall for his pitching, not hitting, ability). At the time, there was no Hall of Fame, but the feat was still noted. The Sporting News wrote, “Carl’s fanning Ruth, Gehrig, Foxx, Simmons, and Cronin in succession amounted to one of the greatest pitching achievements of modern times.1”

Hubbell pitched a scoreless third, as well, but NL manager Bill Terry didn’t have anyone of his caliber to follow. Terry tried Lon Warneke of the Cubs in the fourth, but the Arkansas Hummingbird wasn’t up to Hubbell’s performance. Warneke retired Foxx, the first batter he faced, but then gave up a double to Simmons. Cronin followed with a run-scoring single and, one out later, came home on a pinch-hit triple by Earl Averill to cut the Nationals’ lead in half.

Trouble continued in the fifth, and Warneke gave way to Van Lingle Mungo after walking Ruth and Gehrig, the first two batters in the inning. Foxx greeted Mungo with a single on the first pitch, scoring Ruth and sending Gehrig to third. Simmons beat out an infield hit as Gehrig scored to tie the score 4-4. After Cronin, trying to bunt, popped out, Dickey walked to load the bases. Averill, who had remained in the game after batting for Gomez the previous inning, produced another extra-base hit, doubling to right to score two runs and put the Americans ahead. Red Ruffing, who had pitched a scoreless fourth, drove home two more with a single, giving the American League a six-run inning and an 8-4 lead in the game.

Back on the mound in the bottom of the fifth, Ruffing was roughed up. A leadoff walk to Pepper Martin followed by singles to Frisch, Pie Traynor, and Chuck Klein finished Ruffing. Harder came into a situation with two runs already in, two on, and no out. The Cleveland right-hander allowed another of Ruffing’s runners to score (on a steal of home by Traynor as part of a double steal) but got out of the inning while preserving the American League’s lead, which had been cut to 8-7.

The American League completed the scoring in the sixth with another run on doubles by Simmons and Cronin off Dizzy Dean. The slugfest concluded with a 9-7 win for the Americans, their second straight win in what was becoming a regular summertime event. The Sporting News wrote, “As a result of the widespread interest the game generated throughout the county and the fact that it is a charitable enterprise, devoid of any mark of commercialism, baseball leaders see in it a fine thing for the propagation of the sport nationally and at the December meetings the club owners are expected to go on record to make it a yearly fixture.”2

The All-Star Game did become a yearly fixture although over the years it could no longer be said that the game was “devoid of any mark of commercialism.” Nevertheless, the excitement of seeing the game’s greatest names assembled on one diamond each summer has continued. The 1934 All-Star Game met expectations in terms of interest and entertainment of the game itself. Even though his outstanding outing did not result in his team’s winning the game, Carl Hubbell stamped his name on this one with a performance that lives on in the lore as one of the most memorable All-Star Games ever.

Although the 1934 All-Star Game is remembered for Carl Hubbell’s string of strikeouts, walks were nearly as plentiful in the game. The teams combined for 12 walks, 9 given up by the National League (including 2 by Hubbell). Robert D. Maley, the self-proclaimed sole member of the “Bureau of Unvital Statistics,” tracked the pitches in the game with a breakdown on what happened with every pitch from each pitcher.3 National League hurlers threw 182 pitches, 102 of which were strikes (including balls put into play). Starter Carl Hubbell threw 32 strikes and 21 balls. Warneke threw more balls than strikes (21 to 20). Van Lingle Mungo and Fred Frankhouse were even in balls and strikes (13 each for Mungo and 6 each for Frankhouse). The American League issued only three walks and, as would be expected, had a better overall strike-to-ball breakdown: 96 strikes and 48 balls. Starter Lefty Gomez delivered 28 strikes and 12 balls.

Billy Herman of the National League entered the game twice. Herman hit for Hubbell in the third inning. Later in the game, National League manager Bill Terry needed someone to take over for Frisch. According to The Sporting News, Frisch was troubled by charley horses, and the play-by-play account in Retrosheet notes that Frisch sprained his foot while scoring a run in the fifth. Frisch played another inning in the field. In the seventh, Terry requested that Herman be allowed to re-enter the game to relieve Frisch at second base. American League manager Joe Cronin gave his permission, and Herman went back into the game.

One other All-Star Game was played at the Polo Grounds, in 1942, and was the first All-Star Game to be played at night. According to David Vincent, Lyle Spatz, and David W. Smith in The Midsummer Classic: The Complete History of Baseball’s All-Star Game, the game was originally scheduled for Ebbets Field in Brooklyn.4 However, the game was moved to the Polo Grounds, which had greater capacity, to allow for a bigger crowd since the gate proceeds were going to charities related to the war effort. A crowd of 34,178 attended and saw the American League win 3-1. The Americans did all their scoring in the first, on a lead-off home run by Lou Boudreau and a two-run homer by Rudy York. The game began at 7:21 p.m. (nearly an hour later than scheduled because of rain) and ended at 9:28, two minutes before a blackout test scheduled for New York City.