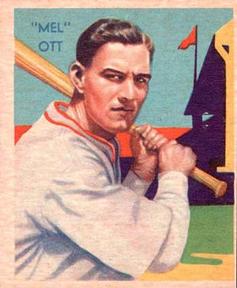 In 1931, Charles “Dutch” Schesler was midway through a professional pitching career that spanned 24 years (1920-1943).1 Though he won 147 games in the minor leagues, his major-league career – 17 games with the 1931 Philadelphia Phillies – was more mirage than oasis. He carried a résumé of a 7.28 ERA and no decisions through his second decade in the minors.

The matchup of starting pitchers in the first game of a doubleheader at Philadelphia’s Baker Bowl on July 11, 1931, is the most intriguing thing about the game between the second-place Giants and sixth-place Phillies. For the Giants, it was 40-year-old Clarence Mitchell, six wins away from the end of an 18-year major-league career for which he will be mainly remembered for hitting the line drive on which Bill Wambsganss turned his unassisted triple play in Game Five of the 1920 World Series.2

The Phillies countered with James “Jumbo” Elliott, a southpaw listed at 235 pounds. The 30-year-old was en route to tying for the National League lead in wins in 1931 with 19 and leading in games pitched (52, including 30 starts). He also led the league in runs allowed and posted a 4.27 ERA pitching in the league’s most wretched bandbox.

Baker Bowl’s right-field wall hovered just 280 feet away, topped by a 40-foot fence and a 20-foot screen. Those might take away home runs, but a solid hitter like Chuck Klein found it difficult to avoid hitting the wall, building his Hall of Fame credentials from 1929 to 1933 with a .424 average, 122 home runs, and 443 RBIs in 373 home games.

Elliott got through the first inning allowing just an unearned run but retired nobody in the top of the second. Four hits and an error later, out came manager Burt Shotton, and in from the bullpen came Dutch Schesler. Two inherited runners scored on outs, and when Schesler took the mound for the third inning, he had a clean slate and a career ERA (in his 12th game) of 5.95, up from 3.55 after three straight pastings by the Cubs.

Schesler found immediate trouble in the third. He hit the leadoff batter, and by the time he got an out, it was 11-0 and counting. The carnage reached 16-0 before the Phillies managed a run off Mitchell in the fourth inning. By then Shotton must have decided that this was the right time to take an extended look at the German-born “Dutch.”

Schesler pitched the rest of the game, facing 48 batters, of whom none walked and only one struck out.3 If that sounds like batting practice, the numbers don’t contradict it. Schesler surrendered 22 hits, including four doubles and four home runs: by Mel Ott, Bill Terry, Freddy Leach, and Sam Leslie. The Giants failed to score in only the fifth inning, tallying 16 runs off a man who must have felt as undressed on the mound as Charlie Brown.

As Stan Baumgartner of the Philadelphia Inquirer put it, “Schesler took everything the Giants had to offer, including the water cooler, but never looked over to his corner in distress and asked Shotton to toss in the towel.”4

A more picturesque description was provided by New York Times reporter John Drebinger: “Behind a prolonged and withering fire of twenty-eight hits which whistled by the ears of two luckless Philly pitchers and blistered the feet of the still more unfortunate Philly fielders, Clarence Mitchell fairly breezed through the opener.”5

Everyone starred for the Giants, with only center fielder Chick Fullis failing to get at least two hits. Even Mitchell, a career .252 hitter, contributed a pair of singles. The gaudiest numbers were compiled by left fielder Freddy Leach: two singles, two doubles, a home run, four runs, and five RBIs. Bill Hunnefield added four hits, and Bill Terry paced the relentless attack by driving in four runs.

The 23-5 pasting, labeled a “frightful drubbing,”6 took a numbing 2 hours and 21 minutes to complete, but the roughly 18,000 fans who witnessed the carnage were understandably skeptical during the nightcap. In the fifth inning of a tie game, they showered the field with pop bottles to protest a strike call made by plate umpire Ernie Quiqley. The natives remained restless as the Giants took a 5-4 lead to the bottom of the ninth inning, when the Phillies rose from the dead to win, 6-5. Chuck Klein’s run-scoring double sent the crowd home with the comfort that the Giants, after bullying Jumbo Elliott and Dutch Schesler in the opener, got their comeuppance and wound up where they started the day.

As for Mr. Schesler, he got into five more games before drawing his release from the Phillies on August 17. Back to the boonies he went for another decade, safe from another Baker Bowl barrage.7

In addition to the sources cited in the Notes, the author consulted retrosheet.org, baseball-reference.com, newspapers.com, and the Charles Schesler clippings file at the A. Bartlett Giamatti Research Center in the Baseball Hall of Fame.

1 Retrosheet and a death certificate say “Schussler,” but that spelling is outvoted, 3-2, by obituaries, contemporary newspapers, and baseball-reference.com.

2 As trivia buffs know, in Mitchell’s other at-bat in Game Five, he hit into a double play.

3 Johnny Vergez somehow whiffed in the fifth inning. In the third inning, he was the leadoff hitter plunked by Schesler, later capping the seven-run rally with an RBI single.

7 He pitched in the New York-Pennsylvania League in 11 of his 19 seasons in the minors.