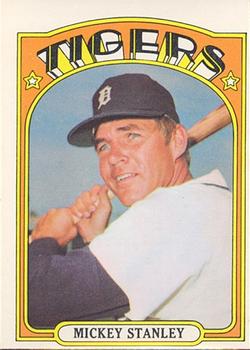 When the hot and humid morning of Tuesday, July 11, 1972, dawned in Detroit, the Tigers found themselves hanging onto a slim one-game division lead over the reigning World Series champion Baltimore Orioles, who were in the midst of a five-game losing streak that had coughed up their hold on first place just a couple days before. The Tigers hadn’t been so hot themselves, authoring a middling 10-11 record during the prior three weeks leading up to this tilt, but nevertheless had still backed into the top of a weak American League East.

At first blush, the luck of the schedule seemed to be on the Tigers’ side at this particular moment, as they found themselves hosting the Texas Rangers, recently relocated from Washington and helmed by living legend Ted Williams. Perhaps the franchise was no longer first in war and first in peace, but it did find itself last in the American League West. However, the Rangers had just swept four from the Orioles in Baltimore over the weekend, which had left Teddy Ballgame nonplussed: “Imagine, the lowest-rated team in the league beating the champs four straight. It just shows you what can happen in this game.”1

Nevertheless, the Tigers crushed the Rangers 8-3 in the series opener Monday on the strength of two Norm Cash home runs, and now they were coming back for another shot at a weak team to maintain their slim margin over the Orioles.

Tom Timmermann, in his fourth season with the Tigers, took the start. This was his first season as a regular starter and he was doing well so far, coming into the game 6-7 with an earned-run average of 2.51, solid even for the hitting-starved 1972 American League. He went up against Pete Broberg, the 22-year-old second-year pitcher toting a 5-7 record backed with a bloated 3.92 ERA. It looked as though the advantage was to the Tigers to start with.

At least until the first batter of the game. Rangers leadoff hitter Dave Nelson, “who could hardly get his bat on the ball in pregame practice, dropped a home run into the right field-corner seats to begin the game.”2 Toby Harrah followed with a single off Tigers third baseman Aurelio Rodriguez’s glove; Don Mincher took first on a bunt that Rodriguez fumbled for an error; and Dick Billings dribbled a single to first base to load the bases.

Harrah scored on Hal King’s fielder’s choice, forcing Billings out at second, after which Larry Biitner singled sharply to center, plating Mincher and giving the Rangers a 3-0 lead that brought an early end to Timmermann’s night. Lefty Fred Scherman relieved him and immediately walked Joe Lovitto before inducing Lenny Randle to end the inning by grounding into a 1-2-3 double play.

The Tigers answered with a single run in the bottom of the frame on a sharp single to right by Bill Freehan, but the Rangers pushed the margin back to three in the second inning on Mincher’s single to score Nelson. The Tigers knotted the game with two runs in the second on back-to-back RBI singles by Rodriguez and Jim Northrup, and one in the third on Willie Horton’s fielder’s choice. Northrup doubled home Dick McAuliffe in the fourth to give the home team a 5-4 lead after four, and it looked as though a barnburner would make for a hot time in the old town that night.

The teams exchanged goose eggs in the fifth before the Rangers scored another run in the top of the sixth. Lovitto singled to lead off the inning and Randle followed with another, advancing to second as Lovitto was thrown out trying to make third base. Scherman was done by this point, having thrown, according to Tigers manager Billy Martin, 80 pitches in the game, following an 80-pitch effort just two days before. Questioned about this decision after the game, Martin became annoyed, stating “[Scherman] was out of gas. We count all the pitches, it isn’t guesswork.”3

Chuck Seelbach replaced Scherman, and he induced a foul popout to the catcher by Ted Ford. The pesky Nelson struck gold yet again with a single, scoring Randle to tie the contest once again, at 5-5. It was the third Rangers run of the night that Nelson had factored into, and he would be due up to the plate at least once more.

The lead lasted just a scant few minutes as Mickey Stanley, the reigning three-time Gold Glove center fielder not generally known for the potency of his bat, led off the bottom of the sixth inning with a line-drive home run into the left-field seats off left-hander Paul Lindblad, giving the Tigers a 6-5 lead.

The game proceeded quietly from that point to the top of the ninth, which was led off by the Tigers’ nemesis of the night, Dave Nelson. He tried for a bunt single and was barely nipped at first for the out. Ted Williams came out to vehemently protest the decision to first-base umpire Dave Phillips, who upheld the call. Harrah lined sharply to Rodriguez at third. Mincher became the tying run by lacing a single into center field, but Billings followed with a flyout to left to end the game.

Afterward, Williams admitted that his offense bore some culpability for the team’s defeat. “That was a bad one to lose. … How many guys did we leave on base? Thirteen?”4 (The total was actually eight.) Still, Williams was livid about the call at first made by umpire Phillips in the ninth. “That call was the difference in the game,” he complained. “With Nelson on first the infield would have played back. Harrah’s ball would have been a double down the third-base line to tie the game and Mincher’s hit would have won the game.”5

Across the diamond, the Tigers’ clubhouse was elated in victory, none more than hitting hero Stanley. His game-winning home run was his ninth four-bagger of the season, already more than his total of seven the previous year, as well as his third in four games. The then-.229 hitter was honest about his meager talent at the plate: “I’m a mistake hitter. I can’t hit good pitching. If the pitchers don’t make mistakes, I’m in trouble. As a matter of fact, these three home runs I’ve hit in the last three days have all been mistakes.”6 It was even more fortunate for the Tigers that lefty Lindblad had been on the mound for the Rangers when Stanley strode to the plate in that sixth inning, given Stanley’s extreme platoon advantage against left-handers (129 tOPS+) versus right-handers (85 tOPS+).7

This game, essentially decided by a close call at first base in the ninth inning, also turned out to be the literal difference-maker for the Tigers’ playoff hopes that 1972 season, which had been delayed by a players strike that shaved several games off the beginning of the schedule. Thus, the season commenced on April 158 instead of the originally scheduled April 6.9 Rather than rework the schedule so that all teams would play the same number of games, owners and player representatives agreed to start the season on the 15th without rescheduling any of the missed games. This led to an unequal number of games played by teams.10

As a result, the Tigers played 156 games and finished 86-70, while the second-place Boston Red Sox played 155 and finished 85-70, giving the Tigers the division crown by a half-game and a date to play the Oakland A’s in the American League Championship Series. Had umpire Phillips instead ruled Nelson safe at first base rather than out, the Tigers might have lost that July 11 game and finished in second place with an 85-71 record, a half-game behind the Red Sox instead, who then would have advanced to the ALCS rather than the Tigers.

For their part, the Rangers went on to crash their way to a 54-100 record, finishing 20½ games out of fifth place and 38½ behind the first-place A’s.