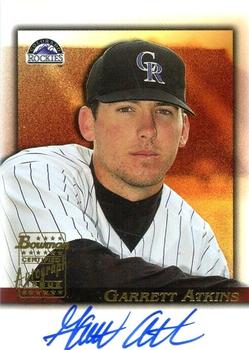 Saturday dawned warm and uncharacteristically humid in the Pacific Coast League’s “most notorious bandbox ballpark,”1 where the homestanding Colorado Springs Sky Sox stayed hot with a 4-3 win over the Salt Lake Stingers.

Things looked good early for Salt Lake, as the Anaheim Angels’ Triple-A affiliate scored two runs in the top of the first inning on a single by Julio Ramirez and doubles by designated hitter Adams Riggs and Barry Wesson off left-handed Sky Sox starting pitcher Chris Michalak. But the Colorado Rockies’ top affiliate responded quickly, knotting the score in the bottom of the inning when Clint Barmes singled and scored on Armando Romero‘s double. Romero then scored on an error to tie the score, 2-2. The Sky Sox added a run in the second to take a 3-2 lead.

Michalak settled down after the first inning and coasted through four scoreless frames before issuing a pair of one-out walks in the sixth. This prompted manager Rick Sofield to replace him with 35-year-old righty Matt Whiteside, who was making his first appearance of the season for the Sky Sox. The former Texas Rangers hurler induced an inning-ending double play off the bat of Keith Johnson to end the threat.

Matt Hensley (8-12 with a 4.89 ERA so far in the season) pitched seven strong innings for the Stingers and departed with the game tied at 3-3.2 His replacement, Rich Rodriguez, surrendered a 423-foot solo home run to PCL All-Star Garrett Atkins on the first pitch of the home half of the eighth inning, putting the Sox ahead 4-3.3

Sofield called on Sky Sox closer Brad Clontz for the ninth inning. Salt Lake’s Wil Nieves reached first on an error to lead off the inning, and after Adonis Harrison struck out, he scrambled to third base on a bad-hop single from Amezaga, the Stingers’ leadoff hitter. That brought Ramirez to the plate. The 1999 Florida Marlins minor-league player of the year4 tapped a comebacker to Clontz, who turned it into a game-ending double play.

“That’s why he’s an All-Star,” Sofield said of Clontz in the Colorado Springs Gazette. “He has ice cubes in his veins.

“We didn’t have a closer coming out of spring training. He earned it, and he hasn’t given it back.”5

It was the 21st save of the year for Clontz, a member of two Atlanta Braves World Series teams in the 1990s.6 Four days later, he pitched for the PCL All-Stars in the Triple-A All-Star Game.7

Attendees of the 33rd SABR Convention, held in Denver, were among the 5,558 who attended this Sky Sox game.8

The Sky Sox eventually swept the four-game series against Salt Lake, then headed into the Triple-A All-Star break. Colorado Springs ended the 2003 season with a record of 73 wins and 70 losses, in second place in the league’s Central Division.9

The Stingers finished their 2003 campaign in third place with a 68-75 record in the Northern Division under manager Mike Brumley, the son of former big-league catcher Mike Brumley Sr. The junior Brumley was a playing star at the University of Texas and also was a bronze-medal-winning member of Team USA in the 1982 Amateur World Series. He eventually played eight seasons as a journeyman big leaguer.

Sky Sox hitting coach Allan Cockrell was suspended two games by the Pacific Coast League for an incident involving an umpire during Thursday’s series opener against Salt Lake. He was back in uniform on Sunday, July 13, when he managed the team in place of Sofield, who served a one-game suspension for an incident that occurred July 4 against the Omaha Royals. Frustrated on Independence Day, the New Jersey native ignited his own in-game fireworks that crescendoed with him launching a water cooler onto the field at Rosenblatt Stadium.10