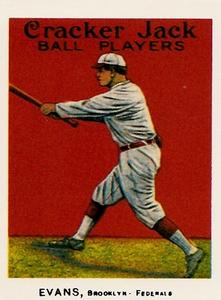 On a muggy July day with intermittent showers looming in the forecast, the fifth-place Brooklyn Tip-Tops took the field against the cellar-dwelling Pittsburgh Rebels at Washington Park. This was the last game of a nearly two-week-long homestand for the Tip-Tops. Brooklyn, like many Federal League teams, had been having trouble drawing fans but fortunately for the club’s ownership, attendance had picked up in recent days.

Joe “Happy” Finneran was the starting pitcher for Brooklyn while Walt “Hickory” Dickson took the mound for Pittsburgh. Finneran earned his sarcastic nickname for his unpleasant disposition. He had previously seen action in parts of two major-league seasons with the Philadelphia Phillies. Starting the 1914 campaign with the Federal League Baltimore Terrapins, Finneran was traded to the Tip-Tops for outfielder Felix Chouinard in early June.

Hickory Dickson broke into the big leagues with John McGraw‘s New York Giants in 1910. Possibly called Hickory because of his rural upbringing, Dickson pitched for the National League Boston Braves in 1912 and 1913. In December of 1913 the Braves optioned Dickson to the International League Rochester Red Wings. A short time later he jumped his Rochester contract and signed with the Pittsburgh Rebels in the newly formed Federal League.

During the pregame workout on July 13, Dickson told Tip-Tops business manager Monte Ward that he was feeling sick, presumably from food he had eaten the night before at Coney Island. The two men had previously known each other when Ward was the president/part-owner of the Boston Braves. Dickson, although under the weather, informed Pittsburgh player-manager Rebel Oakes that he was able to make the start against Brooklyn.

Finneran began the contest by retiring the first two men he faced before Oakes reached base via a single. With Ed Lennox at the plate, Oakes attempted to steal but catcher Yip Owens  gunned him out at second base to end the inning.

For the next few frames Finneran and Dickson were unhittable. Dickson, employing his elusive breaking ball to great effect, retired the Tip-Tops on four pitches in the third inning. The showers that afternoon played right into Finneran’s hands, who was known for rubbing mud on the ball on this type of day to create movement on his pitches.

With two down in the top of the fourth Oakes stroked another base hit off Finneran. This time he successfully stole second but by all appearances it looked as though he was out. The potential threat ended when Lennox went out on an easy fly ball.

In the Pittsburgh half of the fifth, Tex McDonald pulled a double down the right-field line. Hugh Bradley then laid down a perfect bunt that pushed McDonald to third. Ed Holly smoked a hot grounder to Tex Wisterzil, who was manning the hot corner. The surehanded third sacker scooped up the ball and fired home in time to catch McDonald at the plate. Then catcher Claude Berry popped up to the first baseman to end the inning.

With one away in the bottom of the fifth, Wisterzil reached base on a throwing error by shortstop Holly. While navigating the bag, Wisterzil spiked first baseman Hugh Bradley so severely that he had to leave the game. The next man, Al Holt, executed a perfect hit and run, singling to left while Wisterzil scampered to third base. Yip Owens followed with a hot grounder to Ed Lennox at third. Wisterzil was caught leaning too far off the bag and in trying for home he was put out easily. The rally ended when Joe Finneran lofted a Texas Leaguer that was hauled in by center fielder Rebel Oakes behind second base after a long run.

Both teams had a man on base in the sixth but Finneran and Dickson were able to work out of trouble. In the seventh and eighth, each team was retired in order. In the top of the ninth Rebels shortstop Jimmie Savage managed a walk off Finneran but went no farther.

The Tip-Tops threatened in their half of the frame when outfielder Steve Evans stroked an opposite-field line drive that had gap written all over it. Rebels left fielder Davy Jones, getting a good jump, raced over and flagged the ball down, denying Evans of a sure extra-base hit.

Lennox started the 10th for Pittsburgh with a hard shot past the bag at third. Claude Cooper in left pounced on the ball quickly, holding Lennox to one base. Finneran, remaining unfazed, retired the next three batters. Brooklyn went down in order in the bottom of the inning, as did the Rebels in the top of the 11th. In the Tip-Tops’ half of the 11th, Finneran connected for his third hit of the season but his teammates left him stranded. Back on the hill in the top of the 12th, Finneran continued to hold the Rebels at bay, setting Pittsburgh down in order.

With the game approaching the two-hour mark Steve Evans stepped into the batter’s box for Brooklyn with one out in the home 12th. Evans had started his big-league career with the New York Giants in 1908. The following season the St. Louis Cardinals acquired his contract. Evans was known for his carefree attitude along with his proclivity for being hit by pitches, leading the National League in that category from 1910 to 1912.

During his time with Cardinals Evans had proved himself a steady but never spectacular ballplayer. After returning from a worldwide tour with the Chicago White Sox and New York Giants in the spring of 1914, he jumped to the Tip-Tops. Finding his stroke early, Evans hit over .400 in his first 20 games with his new team. By July he had established himself as one of the premier hitters in the fledgling circuit.

With Evans brandishing his trademark black bat at the plate, Hickory Dickson flipped one of his famous curves up to the southpaw swatsmith. With a mighty cut Evans made solid contact with the spinning horsehide. As the home crowd rose out of their seats, a local paper described what happened next: “The ball shot for the fence in a long climbing fly. Rebel Oakes raced for the fence but stopped at the base of the barrier while the ball sailed blithely over and fell in that exclusive residential section adjoining the north end of the grounds. A lively scramble ensued among the boys outside for possession of the ball, which will end its days on the sandlots of Flatbush.”1

The first man to greet Evans as he crossed the plate with the game-winning run was Finneran. Grabbing the slugger by the neck the elated hurler exclaimed, “Thanks Steve, you sure did bust it one.”2

Evans’ late-inning heroics ensured Finneran, who struck out two while allowing five hits and one walk, of his fifth straight victory. The 23-year-old tosser would post a 12-11 record for a Tip-Tops team that finished the inaugural Federal League season in fifth place.

Dickson deserved a better fate, also giving up just five hits, but the one run. He would go 9-19 for the Rebels, who ended up second from the bottom in the eight-team loop.

In addition to the source cited in the Notes, the author also consulted Baseball reference.org, Chronicling America, LA 84 Foundation, and Brooklyn Daily Eagle, Sporting Life, and The Sporting News.