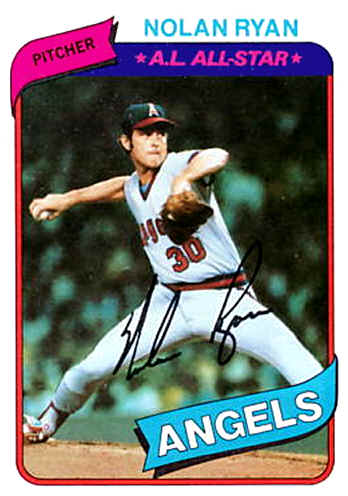 Before a nearly sold-out Anaheim Stadium crowd of 41,805, and with a national television audience tuned in, Nolan Ryan took the mound for the California Angels with four no-hitters under his belt. He shared the record with Sandy Koufax. Might the Ryan Express break the record against the visiting Yankees, the defending world champions?

The game was the first of a three-game series leading up to the All-Star break. The Angels entered the game leading the Texas Rangers by a game in the American League West while the Yankees were in fourth in the AL East, trailing the Baltimore Orioles by nine games.

The Yankees started veteran Luis Tiant (6-3) against Ryan (11-6).The possibility of an historic fifth no-hitter had the Anaheim faithful buzzing well before the first pitch — a playoff atmosphere in mid-July. The game had had an early start, five-fifteen, to accommodate ABC Sports and a nationwide audience. Pitching at that hour, Ryan would enjoy an advantage. During batting practice, Yankee catcher Thurman Munson sent a message to Ryan through Angel pitcher Jim Barr: “You can tell Nolan that it won’t matter what the light’s like at five o’clock. I can’t hit him at eight o’clock, either.”1

The pitchers locked up in a duel for the first two innings, each striking out two with only one hit given up between them, a lead-off single by catcher Brian Downing in the Angels’ half of the second. Ryan was coming off a six-hit shutout against Boston in his last start, but the sight of the world champions, in their pinstripes, gave him extra incentive.

Ryan looked merely mortal in the top of the third when Yankees’ second baseman, Willie Randolph, reached first on Ryan’s second walk of the night, and then scampered to second on a wild pick-off attempt by the right-hander, the first of three Angel errors on the night, but by no means the most noteworthy. No harm ensued as Ryan struck out Bucky Dent and Bobby Murcer to end the inning.

In the Angels’ half of the third, four consecutive two-out singles by the heart of the order, Dan Ford, Don Baylor, Willie Aikens, and Brian Downing, resulted in two runs. That would be all Ryan needed, although Tiant, pitching 7 2/3 innings on pure grit alone, yielded four more.

The Angels led 3-0 when the Yankees came to bat in the top of the eighth. Ryan was five outs away from claiming the no-hit record for himself when the Yankees’ designated hitter, Jim Spencer, lashed a sinking line drive toward California center fielder Rick Miller. Depending on varying accounts, the ball either short-hopped or glanced off the tip of his glove, allowing Spencer to reach second base.

The official scorer, Dick Miller, ruled it an error, but the Yankees vehemently disagreed.

“While the Yankees’ media en masse, besieged Miller, and the Yankee players showed their disdain from their dugout, ABC announcer [Keith] Jackson was on the air disagreeing with the official scorer. Spencer even issued an Italian salute.”2

Ryan wasn’t too sure himself. “It was a tough play. Rick was a good fielder, but it was his first game back from the disabled list. He had a hand problem. Whether that affected his handling of the ball or not I don’t know,” he wrote. 3 Ryan went back to work, some of his concentration broken. “I didn’t want a tainted no-hitter,” he wrote later.4

Spencer was stranded at second as Ryan worked out of the jam with the no-hitter still intact, although he had added another runner with a walk to Bucky Dent. The Angels tacked on three more runs in the home half of the eighth, two of them on a Dan Ford triple that chased Tiant.

Questionable calls or not, with the Ryan Express on the mound for the ninth, the game was well in hand, but no one was leaving their seat. Munson led off the inning by reaching first on shortstop Jim Anderson’s error. Another questionable call, according to Spencer. “Munson’s could have easily been a base hit.” 5

After Graig Nettles popped out, Reggie Jackson laced the first pitch he saw up the middle—a clean single that sent Munson to third. The no-hitter was gone. Jackson went up the line at first base and waved sarcastically to the press box. But once on first base, he tipped his hat to Ryan, and Ryan, in turn, tipped his to the fans in response to their standing ovation. “That moment moved me. I realized I had lost the no-hitter, but also realized that it probably worked out for the best. I wouldn’t have wanted to throw a no-hitter and have it constantly argued that it was a no-hitter only because of the official scorer,” Ryan remembered.6

When Lou Piniella drove Munson home with a sacrifice fly, the New Yorkers’ faithful took heart that their team had avoided a shutout as well as a no-hitter, albeit on an unearned run. Still, after 142 pitches, padded by five walks and nine strikeouts, Ryan had finished his work with perhaps the most difficult, and easily most controversial, of his one-hitters to date.

After the game, a visibly upset Spencer assessed Ryan’s gem to have been a three-hitter. He alluded to his drive in the eighth, Munson’s short-hopper, and Jackson’s legitimate hit in the ninth.

Even Angels’ general manager Buzzie Bavasi chimed in on the official scorer’s ruling in the eighth inning, “You’ve embarrassed us with that home-town call. That was a hit all the way.”7 But his anger toward the scorer may have been more of a venting over the fact that now he owed Ryan a $25,000 bonus for the one-hitter.

Ryan might have been pondering, in the aftermath, the words of Cy Young, “A pitcher’s got to be good and he’s got to be lucky to get a no-hit game.”8 Whether luck was involved, and despite the fact that it was Friday the 13th, Ryan was matter-of-fact: “I guess it just wasn’t meant to be a no-hitter. I really didn’t have no-hit stuff tonight. It was good stuff, but nothing special.”9

In his 1988 memoir with sportswriter Harvey Frommer, Ryan assessed the game simply. “I wound up with the seventh one-hitter of my career to that point. It was a tough game, an exciting game, and a game that, I guess, Reggie Jackson and Rick Miller and Dick Miller and I will never forget.”10

Ryan went on to pitch three more no-hitters in his Hall of Fame career. The Yankees were not victimized by a no-hitter until June 11, 2003, when six Houston Astros pitchers teamed to up to do so in Yankee Stadium.

I attended this game, the only opportunity I ever had to watch Nolan Ryan pitch live. I’m an avid fan of the Yankees, but admit that for one Friday the 13th I became one of those cheering for the Ryan Express. It’s not very often that one has a chance to witness such a potentially significant historical event.

In addition to the material listed in the Notes, I used Baseball-Reference.com and Retrosheet.org as sources.