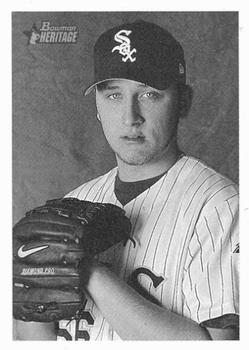 A sunny Friday afternoon in July is a perfect day for a baseball game. When the venue is Chicago’s Wrigley Field and the opposing teams are the crosstown rivals Chicago Cubs and Chicago White Sox, the setting is all the more idyllic. Throw in a pitching matchup of two young stars and it’s easy to see why the venerable ballpark on Chicago’s North Side was packed with a standing-room crowd of 40,157 for the game on July 13, 2001.

The Cubs had visited Comiskey Park II earlier in the 2001 season, where the White Sox had taken two out of three games in a June series. Then they began a three-game set on July 12, immediately after the All-Star break. Shortstop Ricky Gutierrez hit an eighth-inning grand slam to power the Cubs to victory in the series opener, 5-1. With that win, the Cubs tied the White Sox at 11 wins each in the fifth season of official interleague play.

Entering the July 13 matchup, the Cubs were in first place in the National League Central Division, four games ahead of the Houston Astros. The White Sox were four games below .500 at 41-45, 14 games behind the AL Central-leading Minnesota Twins.

The game would be a contest between two young starters. Mark Buehrle, 22, of the White Sox was making his first start in Wrigley Field. The left-hander entered the game with a record of 6-4 and a 3.29 ERA. The Cubs countered with their 24-year-old fireballing right-hander, Kerry Wood. The 1998 Rookie of the Year was 8-5 with a 3.61 ERA, although he sported a record of 7-1 in his previous 10 starts.

Ray Durham led off the game by grounding out to second base. Wood then walked José Valentin. After Carlos Lee flied out to right, Valentin stole second, but he was stranded when Magglio Ordonez grounded out to shortstop.

The bottom of the first got off to a promising start for the Cubs, as leadoff man Eric Young singled to center and Ricky Gutierrez followed with a single to right, which put runners on the corners for the North Siders’ All-Star right fielder, Sammy Sosa. But Sosa struck out swinging on a full count, and White Sox catcher Mark Johnson threw out Gutierrez trying to steal to turn a double play. Ron Coomer followed with another strikeout to leave Young stranded on third.

The Cubs threatened again in the third. After catcher Robert Machado flied out to start the inning, Wood singled to right. Young sacrificed him to second and reached on a throwing error by White Sox third baseman Jeff Liefer. Once again Buehrle wriggled out of the jam when Gutierrez grounded into a 6-4-3 double play.

In the top of the fourth, the first two White Sox batters reached base as Wood walked Valentin, then hit Carlos Lee with a pitch. It appeared the South Siders also would fail to capitalize on a prime scoring opportunity when Ordonez sent a grounder to Cubs shortstop Gutierrez, who started a double play as Valentin went to third. With two outs, Liefer punched a line drive to short left field to score Valentin, and Liefer advanced to second on a throwing error by Cubs left fielder Rondell White. Wood plunked Paul Konerko to put runners on first and second for Chris Singleton, who drove Liefer home with another single to left field. After the play, Rondell White, who had just come off the disabled list the day before, removed himself from the game to avoid aggravating his hamstring and was replaced by Delino DeShields. Woods walked Mark Johnson intentionally to load the bases, then whiffed Buehrle to prevent any further damage, but the White Sox had a 2-0 lead.

The Cubs seemed poised to respond in the bottom of the inning as Sosa led off with a double and Coomer followed with a single to put runners on the corners with nobody out. Buehrle maintained his composure, however, and struck out the newly inserted DeShields looking, then coaxed Matt Stairs into an inning-ending double play.

The South Siders added another run in the fifth without a hit. The erratic Wood walked Durham and Valentin to start the frame, and both runners moved up when the Cubs right-hander uncorked a wild pitch on his first offering to Carlos Lee. Lee struck out, but Ordonez followed by stroking a fly to left-center that was caught by center fielder Gary Matthews Jr. deep enough to score Durham. Wood again struck out the final batter of the inning to minimize the damage, but the White Sox held a 3-0 lead with their starting pitcher looking strong.

In the bottom of the sixth, the Cubs got their leadoff man aboard for the third time in the game when Gutierrez singled. Sosa then hit an 0-and-1 pitch over the fence to cut the lead to 3-2 and inject some life into the Wrigley Field faithful. With that home run, Sosa became the first Cubs player with eight 30-home run seasons.2 Buehrle buckled down to retire the next three batters and left the White Sox with a one-run lead heading into the seventh.

The White Sox delivered a decisive blow in the top of the seventh by feasting on the Cubs bullpen. Wood departed the game after the sixth, having struck out eight batters but also having walked seven and hit two. Valentin greeted lefty reliever Will Ohman with a fly ball into the left-field bleachers. On his way back to the dugout, the White Sox shortstop “tapped his heart and blew kisses,”3 which local scribes interpreted as a dig at Sosa’s home-run rituals. Valentin denied any intent to slight Sosa, saying, “I have my family here, and every time I hit a home run I blow a kiss to my mom and my wife. I was just pointing to them to let them know I’m thinking of them. I don’t mean to show up anybody.”4

Perhaps rattled by Valentin’s blast, Ohman walked Lee and Ordonez, giving the White Sox another golden scoring opportunity. But the Cubs seemed to catch a break a break when Liefer popped out to the catcher on an attempted bunt. Todd Van Poppel came in to face Paul Konerko. The White Sox first baseman promptly launched a 1-and-0 fastball over the left-field bleachers and onto Waveland Avenue for a three-run homer. Van Poppel managed to record the final two outs and go on to close the game, but the White Sox’ four-run outburst had given them a 7-2 lead.

Buehrle retired the Cubs in order in the bottom of the seventh and allowed only a leadoff double to Young in the eighth before yielding to Keith Foulke in the ninth. The White Sox closer pitched a perfect inning to preserve the win for the White Sox.

White Sox manager Jerry Manuel lauded Buehrle’s effort. “We needed a solid outing from him and he has really been something special all year,” the skipper said. “When we needed a strikeout, he got the strikeout. When we needed a groundball for a double play, he got the groundball for a double play.”5 When asked about his first experience at Wrigley Field, Buehrle merely remarked, “It’s neat to pitch here.”6

The White Sox starter finished the year 16-8 with a 3.29 ERA, cementing himself as the team’s ace. Buehrle went on to have a 16-year major-league career, winning over 200 games and throwing two no-hitters, including a perfect game in 2009.

The White Sox took the series finale on Saturday, 3-1, to take the season series over the Cubs and give the South Siders bragging rights in the city of Chicago.

Neither the Cubs nor the White Sox advanced to the playoffs in 2001, although it could be said that the White Sox had a better end to their season. After the All-Star break, the South Siders went 42-35 to end the season above the .500 mark at 83-79, eight games behind the division-winning Cleveland Indians and only two behind the second-place Twins.

The Cubs, meanwhile, fizzled in the second half of the season, going only 37-39 the rest of the way, tumbling out of first place for good in late August, and finished 88-74, which dropped them to third place in the NL Central Division.