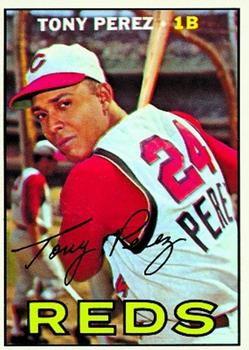 It was the stuff of boyhood dreams. With two outs in the bottom of the 10th inning and the bases loaded, 25-year-old Tony Perez stepped into the right-handed batter’s box against veteran hurler Jack Fisher with a chance to send the 15,006 Cincinnati fans home happy. Perez had just won the All-Star Game for the National League in dramatic fashion three days earlier with a 15th-inning home run off the Oakland Athletics’ Catfish Hunter. Could he again don the hero’s mantle?

The July 14, 1967, Crosley Field matchup between the New York Mets and the Cincinnati Reds pitted two teams at different stages of development. The Mets had concluded the 1966 season in ninth place in the National League, the highest finish in their five-year history, and were struggling along at 32-48 coming into the game. The Reds, on the other hand, had experienced success in the 1961-65 period; they averaged about 91 wins a season and won the pennant in 1961. They were showing signs of recapturing that magic after a disappointing 76-84 season in 1966, and came into the game sporting a 47-40 record. The Reds were the slightly older team, but both teams featured several young players providing hope for better things. Bud Harrelson was in his first full season as the Mets’ starting shortstop, and 22-year-old Tom Seaver was the anchor of the pitching staff. The Reds countered with 1963 National League Rookie of the Year Pete Rose, first baseman Lee May, and Perez.

Taking the mound for the Mets was veteran Jack Fisher, who had a 6-9 record and a 4.44 ERA coming into the game. Fisher, on his third team in his ninth major-league season, had not had a winning record since 1960 and had lost 24 games in 1965.

His opposite number was 19-year-old phenom Gary Nolan. Selected by Cincinnati in the first round of the 1966 amateur draft, Nolan was in his first season at the big league level and was faring well for himself. In fact, he had been lavished with superlatives throughout the season. After Nolan fanned 12 Los Angeles Dodgers on April 20, the Dodgers’ Jim Lefebvre said, “He can have my vote right now”1 when asked about Nolan’s chance to win Rookie of the Year. Nolan came into this game sporting a 7-2 record and 2.49 ERA, and already had three shutouts at roughly the season’s halfway point.

With a red-hot Nolan taking the mound and a power-oriented offense (which would ultimately tie Atlanta for fourth in the National League in slugging percentage) ready to go against the struggling Fisher, the hometown faithful would not have been faulted for expecting a rather easy win. However, this game evolved differently.

Nolan was on his game early, easily disposing of the Mets 1-2-3 in the top of the first. Fisher got the first two Reds hitters without incident, but Pete Rose slashed a single to center. Rose’s trademark basepath aggressiveness let him down this time, however, as Mets center fielder Larry Stahl threw a strike to shortstop Bud Harrelson to nail Rose as he attempted to stretch the single into a double.

Nolan ran into a little trouble in the second. With one out, he hit Mets third baseman Ed Charles with a pitch. After Ron Swoboda flied out, second baseman Jerry Buchek singled Charles to second. Nolan was able to get catcher Jerry Grote to fly out to end the threat.

Both pitchers remained on their games through the fourth, but in the top of the fifth the Mets threatened. Buchek got his second hit of the game to lead off the inning, took second on Fisher’s bunt, and advanced to third when Pete Rose erred on the putout of Fisher. Nolan induced a groundout from shortstop Bud Harrelson to extinguish this threat.

In the bottom of the fifth, the Reds’ Deron Johnson drew a walk from Fisher. The plodding Johnson reached third when first basemen Lee May doubled to right, and the Reds seemed to be in business with runners on second and third and nobody out. However, Fisher coaxed three consecutive groundouts from the Reds’ Tommy Helms, Jimmie Coker, and Nolan to keep the Reds off the board.

The Mets threatened again in the top of the seventh. Ed Charles led off with a single and advanced to second as Ron Swoboda walked. Jerry Buchek singled to center for his third hit of the game, but Charles held up on the short hit as Reds center fielder Vada Pinson charged in for the ball. With the bases jammed and no outs, Mets catcher Jerry Grote, batting a weak.195, whiffed on three pitches, and Mets manager Wes Westrum ordered Fisher to bunt. Charles charged for the plate, but Fisher missed his bunt attempt on the attempted squeeze play. In the ensuing rundown, Charles managed to make it back to third only to find the advancing Swoboda already there. Reds catcher Coker tagged Swoboda for the second out of the inning, and Nolan induced a harmless fly from Fisher to escape the jam. What motivated manager Westrum to let Grote and Fisher hit for themselves with a chance to take the lead is lost to history. 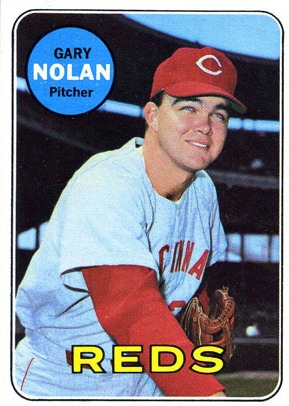 Things settled down from there. Neither team mounted a serious threat until the bottom of the ninth. With two outs, Reds first baseman Deron Johnson drew a walk and was replaced by pinch-runner Chico Ruiz. Lee May singled Ruiz to second, but Fisher got Tommy Helms to fly out and it was on to the 10th.

While the on-field action was taking place in the bottom of the ninth, 25 fans on the third-base side experienced a little excitement of their own. Beer throwing escalated into a brawl, requiring police intervention and the removal of one fan on a stretcher.2

The Mets went quietly in the top of the 10th, setting the stage for Perez’s dramatic moment. After Coker and Nolan grounded out, Floyd Robinson walked and Pinson singled him to third. With the ever-dangerous Pete Rose up next, Westrum elected to have Fisher intentionally walk Rose. Continuing a bad night for Westrum, Perez made him pay by driving a single past the outstretched glove of shortstop Harrelson to plate Robinson for the win. The hypercompetitive Rose was philosophical about being denied an opportunity to win the game himself. He said, “I was glad to see them walk me to get to Perez. They can do that any day. Especially when he gets a hit.”3

After the game, a jubilant but tired Nolan was philosophical about the Reds’ struggle to support him with runs. “They’ll get me some runs one of these days,” he said.4 Manager Dave Bristol, on the other hand, was effusive about his budding star. “It was a typical Nolan game,” he said. “He kept good stuff all game and didn’t tire.”5

A midseason contest between a fringe competitor and an also-ran is not normally the type of game considered noteworthy. However, the combination of 19-year-old fireballer Nolan gritting out a 10-inning, complete-game shutout and a young Tony Perez starting to build the clutch reputation that would define his career made this game a memorable one.