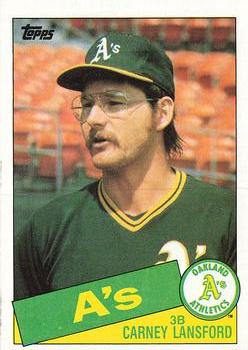 The Sunday-afternoon game on July 14 was the final game of the unofficial first half the season. The homestanding A’s entered the game in second place with a 45-41 record, six games behind the AL West-leading California Angels. The visiting Milwaukee Brewers, losers of nine of their last 11, were 37-46 and trapped in sixth place, 14 games behind the front-running Toronto Blue Jays in the AL East.

A crowd of 14,572 witnessed the afternoon contest that was played under typical Northern California sun-drenched skies. Temperatures hovered around the 60-degree mark as a strong breeze blew in off San Francisco Bay.

Bill Krueger drew the starting assignment for the A’s. The left-hander, who was in his third major-league season, was 6-8 with a 5.18 ERA. He had struggled in recent weeks, going 2-5 with a 9.09 ERA in his last nine appearances, seven of which were starts. He was opposed by veteran right-hander Moose Haas, who entered the game with a record of 7-4 and a 2.76 ERA.

After surrendering a leadoff double to Paul Molitor, Krueger retired the next three batters to keep the Brewers off the board in the top of the first. Haas was not as fortunate in the bottom of the frame.

After leadoff batter Dwayne Murphy lined out, Carney Lansford launched a no-doubter that found its way into the second deck. It was the third baseman’s 13th home run of the season. “I don’t hit too many like that,” a chuckling Lansford said after the game.1 The A’s weren’t finished yet. With two outs, Dave Kingman singled to center field and moved to second when Dusty Baker walked. Right fielder Mike Davis then sent a 3-and-2 pitch into the bleachers in right-center to increase the A’s lead to 4-0. The home run was Davis’s 15th of the season.

Krueger and Haas traded scoreless innings as the score remained unchanged until the bottom of the fifth inning. Along the way, first-base umpire Dale Ford ejected Brewers coach Andy Etchebarren in the second inning for umpire-baiting and Brewers manager George Bamberger “for arguing a terrible running-out-of-the-baseline-call in the fourth.”2 Bamberger, who was run for vociferously contesting Ford’s call that Cecil Cooper had run out of the baseline to avoid the tag of A’s second baseman Donnie Hill, defended his arguing after the game. “I don’t go out just to argue, but it was so obvious,” he grumbled to reporters.3

In the bottom of the fifth inning, the A’s opened things up and knocked Haas out of the game. Alfredo Griffin led off with a double to left and Murphy followed with a double to center that advanced Griffin to third. With runners on second and third, Lansford singled to right to plate Griffin as Murphy advanced to third. Bruce Bochte was issued an intentional pass before the Brewers summoned right-hander Bob Gibson from the bullpen.

Kingman greeted Gibson with a bases-loaded double to right that came within inches of clearing the fence. It drove in Murphy and Lansford and extended the Athletics’ lead to 7-0. Baker followed with a single to left that scored Bochte as the less than fleet-footed Kingman elected to stay at second. The Brewers recorded the first out of the inning when Kingman was caught stealing third as he and Baker tried to execute a double steal. Davis made the second out of the inning when he flied out to left field before Mickey Tettleton singled to put runners at the corners. Hill, the ninth hitter of the inning, singled to drive in the fifth run of the inning. After five innings, the Athletics had a 9-0 lead.

The Brewers got on the board in the top of the sixth. Molitor and Robin Yount started the inning with singles off Krueger. Cooper doubled to left to score Molitor as Yount raced around to third. Ted Simmons followed with a walk and Ben Oglivie singled to center to score Yount and end Krueger’s afternoon. A’s manager Jackie Moore turned to Keith Atherton to quell the Brewers’ uprising. The A’s right-handed reliever struck out Paul Householder and retired Jim Gantner and Charlie Moore on fly balls to center to end the inning with no further damage.

Left-hander Bob McClure relieved Gibson to start the bottom of the sixth and retired the side in order. Atherton, after issuing a leadoff walk in the top of the seventh, countered with a scoreless frame of his own. Both pitchers held the other team in check for the next inning and a half as the score remained 9-2 until the bottom of the eighth.

Future Hall of Famer Rollie Fingers took the mound in the bottom of the eighth. The soon-to-be 38-year-old Fingers was struggling to regain the form that made him one of the most successful closers in baseball during the 1970s and early ’80s. In his three prior seasons with the Brewers, Fingers was 12-11 with a 1.86 ERA and 80 saves. However, 1985 was a different story. Fingers, who hadn’t worked in five days, entered the game with record of 1-4, 10 saves, and an ERA of 4.58.

Fingers appeared to be on his way to an easy 1-2-3 inning when he retired Griffin on a groundout to second base and Murphy on a fly ball to center. However Lansford followed with his third hit of the game, a single to center, before Bochte drove in the game’s final runs with his fifth home run of the year.

After retiring the first two batters in the top of the ninth, Atherton yielded back-to-back singles to Molitor and Yount, who collected five of the Brewers’ 10 hits. Atherton then retired Rick Manning on a fly ball to center to earn a four-inning save, his second of the season.

Krueger earned the victory, running his record to 7-8. After the game the A’s manager was asked to defend his decision to remove Krueger despite having a 9-2 lead. “Hey, the bases were loaded and two runs had already scored,” Moore said. “Billy pitched well, but it was the sixth inning and I could see things starting to happen. (The Brewers) had not scored in 14 innings and they were due.”4

The win improved the A’s record to 46-41 and the team finished the first half of the season, as the day started, six games behind the California Angels. Despite their surprising first half, Moore felt the team was in need of some time away and used the analogy of a marriage to explain his point. “As you say in a marriage sometimes, the players are tired of looking at me and I am tired of seeing at them,” he said. “When we come back, we’ll start all over again. We just need a break.”5

The Brewers finished the first half 10 games under .500 and in sixth place in the AL East, ahead of only the lowly Cleveland Indians. In the team’s 84 first-half games, they managed to hit only 45 home runs, a startling drop-off from the Brewers teams of a few years before.

The A’s promising first-half finish did not continue through the rest of the season. After reaching a season-high 10 games over .500 (59-49) in early August, they went into a prolonged slump and finished the season with a record of 77-85, tied for fourth place in the AL West with the Minnesota Twins and 14 games behind the division champion Kansas City Royals.

In 1986 the A’s youth movement began in earnest when the team broke training camp with 21-year-old José Canseco. By midseason Moore was out as manager and eventually replaced by Tony La Russa. In September Canseco was joined by catcher Terry Steinbach and first baseman Mark McGwire and within two years the team won the first of three consecutive American League pennants.

The Brewers finished the 1985 season in sixth place in the AL East with a record of 71-90. Only three years removed from their American League championship season, in which they drew nearly two million fans and hit a league-leading 216 home runs, the feared lineup once known as Harvey’s Wallbangers managed to hit an American League-low 101 home runs while drawing 1.36 million fans.6

6 The 1982 Milwaukee Brewers were affectionately known as Harvey’s Wallbangers because of their Harvey Kuenn-led prolific offense that often sent balls sailing over the wall or off the wall.