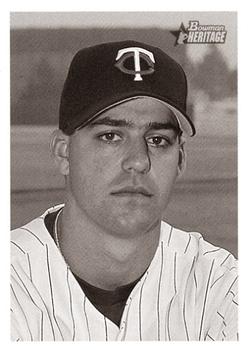 What better way to kick off the second half of the season than to renew a rivalry with your next-door neighbor at your new ballpark? On July 14, 2001, a sold-out crowd in Milwaukee saw the Twins beat the Brewers, 5-3, in the third game of the series at Miller Park. Arriving in droves after a drive on I-94, Twins fans were eager to check out this retractable-roof stadium, open on a beautiful 80-degree summer evening.

The Brewers were led by Davey Lopes, in the middle of a nearly three-year stint as Milwaukee manager, while the Twins were led by longtime manager Tom Kelly, who would resign after the season and be replaced by Ron Gardenhire.

Despite their shiny new ballpark, 2001 was not kind to the Brewers as they endured their ninth consecutive losing season. Free-agent signee Jeffrey Hammonds, who had batted .335 with 106 RBIs for the Rockies in 2000, was limited to 49 games in 2001 because of injuries. The Milwaukee offense was led by sluggers Richie Sexson and Jeromy Burnitz, who combined to hit 79 home runs with 225 RBIs, but the team’s pitching faltered as seven pitchers with 10 or more games started combined for a 5.18 ERA.

The Twins, on the other hand, were a team on the rise. In 2001 they would post their first winning season in nine years and go on to become a force in the American League Central the rest of the decade. Their top three starting pitchers (Brad Radke, Eric Milton, and Joe Mays) would combine for a 3.80 ERA and two young position players, first baseman Doug Mientkiewicz and center fielder Torii Hunter, would dazzle fans all summer with spectacular Gold Glove-winning plays in the infield and outfield.

The July 13-15 contests were the first games after the All-Star break and featured an unusual Thursday-Friday-Saturday format. The Twins and Brewers split the first two games, setting up Saturday night as the deciding game of the weekend. The sellout crowd of 43,624 at the new ballpark included many Minnesotans. “This was like a home game – except we were outside,” said first baseman Mientkiewicz. “Our fans were loud tonight.”1

The Brewers were 43-45 going into the game (nine games back of the NL Central Division-leading Chicago Cubs) and the Twins were 56-33, leading the AL Central by four games over the Cleveland Indians. The pitching matchup featured right-hander Jamey Wright, who would lead the Brewers with 33 games started in his second season with the team, and left-hander Eric Milton, recently selected to the All-Star team in his fourth season with the Twins.

The game started out as a pitchers’ duel. Wright struck out five of the first six batters he faced and Milton fanned four of his first six. “Both teams said the afternoon sun glaring off the batter’s eye contributed to the strikeouts,” Jim Souhan of the Star Tribune wrote.2 The Twins remained hitless until catcher A.J. Pierzynski’s single in the top of the fifth, and the Brewers struck first in the run column with a two-run homer by second baseman Ronnie Belliard in the bottom of the fifth.

The Twins tied the score in the sixth with two unearned runs via errors by Wright and first baseman Sexson. The inning also included a slow roller down the third-base line, a walk, and a double play up the middle, causing Twins manager Kelly to note, “We scored two runs and we didn’t get it past the pitcher’s mound.”3 Wright had an uneven outing: He allowed only three hits in 6⅔ innings but also made an error and walked four.

Twins right-hander Bob Wells, in relief of starter Milton in the bottom of the seventh, gave up the lead on Ronnie Belliard’s double. However, Wells wound up as the winning pitcher when the Twins again took the lead (this time for good) in the top of the eighth.

After Mientkiewicz’s single, third baseman Corey Koskie hit a 1-and-2 slider from Brewers relief pitcher David Weathers for a two-run homer, putting the Twins up 4-3. The blast to right-center traveled an estimated 425 feet, another testament to the blossoming of the Canadian-born hitter who would end the season with 26 home runs and 103 RBIs. “I think it’s a maturing thing,” said Koskie, who was in his third full season in the majors. “It’s knowing I’m going to strike out and having the confidence to strike out and swing the bat. As long as I get three good swings in that at-bat – I feel with three good swings I’ve got a pretty good chance to get a hit.”4

Brewers pitcher Chad Fox also had an uneven outing, allowing two hits, two walks, and a run in one inning of relief, putting the Twins ahead by the eventual final score of 5-3. Twins relief pitcher LaTroy Hawkins earned his 24th save of the season by retiring Richie Sexson, Alex Sanchez, and Jose Hernandez in order in the bottom of the ninth.

The game lasted 3 hours and 5 minutes. For 2002, the Twins and Brewers would be designated natural rivals by Major League Baseball, which meant they would face each other in interleague play every year. The opening of Minneapolis’s Target Field in 2010 would provide fans with another reason to journey across state lines and root on these two Midwestern teams.

The 2001 game at Miller Park featured a tale of two teams going in opposite directions: While the Brewers were on their way to a ninth consecutive losing season, the Twins were a team on the rise, becoming a dominant force in the American League Central Division for the rest of the decade. The Brewers finished 2001 at 68-94 (fourth place in the NL Central), while the Twins finished second to the Cleveland Indians with a record of 85-77. Highlighting Minnesota’s success were two young position players, first baseman Doug Mientkiewicz and center fielder Torii Hunter, who delighted baseball fans around the Upper Midwest all summer with dazzling defensive plays en route to their first Gold Glove awards.

In addition to sources cited in the Notes, the author also consulted Baseball-Reference.com and Retrosheet.org.