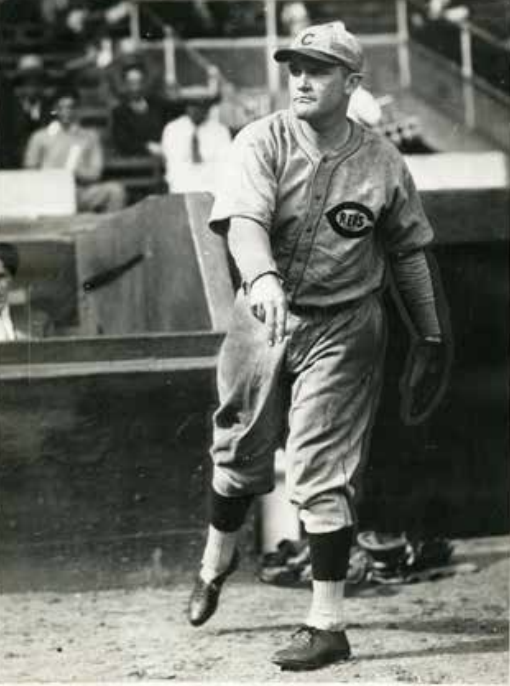 A warm, humid Sunday afternoon hovered over the west side of Cincinnati on July 16, 1933, as the struggling hometown Reds (35-49, in the cellar of the National League) got set to do battle in a doubleheader against the mighty New York Giants at Redland Field. The Giants were at the other end of the standings, having posted a strong 47-32 mark entering the day’s play, giving them a 3½-game lead atop the circuit.

Even so, Bill Terry’s fatigued players were in the middle of a horrendous 21-game road trip as their train rolled into Cincinnati’s brand-new Union Terminal. The grand facility, now used by all National League teams coming into town to play the Reds, had been completed just three weeks before the start of the 1933 season. Magnificently shining at the foot of Price Hill, the large dome of the station cast its opulent shadow upon the ballpark, just five blocks away. “Among the seven hills of the Queen City has been erected a temple of transportation,” proclaimed the Cincinnati Enquirer on March 31 as the very first trains were coming and going. “So beautiful is this edifice, so practical its plan, that all who behold it will marvel.”1

Upon leaving Harlem a fortnight earlier, the Giants held a six-game advantage over the St. Louis Cardinals before proceeding to lose seven in a row — and a trip to Cincinnati appeared to be the very tonic they needed. “When the Giants entered this enterprising Ohio city Saturday, it was with considerable relief,” the Brooklyn Eagle reported. “Having been handled roughly in both Chicago and St. Louis, the Terrymen looked for respite in the bailiwick of the Reds, the ignominious last-place team.”2

But instead of an easy time over the long afternoon, the New Yorkers found yet another fight on their hands.

“The Giants are leading the league and the Reds are trailing the seven other clubs,” Jack Ryder acknowledged in the Cincinnati Enquirer after summarizing the day’s events, “but they looked so much alike in the double-header yesterday at the yard that a stranger would have had difficulty in choosing between them. … Not for years has so much splendid baseball been crowded into a single afternoon on the old home lot.”3

John Drebinger, covering the series for the New York Times, concurred as he wrapped up his own notes from the press box: “The top and tail-end teams of the National League battled each other for more than five and a half hours today, with honors so evenly divided that for the most part a crowd of about 8,000 seemed unable to tell one club from the other.”4

In the opener, Charles “Red” Lucas took mound for the home team, the Tennessee native known as the “The Nashville Narcissus.” Lucas had been a source of stability during Cincinnati’s struggles over the past several seasons, having led the National League in complete games in 1929, 1931, and 1932 despite the Reds finishing in last or second-to-last place each year. After starting 1933 with a 5-1 record, Lucas had lost his last seven decisions dating back to May 19; nonetheless, he appeared to be returning to form with his most recent effort. “In his out[ing] before this one, Lucas served notice that he again was in prime pitching condition,” opined The Sporting News as Lucas got ready to face the Giants, “by hurling a good game against Boston in which the decision went against him.”5

Lucas was opposed by Roy Parmelee, who in 1933 had secured his first regular spot in Terry’s rotation after four seasons of sporadic duty with the Giants. He entered the game with a solid 7-3 record and a 3.06 ERA.

Their modest success in the recent past notwithstanding, little suggested the forthcoming performance that Lucas and Parmelee proceeded to author — which, coupled with the sparkling defense behind them, dazzled Redland Field spectators and batters alike as few could remember. “The pitching was equal to anything ever seen in a World Series,” Ryder wrote, “and the two teams backed up their expert hurlers with everything they had in stock.”6

Over the course of the game, only three Giants reached as far as third base. They mounted a charge in the third inning, as a single by Terry sent Hughie Critz racing for third with two out. But Lucas was subsequently able to get feared slugger Mel Ott to tap slowly to rookie Reds’ shortstop Otto Bluege, nine years the junior of his more famous brother, Ossie, and enjoying a great day in the field. Parmelee matched Lucas stride for stride, keeping the Reds off the scoreboard as well.

The Giants’ next true chance didn’t occur until the eighth — one which was “canceled by poor coaching,” said Ryder.7 Blondy Ryan singled and Lefty O’Doul followed with a double into the left-field corner. The Reds’ left fielder, Johnny Moore, darted to the ball and retrieved it before Ryan had even reached third base. “But (Ryan) was hurried on to the plate,” wrote Ryder, “and [Sparky] Adams’s accurate relay cut him down four steps from his destination.”8 Although O’Doul advanced to third on the throw home, he was stranded when Critz popped up to second baseman Jo-Jo Morrissey for the third out.

The New York team challenged Lucas no further. Neither team was able to put up a run, with the battle continuing into extra frames. “In the last seven innings,” Ryder wrote, “only two Giants reached first base and none got as far as second.”9 Parmelee was equal to the task, with only one Cincinnatian reaching third as the Reds “never actually threatened.”10

In the Reds’ 13th, Lucas and George Grantham were intentionally walked to load the bases after Morrissey reached third with one out, but the Reds could not score as Moore and Chick Hafey rolled into force outs. An even better opportunity presented itself for Cincinnati in the 14th, as Rollie Hemsley, pinch-running for Ernie Lombardi, was left on third with nobody out as Morrissey, Lucas, and Wally Roettger could not come through. “It took some high-powered flinging to stave off defeat in those two rounds,” Drebinger wrote, “but Parmelee proved himself equal to it.”11

After Lucas retired the Giants yet another time in the top of the 15th, his teammates finally got him a run in the bottom half. “The Giant right-hander, after some trying moments in the thirteenth and fourteenth, bogged down under the strain in the fifteenth,” Drebinger reported.12 After Grantham led off with a single, Moore sacrificed him to second and Hafey was walked intentionally. Next came Hemsley, who along with Lombardi had nabbed would-be Giant basestealers earlier in the game from behind the plate. The backup catcher “shot a single to right which just escaped the tip of Critz’s glove” as Grantham sprinted across the plate, giving the Reds the marathon opener of the twin bill in 3 hours and 25 minutes by a 1-0 score.13

“For Red fans, the big noise of the day was the comeback of Red Lucas,” concluded Ryder of the pitcher’s first win since May 14. Lucas “has been in a losing rut for two months but is now on earth again. The redhead pitched so classy a game that it will not be soon forgotten by the big Sunday crowd which had the pleasure of observing it. … It was his handsomest victory of the season and one of the best on record by any slabber during the current season.”14

The Brooklyn Eagle, meanwhile, suggested that the performance by both pitchers was “strongly reminiscent of the Hubbell-Carleton duel a few Sabbaths ago,” in reference to a 1-0, 18-inning Giants win over the Cardinals at the Polo Grounds on July 2 — in which Tex Carleton went 16 scoreless innings for St. Louis, only to be outdone by Carl Hubbell’s 18 shutout frames for New York.15

Indeed, it was a signature season for the Meal Ticket. In the nightcap at Cincinnati, Hubbell spun yet another shutout in giving the Giants a 1-0 victory over Paul Derringer as he led New York toward the pennant.

In addition to the sources cited in the Notes, the author also consulted