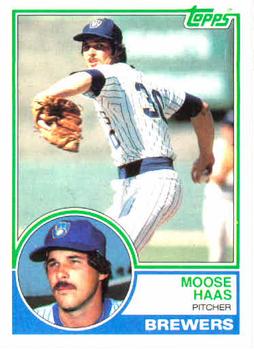 The Milwaukee Brewers were 44-39 midway through July 1983, not matching their pace of the previous year when they won the American League pennant. Not only that, in in a loaded American League East Division in 1983, they were buried in fifth place.

Their opponents for a Saturday night game at County Stadium on July 16 were the Minnesota Twins, who were going through another agonizing season; at 37-52, Minnesota was in sixth place in the West and only a game out of the cellar.

The Brewers had won the first two games of this four-game series and were on a four-game winning streak as they faced Minnesota left-hander Frank Viola, in his second season and on his way to stardom. However, his early career wasn’t good; he had a 5.30 earned-run average coming into the game as well as a tendency to give up the long ball.

Against the southpaw, Brewers manager Harvey Kuenn sat left-handed-hitting Cecil Cooper, who was leading the league in runs batted in and had hit his 18th home run of the season the night before. Kuenn was also without Ben Oglivie, who was still a day away from coming back from a strained shoulder. Ted Simmons also got a night off. Simmons had been the team’s regular catcher, but he had been the designated hitter the last few games to make room behind the plate for Bill Schroeder, who had been called up from the Pacific Coast League earlier in the week. Schroeder had hit his first major-league home run in the series opener vs. the Twins.

Minnesota manager Billy Gardner shook up his lineup, putting Mickey Hatcher in the leadoff spot. The night before, Hatcher had two hits, including a home run, and upped his season batting average to .326. He also made a costly baserunning blunder that drew criticism from Gardner. Hatcher’s response to Gardner was that he wanted to be traded. Gardner ignored the outburst and announced that Hatcher would be in the starting lineup all weekend.1

Moose Haas, with a 6-2 won-loss record and an ERA of 3.97, was on the mound for Milwaukee, and he retired the Twins in order in the top of the first.

In the bottom of the inning, Viola struggled with his control and threw 25 pitches. After giving up one-out singles to Ed Romero and Paul Molitor, he walked Robin Yount on four pitches. Mark Brouhard hit a hard grounder off Gary Gaetti’s glove at third. Shortstop Ron Washington fielded the carom and threw to John Castino at second to force Yount as Romero scored.

Schroeder came up with one out in the second. Since his home run two nights before, he was hitless in five at-bats, striking out in four of them. Against Viola, Schroeder made solid contact, sending a long home run that landed about 10 rows from the top of the bleachers in left-center.

Haas had retired the first six batters before Dave Engle led off the third with a bunt single. He was quickly erased as Tom Brunansky grounded into a double play.

The Twins got two runners on in the fifth, including one to third after a leadoff single by Gary Ward, who stole second with one out and continued to third when Schroeder bounced his throw into center field. Gaetti popped out, and, after Engle walked, Brunansky ended the threat by flying out. The Twins got only one more hit, an infield single by Randy Bush in the seventh.

Viola pitched well through the middle innings, spacing out the Brewers baserunners. In the seventh, the Brewers’ number-nine hitter, Jim Gantner, homered to make the score 3-0.

When the Brewers’ Molitor and Yount led off the eighth with homers, Viola was pulled and Rick Lysander finished up.

The Twins got something going in the ninth. Molitor, at third base, fumbled Hatcher’s grounder to start the inning, and Castino walked. Kent Hrbek hit a soft groundball that Haas fielded. His throw to first hit Hrbek and bounced away as Hatcher came around to score. However, first-base umpire Don Denkinger ruled that Hrbek had not been in the three-foot box down the baseline. Hrbek was called out for interference, and the runners returned to their original bases. Ward then grounded to Molitor, who started a game-ending double play, and Milwaukee had a 5-0 win.

Schroeder not only had his second home run of the game, he got praise from Haas, who said, “We pitched mainly fastballs tonight. Schroeder was working the guys inside all night and it paid off.”2

Gardner was not impressed with Haas: “We’ve faced better. We’re just not hitting the ball, that’s all. He made a lot of bad pitches, but we didn’t hit them.”3

Haas was efficient, throwing only 89 pitches in the game, including just 11 in the third and fourth innings. It was Haas’s third straight winning decision, part of an eight-game winning streak for him. He won 9 of his last 10 decisions to finish the year at 13-3 with a 3.27 ERA. The win for the Brewers was also part of an eight-game winning streak. For the Twins, their losing streak reached eight games.

Viola finished 7-15 with a 5.49 ERA but the next year started a run of five straight years with at least 16 wins, culminating with the Cy Young Award in 1988.

The Brewers finished the season at 87-75, well short of their 95 wins the previous year and good only for fifth place in the AL East.

The Brewers then dropped precipitously in the standings, finishing with the worst record in the American League in 1984 and with losing records the next two years. However, they came back in 1987, helped by a second-year pitcher who was making news the weekend of the 1983 Brewers-Twins game described in this article.

On Friday night, July 15, 1983, 18-year-old Juan Nieves made his first professional start, for the Beloit Brewers in the Class-A Midwest League. A native of Puerto Rico (Puerto Rican players were not yet subject to the major-league draft), Nieves had signed for more than $100,000, reportedly the largest contract the Brewers had ever awarded to a rookie.4

In his starting debut, Nieves pitched six innings, striking out eight, walking three, and not allowing any hits against the Madison Muskies. On July 17 the Brewers brought him to County Stadium to throw before the game and give Milwaukee pitching coach Pat Dobson a chance to see the player they had tabbed as a phenom. “He’s got a great delivery,” said Dobson of Nieves. “That’s why he throws strikes.”5

Nieves was in the majors by 1986 and the following year pitched a no-hitter for Milwaukee, the ninth win in what was a 13-game winning streak for the Brewers to start the 1987 season.

The Brewers rebounded that season to win 91 games, the most since their pennant-winning season, but all that got them was third place as the American League East had a pair of dominant teams in Detroit and Toronto. Nieves helped the Brewers again in 1988, but he never pitched again in the majors as he tore his rotator cuff.6

The Twins finished the 1983 season at 70-92, 10 games better than 1982, when they had the worst record in the majors, and this record put them in a fifth-place tie with California in the AL West. However, they had a core of players who lifted them in the standings in the coming years. In 1984 outfielder Kirby Puckett joined Brunansky, Hrbek, Viola, Gaetti, and catcher Tim Laudner.

With this group, the Twins still weren’t as good as the Brewers in 1987, but Minnesota had the good fortune of playing in the West Division, where their 85-77 record put them into the playoffs. The Twins parlayed that into a World Series championship and followed up with another title four years later.

As for the Brewers, though Molitor and Yount continued with their Hall of Fame careers, as of 2019 the team still had not returned to the World Series.

In addition to the sources cited in the Notes, the author also relied on his own scoresheet of the game, which he attended as part of a large group in Milwaukee for the Society for American Baseball Research convention.

6 Rory Costello’s biography of Nieves is on BioProject: sabr.org/bioproj/person/937353ab.