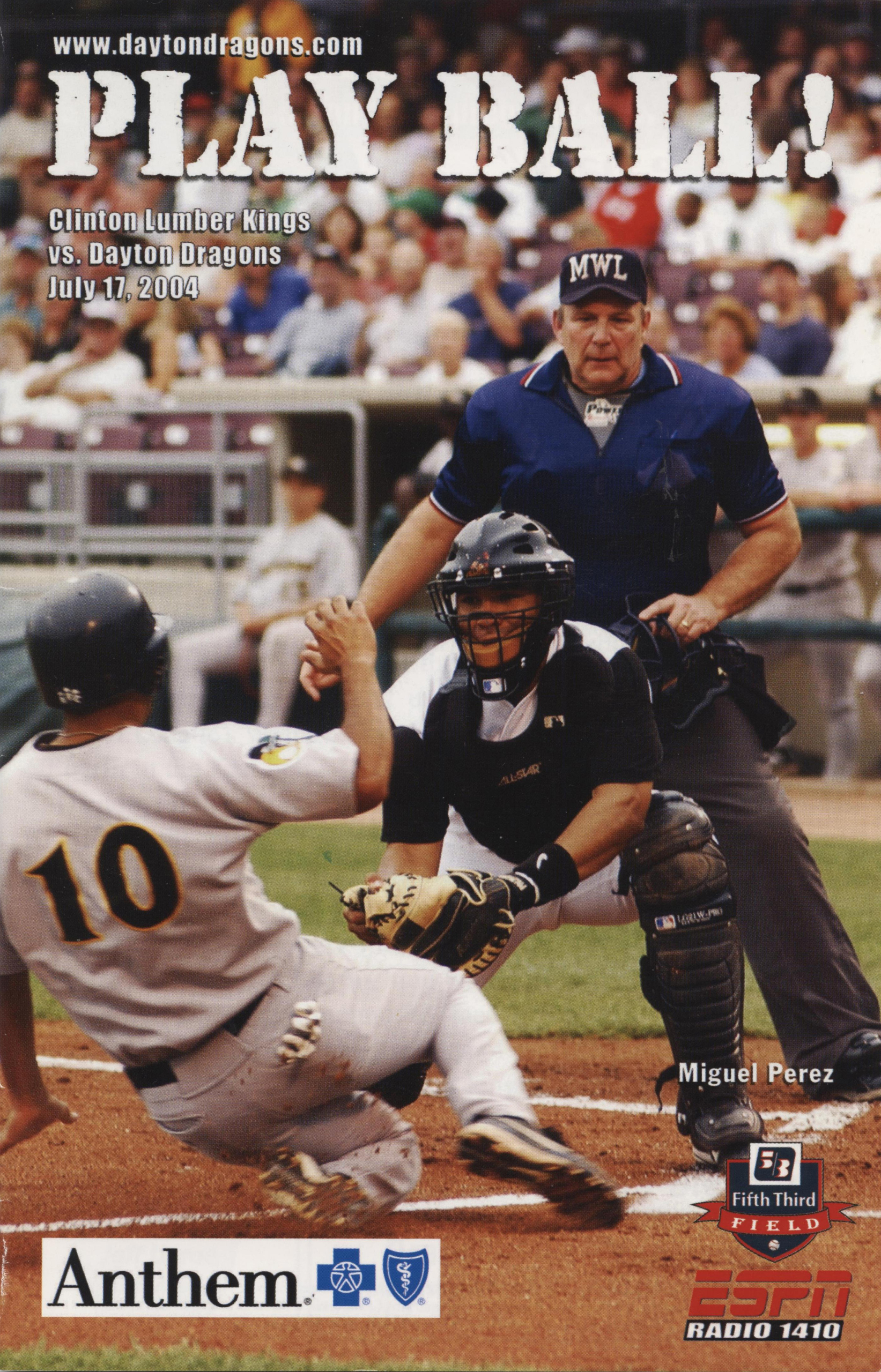 Just as the major leagues have big-market and small-market teams, so too do the minor leagues. In the Class-A Midwest League, it would be difficult to find two representatives more different than the Dayton Dragons and the Clinton LumberKings.

Clinton, Iowa, joined the league in 1954 as an expansion team, when the circuit was still known as the Mississippi-Ohio Valley League. Dayton’s franchise moved in from Rockford, Illinois, in 2000. Clinton, located on the banks of the Mississippi River, is a city of roughly 25,000. Dayton anchors an Ohio metro area of over 750,000. Clinton plays in a bandbox of a ballpark built in 1937 as part of the Works Progress Administration (WPA). Dayton packs fans into 8,000-seat Fifth Third Field, which typically attracts about six times as many fans per season as does Clinton’s NelsonCorp Field (née Riverview Stadium).1

Regardless of market size, both teams were still stocked with players provided by major-league organizations. Dayton was a farm club of the nearby Cincinnati Reds, while Clinton was affiliated with the Texas Rangers. And in mid-July of 2004, the LumberKings were having the better year.

In the first half of the Midwest League’s 2004 season, Dayton had finished last in the six-team Eastern Division with a record of 27-43, 15 games behind the South Bend Silver Hawks. Clinton had finished the first half with a winning record of 35-33, and were in fifth place in the eight-team Western division, 7½ games in back of the Kane County Cougars.

Three weeks into the second half of the season, Dayton sat at 9-12, in fifth place in the Eastern Division, four games behind the Fort Wayne Wizards. On the positive side, the team was riding a three-game winning streak. Visiting Clinton was in a battle for first place in the Western Division, tied with Kane County at 13-8, with both only a half-game ahead of the Swing of the Quad Cities.

After leadoff man Brian Cashman grounded out, Clinton got two baserunners aboard on an error and a walk in the top of the first inning. However, Josh Kreuzer flied out to center and Dragons left fielder Kyle Smith made a diving catch to retire Andrew Wishy and the LumberKings’ scoring threat. In the bottom of the first, Clinton starter Brian Mattoon set the Dragons down in order, as Dayton failed to hit the ball out of the infield.

After failing to capitalize on their scoring chance in the first, the LumberKings broke through in the second with a mix of timely hitting and erratic pitching by Dayton’s Justin Gillman. Emerson Frostad doubled to start the frame and after Abigail Sandoval grounded out, Cody Clark reached on an error and Luke Grayson singled to load the bases. LumberKings center fielder B.J. Cashman drove Emerson home with a single, after which Gillman issued back-to-back bases-loaded walks to force in two more runs. Josh Kreuzer drove in another run with a sacrifice fly, after which Wishy popped out to second for the final out. The visitors had put the home team in a 4-0 hole early.

The Dragons managed a tepid response in the bottom of the inning by mounting back-to-back singles by Walter Olmstead and Jeff Urgelles. After Clinton center fielder B.J. Cashman made a fine catch to retire Kyle Smith, a single by Tiago Magalhães2 loaded the bases with one out. Miguel Perez stroked a fly ball to left to bring Olmstead home, but Dragons shortstop Will Hudson grounded out to end the inning and strand two runners. Instead of a big rally, the Dragons settled for a lone tally to cut Clinton’s lead to 4-1.

Clinton second baseman Emerson Frostad started the LumberKings third with another hit, this time a single. Abigail Sandoval brought him home with a double that knocked Gillman out of the game. Dragons manager Alonzo Powell called upon Carlos Bohorquez to put out the fire and the right-hander responded by setting down the next three LumberKings to keep the score 5-1.

Clinton starter Brian Mattoon looked to be cruising toward a victory as he mowed down the Dragons lineup in the middle innings until Dayton seized its opportunity to get back into the game with a big rally against the LumberKings lefty in the bottom of the sixth.

Luis Bolivar doubled to start things off, and Cody Strait’s single put runners on the corners. Joey Votto drove a sacrifice fly to left field to score Bolivar, then Olmstead followed with a home run to left so deep that “only a bounce off the concession stand roof in left kept [it] from leaving the stadium outright.”3 With the lead cut to 5-4, Clinton skipper Carlos Subero called upon Cesar Herrera to relieve Mattoon. Herrera walked the first batter he faced, but set down the next two batters to preserve Clinton’s now slim lead.

After the Dayton faithful had their seventh-inning stretch, the Dragons rewarded the crowd by rallying to tie the game. Miguel Perez stroked a leadoff double and, with a sacrficie, Will Hudson bunted him to third base. With one out, Bolivar singled to drive in Perez and tie the contest. Bolivar was caught stealing and a subsequent single by Strait and a walk to Votto failed to generate any more runs for the Dragons. But they had pulled even with the LumberKings after seven, 5-5.

Neither team could mount a rally in the eighth or ninth and the game proceeded to extra innings. Opposing relievers Joldy Watts of the LumberKings and Brock Till of the Dragons shouldered the pitching duties in the extra frames. Watts shut down the Dragons on one hit in his 3⅓ innings of work, while Till scattered four Clinton hits in 3⅔ innings.

Something had to give and the LumberKings finally broke the tie in the top of the 13th inning. Justin Hatcher doubled to lead off the inning. Grayson failed to move him over when he grounded out to short, but on a soft hit from Brandon Cashman, Dragons shortstop Hudson misplayed the ball and Hatcher came home to give Clinton a 6-5 lead. Till recovered to retire the side but Dayton came to bat in the bottom of the 13th needing a run to keep its hopes alive.

The Dragons got a glimmer of hope on Strait’s leadoff single, but the Dayton center fielder didn’t advance any farther as Votto and Olmsted flied out and Urgelles struck out to wrap up the victory for the LumberKings after 4 hours and 10 minutes.

Its winning streak snapped, Dayton went on to finish last in the Eastern Division’s second-half standings with a 21-49 record. (The Dragons’ overall record of 48-92 was the worst in the Midwest League that season.) Clinton finished 74-64 overall and clinched a playoff spot by finishing 39-31in the second half, one game behind Kane County. Since the Cougars also won the first-half title, the LumberKings assumed the playoff slot of the Western Division second-half champs.

The LumberKings swept second-half wild card Cedar Rapids in the first round of the playoffs, then were swept in turn by the Kane County Cougars in the semifinal series.

Off the field, the Dayton was recognized by Baseball America during the offseason with the Bob Freitas Award, recognizing the franchise’s sustained level of excellence at the Class-A level.4 Dayton continued to draw sellout crowds for years, and in 2011 set an American record for consecutive sellouts by a professional team at 815.5 The streak is still in effect (1385 after the 2019 season, according to the Dragons web site).

The game featured future major leaguers Cody Clark, Miguel Perez, Carlos Guevara, and Joey Votto. The first three all had relatively brief major-league careers, but Votto went on to become a perennial All-Star, 2010 NL MVP, and a mainstay at first base for the Cincinnati Reds.

In addition to the sources cited in the Notes, the author also relied on the websites of the Dayton Dragons, Clinton LumberKings, and Minor League Baseball, along with Baseball-reference.com, and the websites of SABR members David Malamut (mwlarchives.com) and Joel Dinda (MWLguide.com).

Special thanks to fellow SABR members Mike McCullough, Rob Neyer, and John Schleppi for their invaluable assistance in providing copies of their scorecards from the game.

2 Magalhães was listed in the game program as Tiago Campos, which is also how his name appeared in the Baseball America Almanac 2005, 114.