In the spring of 1860, the Excelsior Club of South Brooklyn laid plans for what was termed “a grand excursion,” the first extended trip by a baseball team on record.[fn]“Out-Door Sports: Base Ball: A Grand Excursion in Contemplation,” [New York] Sunday Mercury [hereafter cited as NYSM], 29 Apr 1860; “Base Ball: A Grand Excursion in Contemplation,” Brooklyn Daily Eagle, vol. 19, no. 102 (30 Apr 1860), p. 2, col. 5.[/fn] The tour, involving matches in a half dozen cities and towns through upstate New York, would also become a showpiece for the skills of the Brooklyn players, especially pitching phenom Jim Creighton.

The Troy Daily Whig interpreted the Excelsior tour as “a crusade through the provinces for the purpose of winning laurels.”[fn]“A Exciting Base Ball Match,” Troy Daily Whig, vol. 26, no. 8014 (4 Jul 1860), p. 3, col. 4.[/fn] Regarding the first game, on Monday, July 2 against the Champion of Albany, the Whig observed that the Excelsiors had “pretty well reduced base ball to a science,” proving themselves to be “good batters, capital catchers, and their pitching was terrific.”[fn]Ibid.[/fn] That combination led to 24-6 Excelsior victory. An Albany newspaper reported that Creighton “pitched balls swift as they could be sent from a cannon, and they were most difficult to strike.”[fn]The quoted remarks, from an unnamed Albany journal, were reprinted in “Out-Door Sports: Base Ball: Excelsior (of South Brooklyn) vs. Champion (of Albany),” NYSM, vol. 22, no. 28 (8 July 1860), p. 7, col. 2, and “Out-Door Sports: Base-Ball: Excelsior Base Ball Club,” Porter’s Spirit of the Times, vol. 8, no. 20 (10 Jul 1860), p. 308, col. 3.[/fn]

Among the more than 1,000 spectators at the Champion-Excelsior game was “an immense delegation of Trojans,” that is, players from the Victory Base Ball Club of Troy, the Excelsiors’ opponent on the following day. The Victory boys promised that “if they did not beat the strangers this afternoon, they would give them harder treatment than they had experienced at the hands of the Champions.”[fn]“Base Ball,” Troy Daily Whig, vol. 26, no. 8013 (3 Jul 1860), p. 3, col. 5.[/fn] The result was the closest and lowest scoring game of the tour — a 13-7 victory for the Excelsiors, who went ahead with nine runs in the first two innings.

The Excelsior club’s desire to visit Buffalo — and for that matter to tour at all — was motivated at least partially by a reason unrelated to the game. The Buffalo Daily Courier reported that Excelsior club members had “for years past, been anxious to make a visit to the [relatively nearby] Falls of Niagara, and have desired a challenge from the Niagaras as an inducement to make the tour.” The members of the Niagara of Buffalo were eager to oblige, according to the Courier, because the club’s formation in 1857 and its introduction to the New York Game owed a lot to the enthusiasm of a former Excelsior club member who had relocated to Buffalo.[fn]William J. Ryczek, Baseball’s First Inning (McFarland, 2009), p. 147, claims that two allegedly former members of the Brooklyn Excelsiors, Joseph B. Bach and Richard Oliver, were instrumental in the genesis of the Niagara club. Bach and Oliver, however, were elected officers of the Excelsior club in November 1857 and remained in the Greater New York City region for the rest of their lives.[/fn]

At 2 p.m. on July 4, the team traveled to Niagara Falls, where they enjoyed a ride “upon one of the finest rivers in the world,” saw “the intrepid [French stuntman Charles] Blondin walk“ on a tightrope stretched 160 feet above the gorge at the base of the falls (a feat he had first performed in 1859), took “a hurried view” of the falls, and were “hospitably treated” at the prominent Clifton House Hotel on the Canadian side.[fn]“The City and Vicinity: Base Ball—Excelsiors and Niagaras,” Buffalo Daily Courier, vol. 25, no. 157 (4 Jul 1860), p. 2, cols. 4-5; Freyer and Rucker, eds., Peverelly’s National Game, p. 57.[/fn] 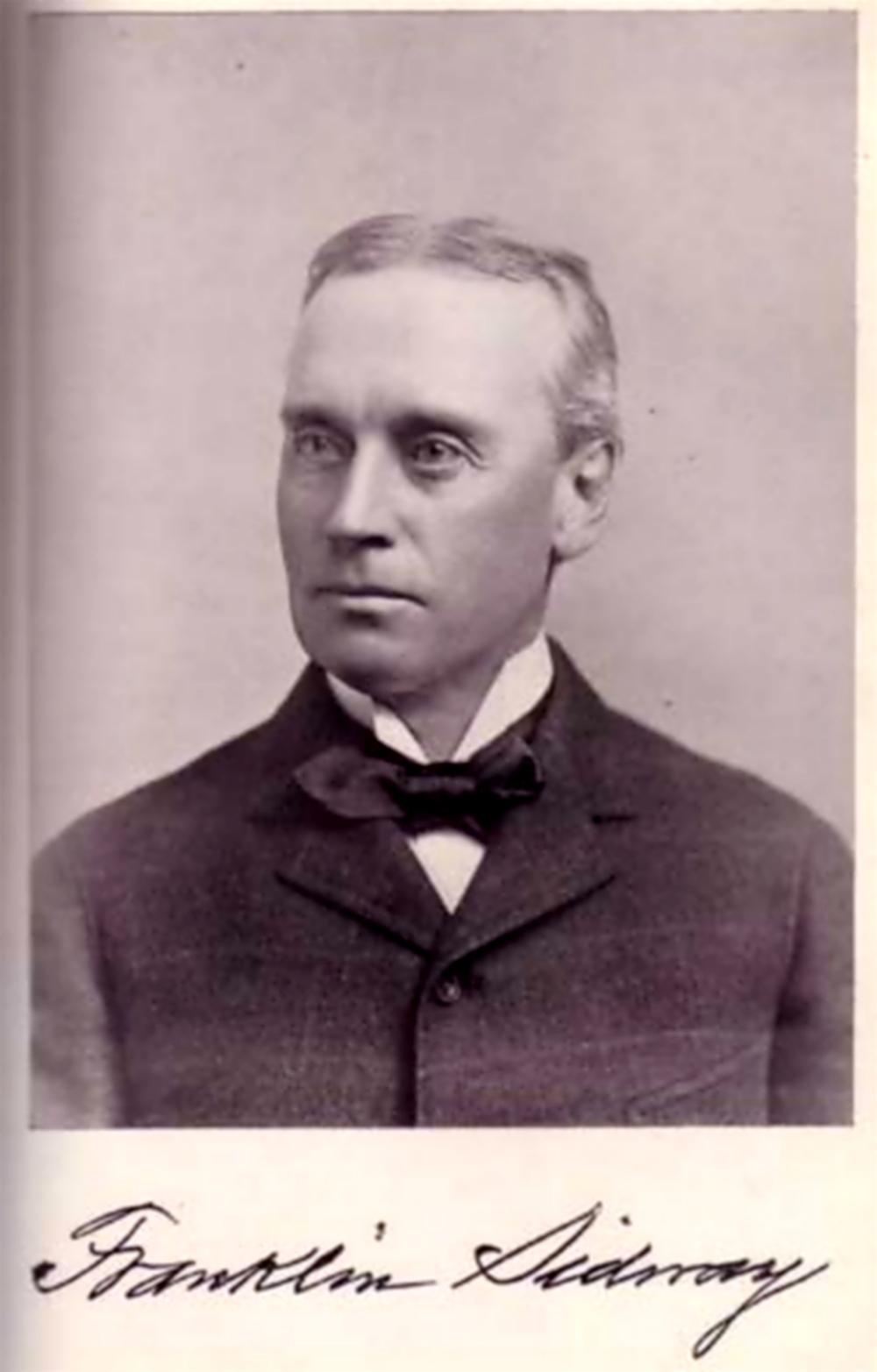 On the following day (Thursday, July 5), the clubs met on the Niagara grounds before a crowd of between two and three thousand spectators. The Niagaras correctly anticipated that the Excelsiors would win the game, but they were, according to the Buffalo Express, quite surprised and overwhelmed by the differences that separated the Excelsiors’ style of play from their own:

The manner in which the Brooklyn chaps handled the ball—the ease and certainty with which they caught it, under all circumstances, the precision with which they threw it to the bases, and the tremendous hits they gave it into the long field … made the optics of the Buffalo players glisten with admiration and protrude with amazement.[fn]“Base Ball—Match of the Niagaras with the Excelsior Club of Brooklyn,” Buffalo Morning Express, vol. 15, no. 4470 (6 Jul 1860), p. 3, col. 1.[/fn]

On the following day, the Excelsiors took an eastbound train to Rochester, where on July 7, the two clubs played. Like most of the Excelsior’s previous tour opponents, the Flour City club, which had been organized in May 1858, was overwhelmed by the visiting club, this time 21-1. After receiving a telegram announcing the result, Porter’s Spirit of the Times characterized the result as “the most complete victory on record.”[fn]“Out-Door Sports: Base-Ball: Excelsior of Brooklyn vs. Niagara of Buffalo,” Porter’s Spirit of the Times, vol. 8, no. 20 (10 Jul 1860), p. 308, col. 3, & p. 309, col. 1.[/fn]

After a day of rest, the Excelsiors returned to ball playing on Monday, when they faced the Live Oak Base Ball Club of Rochester in a game frequently interrupted by rain. The Live Oaks played marginally better than Flour City players, but still suffering a 27-9 loss. Then the Excelsiors traveled to Newburgh to play their final tour game, against the Hudson River club.

The first five tour games had been covered entirely by local reporters. For the sixth and last game, however, the weekly New York Clipper sent a reporter, almost certainly their base ball editor Henry Chadwick, who responded with a column-long article. He was highly disappointed with the Hudson River grounds:

The condition of the ground was not favorable for play, as it is as yet rather rough, and home base heads the field in the wrong direction, the locality in the rear of what is now the 3d base being the most desirous place for the head of the field.[fn]“Base Ball in Newburgh: Excelsior vs. Hudson River,” New York Clipper, undated July 1860 clipping in the Mears Collection of the Cleveland Public Library.[/fn]

The reporter observed that the Excelsiors’ quality of play was not quite what it had been pre-tour. Nevertheless, the Excelsiors still managed to score 14, 10, and 13 runs in the 4th, 7th, and 9th innings en route to a 59-14 victory.[fn]Ibid.[/fn]

Finally, on July 12, eleven days after they had departed, the Excelsiors returned home, “somewhat damaged in the way of fingers, and not a little worn out by the fatigue of almost constant travel…”[fn]“Out-Door Sports: Base Ball: Excelsior (of South Brooklyn) vs. Hudson River (of Newburg),” NYSM, 15 Jul 1860, p. 5, col. 3.[/fn] Given that they had traveled nearly 1,000 miles and played six games during this period, it was, according to the Sunday Mercury, quite natural to suppose that they must have been pretty well “played out” by the end of their journey.[fn]Ibid.[/fn]

The Excelsiors had completed what might be considered the first extended baseball road trip—an activity undertaken by all professional clubs since the formation of the National League in 1876. They demonstrated a high-quality style of play that had not been seen before by the upstate clubs. And their string of victories earned them a reputation as one of the best clubs of the nation, worthy of playing against the Atlantics of Brooklyn, universally considered the unofficial “champion” of Greater New York City base ball. Indeed, the skills that the Excelsiors had honed during one of the most intense periods of ballplaying ever attempted may have led to their overwhelming 23-4 victory over the Atlantics only a week after their return. 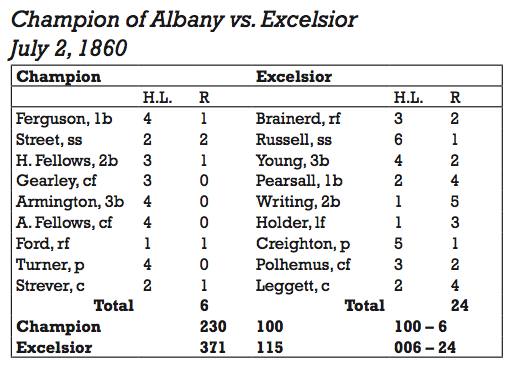 Excelsior of South Brooklyn vs. Champion of Albany, Victory of Troy, Niagara of Buffalo, Flour City of Rochester, Live Oak of Rochester, and Hudson River of Newburgh