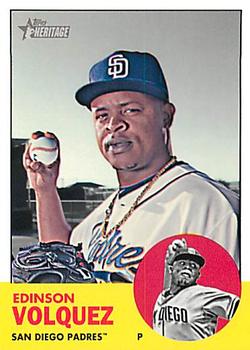 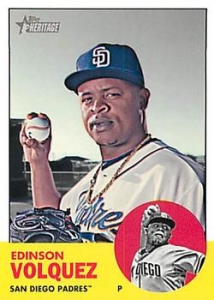 As of the start of the 2019 season, the San Diego Padres are the only existing major-league team that has not had a pitcher toss a no-hitter. While they have never had a no-no, the club has thrown 30 one-hitters.1 One of these one-hitters took place on Thursday, July 19, 2012, when journeyman Edinson Volquez held the Houston Astros to a single hit at Petco Park.

The Padres entered the game with a 38-55 record, 14 games behind the front-running San Francisco Giants in the NL West but having won four of their last five games. The Astros entered the game with a 34-58 record, 17½ games out of first in the NL Central Division and having lost 15 of their last 17 games. Houston was in the midst of one of its worst offensive funks of the season and its anemic offense had been victimized by Giants right-hander Matt Cain’s perfect game just over a month earlier.2

The right-handed-throwing Volquez had been acquired by the Padres in December of 2011 in a trade that sent Mat Latos to Cincinnati. Latos himself had come within a hit of throwing the Padres’ first-ever no-hitter in 2010 and had another one-hitter preserved by the bullpen during his rookie season in 2009. Volquez was making his 20th start of the season for the Padres and came into the game with a 5-7 record and a 3.61 ERA. He sported a career record of 5-0 against the visiting Astros. In his 109 career starts, he had never tossed a complete game; he had completed eight innings only three times.

The Astros sent rookie Lucas Harrell to the hill.3 Harrell entered the game with a record of 7-6 and a 4.43 ERA. The right-hander had enjoyed some success against the Padres in 2012. On June 27, a little more than three weeks earlier, he held the Padres to six hits and pitched the only shutout of his career, a 1-0 victory at Houston’s Minute Maid Park.

It was a perfect evening for baseball in San Diego for the 26,735 in attendance. The game-time temperature was 72 degrees and there was a gentle 7mph breeze toward right field. The third-base grandstand had begun to cast its shadow across the infield when Volquez delivered the game’s first pitch at 7:06 P.M.

The Padres jumped on Harrell quickly in their half of the first. Center fielder Alexi Amarista sliced a ball into the left-field corner for a leadoff double and scored what turned out to be the winning run when Logan Forsythe singled to right field. Harrell settled down and retired the next three Padres in order.

The Astros threatened to tie the game in the top of the second. Volquez walked left fielder J.D. Martinez to lead off the inning. First baseman Matt Downs hit a weak groundball to third baseman Chase Headley, whose errant throw allowed Martinez to advance to second. Justin Maxwell hit a sharp liner toward right field, but it was caught by the leaping Forsythe. The second baseman threw to shortstop Everth Cabrera to double up Martinez and Cabrera fired the ball to first but Downs dived safely back to the bag to avoid an inning-ending triple play. The inning ended with Jordan Schafer grounding out to second base.

Volquez worked a one-two-three third inning and retired the first two hitters in the top of the fourth before walking Martinez again. That brought up Downs, who hit a checked-swing dribbler past the mound toward shortstop that Volquez briefly had his hand on but couldn’t completely corral. The official scorer ruled it a base hit. Maxwell followed with a groundout to Yonder Alonso at first and the second and final Astros threat of the day was thwarted.

After the game, Volquez was asked how close he was to nabbing Downs’s roller. He grinned sheepishly, as if to suggest that he should have had the ball, and said, “I don’t want to talk about it. I’m going to have defensive drills tomorrow. I have to make that play.”4

Volquez continued to set down the Astros and allowed only one more runner, walking Gonzalez with one out in the top of the sixth inning. Harrell was equally impressive as he kept the Padres in check. He pitched seven strong innings (four hits, one walk, and six strikeouts) before being relieved by left-hander Wesley Wright, who stuck out two in a perfect eighth inning.

In previous outings, Volquez had struggled with his pitch count, and left the game earlier than both he and Padres manager Buddy Black would have liked. Only four times did he manage to complete seven innings. But on this day, Volquez’s pitch count was manageable, and he entered the ninth inning having thrown 103 pitches. Before the ninth, Black asked him what he had left. Volquez replied, “I got two strikeouts and a fly ball.” So he went back out to the mound to finish what he had started. He got Altuve on a fly ball to deep right-center, struck out Gonzalez, and retired Moore on a fly ball to deep center, ending the game 2 hours and 2 minutes after he had thrown the first pitch. Smiling, Volquez told sportswriters after the game that Black had needled him: “He’s like, ‘Hey, you only got one strikeout and two fly balls.’”5

The one-hit shutout was Volquez’s first complete game in the major leagues.6 He gave his batterymate much of the credit for his excellent command. “I got to give some credit to Yasmani Grandal, he did a pretty good job. We were working on the same page tonight and that gave me more confidence,” Volquez said.7 Grandal returned the praise, saying, “That was a lot of fun. One hit on a jam shot. … That should have been a no-hitter. Volquez came up and in on Downs and he got enough of it to make it a hard play.”8

Manager Black said he had considered bringing in closer Huston Street to pitch the ninth. Of Volquez’s gem, he said, “It’s an understatement to say it was a well-pitched game. Volquez was in command. He was in control of every pitch. Tonight was all Volquez. You could see the confidence in him from the first pitch to the last.”9

Volquez’s masterpiece was a rare pitching feat in the Padres’ first 45 years. It was their 26th one-hitter, their fifth 1-0 one-hitter, and the first since Latos beat the Giants with a 1-0 one hitter on May 13, 2010, in San Francisco. It was just the third complete-game shutout by a Padres pitcher at Petco Park, the first since Jake Peavy shut out the Astros 2-0 on August 23, 2005. The one-hit shutout at home was the first since Kevin Brown tossed a 4-0 one-hitter against the Milwaukee Brewers on August 16, 1998, at San Diego’s Qualcomm Stadium.

Five years after coming so close, Volquez attained the list of no-hit pitchers. On June 3, 2017, pitching for the Miami Marlins, he held the Arizona Diamondbacks hitless in a 3-0 win at Marlins Park.

3 Lucas Harrell entered the 2012 season with a career record of 1-2 in limited action with the Chicago White Sox and Houston Astros in 2010 and 2011.

6 As of Opening Day 2019, Volquez had four complete games. He missed all of the 2018 season after having Tommy John surgery.