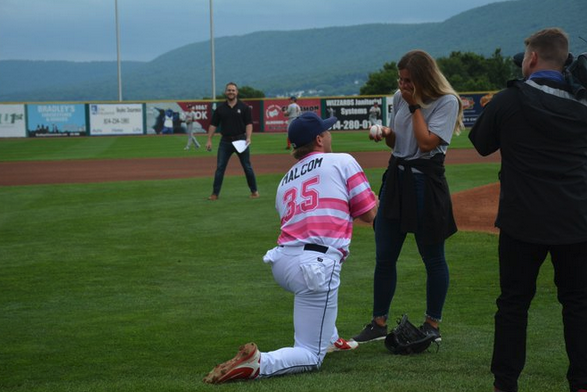 Before the State College (Pennsylvania) Spikes’ game of July 22, 2018, relief pitcher Cory Malcom made the pitch of his life. On the field, he asked his girlfriend, Kayla Turner, to marry him. She said yes.

Once the game began, Malcom found the visiting Auburn (New York) Doubledays to be a tougher audience. In an extra-innings relief outing, he surrendered two runs and the lead. But his teammates gave the 23-year-old righty an engagement gift. They scored three runs in the bottom of the 10th inning, helping Malcom to claim the rare double achievement of an engagement and a win on the same day.

The game, and the proposal, took place against the backdrop of the Pinckney Division1 – one of three divisions of the short-season Class A New York-Penn League. Going into the game, Auburn stood in second place at 18-15, 3 games behind first-place Mahoning Valley. State College was tied for fourth in the six-team division with a 13-21 record, 8½ games back.2

Auburn was affiliated with the Washington Nationals and State College with the St. Louis Cardinals. In keeping with the twenty-first-century minor-league trend of alternate jerseys, the Spikes turned out for the game wearing pink “tequila sunrise”-style tops, part of a “Paint the Park Pink” fundraising promotion with a local health foundation to fight breast cancer.3

Jerad Head, who played 10 games with the 2011 Cleveland Indians as well as eight minor-league seasons, was in his third season managing the Doubledays. The Spikes’ field leader was Joe Kruzel, a former college player and coach in his seventh season managing in the low minor leagues.

Ten members of the 2018 Doubledays have appeared in the majors as of October 2022,4 and four of them started in this game. Victor Robles led off and played center field; he already had 13 games of major-league experience with the 2017 Nationals and returned to the majors in subsequent seasons. Catcher Israel Pineda, who reached the majors in 2022, batted third. Right fielder Cody Wilson, who reached the big leagues in 2021, hit sixth. And César Vargas, who had reached the majors with San Diego in 2016, got the start. It was one of two games he pitched during a rehabilitation assignment with Auburn. A fifth big-leaguer, pitcher Aaron Barrett, appeared in relief. He too was in Auburn on rehab status following surgery to rebuild his elbow.5

As of October 2022, three members of the Spikes roster had made the major leagues – pitcher Angel Rondón, third baseman Brendan Donovan, and starting left fielder Lars Nootbaar. The start on the mound that night went to 24-year-old left-hander Jake Dahlberg, a 21st-round draft pick of the Cardinals in June 2017. In his second minor-league season, Dahlberg went 5-5 with a 2.50 ERA in 16 games between two Class A teams in 2018.

The night’s most memorable pitch belonged to Turner, who threw out the first ball with Malcom catching. Malcom walked to the mound and retrieved two items from his back pockets – first a baseball with “Will you marry me?” written on it, and then an engagement ring.6

Turner had been a soccer player at the University of Arkansas-Little Rock, where the couple met, and Malcom said that their shared athletic background made him think of proposing at the ballpark. “I wanted to do it in front of a lot of people because I think she deserves it, and she deserves the world, so I wanted to give it to her and give her that surprise,” the groom-to-be said later.7

In a timely pun, the game story on MiLB.com credited State College’s Dahlberg with “a gem” of his own – not a diamond ring, but an outstanding outing. Dahlberg worked seven shutout innings for the Spikes, scattering five hits and two walks while striking out eight. Game reports do not indicate any serious offensive threats against him. When he left the game, he had gone 16 innings without giving up an earned run and had whiffed 23 hitters in his previous 21 innings.8 Ace reliever Kevin Hamann, who led the team in saves with 10, worked two perfect innings, striking out two.9

Unfortunately for Dahlberg, State College’s offense could muster no threats against a succession of Auburn pitchers. Vargas allowed just one hit over three innings before departing, striking out two. Barrett and teammate Dave Smith split the next two innings, yielding one additional hit and one walk between them. And Jackson Stoeckinger, a lefty drafted in the 12th round in June 2017, followed with four innings of one-hit shutout ball. Stoeckinger also hit three batters and walked one. Through the regulation nine innings, Auburn had five hits and State College three in a scoreless tie.

Malcom had been given the night off in recognition of his special day, but when the game went into extra innings, manager Kruzel had to call on him for an unexpected appearance. Malcom entered with a handicap: The New York-Penn League, like other minor leagues in 2018, began each extra half-inning with a runner on second base to encourage offense. Shortstop Jose Sanchez’s second single of the game scored first baseman Jamori Blash,10 the “designated runner,” with the game’s first run.11 Third baseman Cole Daily followed with a double to score Sanchez.12 Malcom escaped the inning with no further damage, but the Spikes faced a 2-0 deficit going into their last turn at bat.

Ramirez retired shortstop Delvin Perez and designated hitter Stanley Espinal, sandwiched around an intentional walk to first baseman Brady Whalen.13 With two outs and the bases loaded, lefty-swinging left fielder Nootbaar, a rookie out of the University of Southern California, came to the plate. What happened next wasn’t exactly out of a Hollywood script, but it worked for State College. A pitch from Ramirez plunked Nootbaar on the rear end, forcing in pinch-runner Brandon Benson for a 3-2 win in front of 3,657 fans.14

Malcom earned the win, bringing his record to 2-0, while Ramirez took the loss to drop to 2-4. “It was an emotional roller-coaster most of the day, and they decided to put me in in the 10th inning to make it even more emotional,” Malcom said after the game. “I didn’t pitch the best, but we ended up winning and that’s all that matters.”15

Auburn closed the season in second place in the division, 1½ games back, with a 41-35 record. The team qualified for the first round of postseason play but lost to the Hudson Valley Renegades, a Tampa Bay Rays farm team and first-place finishers in the league’s McNamara Division. The Spikes finished out of the running with a 36-40 record, tied for third in the division, 6½ games back.

The season was Malcom’s second and last as a professional; he finished with a 3-1 record and 4.83 ERA in 27 games between two Class A teams. He was released in January 2019.16 The New York-Penn League was folded in December 2020 as part of Major League Baseball’s restructuring and streamlining of the minor leagues. However, Malcom and Turner’s connection outlasted both. The couple were married in May 2021.17

SHE SAID YES! #SCSpikes pitcher @corymalcom went down on one knee and proposed to his girlfriend Kayla before tonight's game, and now they're engaged!

Congrats to Cory and Kayla! pic.twitter.com/WfxcCT1ACF

Neither Baseball-Reference nor Retrosheet provides box scores of minor-league games, but the July 24, 2018, edition of the Centre Daily Times (State College, Pennsylvania) published a box score.

1 The three divisions used by the New York-Penn League in its last years were named for former league presidents Vincent McNamara, Leo Pinckney, and Robert Stedler.

4 Since the New York-Penn League was a low minor-league circuit, it’s possible that additional players from the two teams could still reach the majors as players, coaches, or managers.

6 As of April 2021, video of Cory Malcom’s proposal (and Kayla Turner’s acceptance) can be seen at the website of television station WTAJ (Altoona, Pennsylvania).

9 Malcom was second on the team with saves, with five. Hamann’s 10 saves also ranked him as the league’s leader, although his name oddly does not appear on Baseball-Reference’s chart of pitching leaders for the 2018 New York-Penn League.

11 Extrapolated from the box score. Blash was 0-for-3 with a walk, and Malcom did not walk anyone in his inning of work, so Blash could not have reached on a walk in the 10th inning.

13 Extrapolated from the box score published in the Centre Daily Times. Perez, Whalen, and Espinal hit between Dunn and Nootbaar, and the box score lists Ramirez as having intentionally walked Whalen.