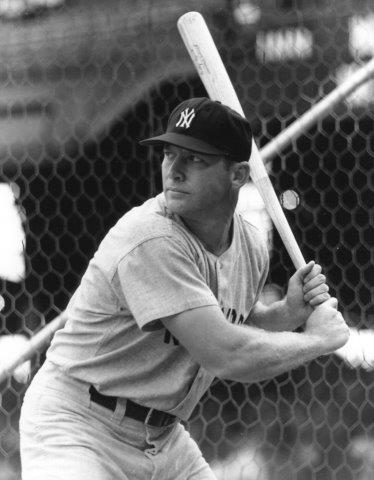 Switch-hitter Mickey Mantle banged out a single, double, triple, and home run, accomplishing the 12th cycle in New York Yankees history. His home run almost escaped Yankee Stadium and caused a tremendous roar by the crowd, but his triple with the bases loaded in the seventh inning was the decisive blow, leading the Yankees to a 10-6 victory over the Chicago White Sox.

The Yankees were red-hot, winners of 19 of their previous 24 games entering this contest (with one win against the White Sox). Over the same stretch, Chicago had gone 14-10, depositing them in second place, 4½ games behind New York. The Yankees sent Don Larsen against Chicago’s Bob Keegan. Both pitchers had winning records (5-2 for Larsen, 6-3 for Keegan), but Larsen, who pitched a perfect game in the previous year’s World Series, had been wild in his last outing, against Detroit, walking seven batters in less than six innings.

This was a seesaw contest. In the bottom of the first Mantle lifted a soft fly ball to center which Larry Doby lost in the twilight. The ball landed a few inches from Doby’s feet, and by then Mantle was cruising into second base with a fluke double. Harry Simpson followed with a home run to right-center, his eighth of the season.

With two outs in the bottom of the third inning, Mantle “lashed into a 3-1 pitch with the full force of his explosive power.”1 The ball landed in the next-to-last row of the center-field bleachers, just to the right of the scoreboard. According to the New York Times, “a hasty check of blueprints by Jim Thompson, the Stadium superintendent, indicated that Mantle’s drive had landed about 465 feet from home plate,”2 making the mammoth homer “a conversational item for the 42,422 fans at the Stadium.”3 Mantle himself claimed that the solo shot “was one of the hardest balls I’ve hit left-handed.”4 The headline in the next day’s New York Herald Tribune read, “His Homer Almost Out of Stadium.”5 The Yankees now had a 3-0 lead.

Larsen had a no-hitter going through 4⅓ innings, but he was again having difficulty with his control. After allowing six walks and two hits, Larsen left the game in the fifth with the Yankees leading, 3-1. Manager Casey Stengel brought in Tommy Byrne, who got Earl Torgeson to hit into a force out, but it also produced a second run charged to Larsen. New York added a solo run in the fifth. But in the sixth inning, Chicago sent 10 batters to the plate, capitalizing on the continued wildness of the Yankees’ pitchers. With two outs Byrne walked Les Moss, Sammy Esposito, and pinch-hitter Walt Dropo to load the bases. Stengel called to the bullpen for Art Ditmar with Ron Northey batting, and Ditmar completed a walk to Northey, driving in a run. (The walk was charged to Byrne, giving him four consecutive walks.6) Ditmar then served up singles to both Nellie Fox and Torgeson before walking Minnie Minoso. The rally ended when Doby forced out Minoso for the last out in the inning (Doby was 0-for-2 in the frame), but Chicago had captured the lead, 6-4.

The Yankees did not score in their half of the sixth, although Mantle, batting right-handed against new pitcher Paul LaPalme, did lead off with a single to center, his third hit of the game. He moved to second on a single by Simpson and stole third. However, the Yankees did not capitalize. Yogi Berra popped out to the White Sox third baseman Esposito in foul territory, and, with Dixie Howell now pitching, Mantle was doubled off the bag by a line drive off the bat of Hank Bauer right at Esposito.

An inning later, it was New York’s turn to score big; they put five runners across the plate on only three hits. Elston Howard led off with a triple off Howell and scored on a wild pitch. After Howell walked Jerry Coleman, left-hander Jack Harshman came on in relief as the fourth White Sox hurler of the game. The next three New York batters reached on two walks and a bunt single, which tied the game. Mantle stepped to the plate with the bases loaded.On the first pitch he saw, Mantle, batting right-handed, hit a “vicious liner”7 into the left-field corner that eluded Minoso’s grasp. The ball rattled around the outfield, and “Mantle legged his way to third.”8 The bases-clearing triple unknotted the tie game, and the Yankees led, 9-6.

Two singles around a sacrifice bunt led to another New York tally in the eighth, and Mantle came to the plate with Tony Kubek at second and Gil McDougald at first. This time he grounded out to the second baseman for the Yankees’ third out. The final score was New York 10, Chicago 6.

Ditmar was awarded his seventh win of the season and the victory improved New York’s record to 60-30; Chicago dropped to 54-35. Harshman took the loss. The Yankees had 15 hits in the game. The White Sox managed only six safeties, all singles, but the 13 walks issued by New York’s pitching staff kept the game close. Byrne had pitched 1⅓ innings for the Yankees, allowing four earned runs on no hits, but he did allow the four consecutive walks.9 The White Sox left 10 men on base.

Mantle became the first switch-hitter to hit for the cycle. His four runs batted in proved to be the margin of victory over the White Sox. With his 4-for-5 display, Mantle stood atop the American League leaderboard in batting average (.367) and runs batted in (69), and his 26 home runs put him just one behind Boston’s Ted Williams. Mantle’s OPS shot up to 1.236. The reigning American League Most Valuable Player convinced voters that he should (and did) win a second MVP Award. According to the Chicago Tribune, Mantle’s triple “climaxed one of the greatest games in the Oklahoman’s career.”10

This was the second and last cycle of the 1957 season. Lee Walls, left fielder for the Chicago Cubs, accomplished the rare feat on July 2, 1957, against the Cincinnati Redlegs. The next cycle would come two years later when Cincinnati’s Frank Robinson achieved it on May 2, 1959.

In addition to the sources mentioned in the Notes, the author consulted baseball-reference.com, mlb.com, retrosheet.org, and:

4 Andrew Mearns, “This Day in Yankees History: Mickey Mantle Cycles, Destroys a Baseball – July 23, 1957,” online at http://pinstripealley.com/2012/7/24/3177129/this-day-in-yankees-history-mickey-mantle-cycle-july-23-1957. NOTE: On May 22, 1963, batting left-handed, Mantle hit a ball that clipped the upper façade of the right-field stands, 108 feet above the level of the playing field, making it the closest that a ball has come to leaving Yankee Stadium. Mantle told reporters after that game, “It was the hardest ball I ever hit, but though I knew it would be well up there I didn’t think it would go out of the park.” See Michael Huber, “Mick Has (Almost) Left the Building,” Chance, Volume 23, Number 4, December 2010.

6 Unfortunately, the pitch count is not available from baseball-reference.com, and the newspaper accounts do not show it.