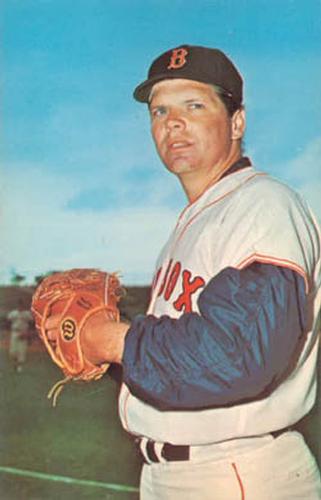 Having extended its winning streak to nine with an 8-5 win over Cleveland in the first game of a doubleheader on July 23, 1967, Boston looked to end its road trip with a sweep. Red Sox manager Dick Williams sent the struggling Gary Bell (6-9) to the mound; Bell, who had started the season with Cleveland, had not gotten out of the fifth inning in any of his four July starts, three of which he had lost. Indians skipper Joe Adcock countered with Luis Tiant (7-5), who had just one day of rest after starting and losing 6-2 to Boston on July 21.

At less than full strength, Tiant nevertheless started strongly, fanning Mike Andrews and Joe Foy. A single by Carl Yastrzemski brought up Tony Conigliaro, but he fouled out to strand Yaz.

Unlike Tiant, Bell got in immediate trouble. A double by Lee Maye, a wild pitch by Bell, and the first career sacrifice fly by Vern Fuller put Cleveland up 1-0 two batters into the home half of the first. Bell induced two more fly outs to escape additional damage.

Consecutive walks to George Scott and Jerry Adair gave Boston a promising beginning in the top of the second, but Reggie Smith failed to advance the runners when he fanned, and Tiant got infield popups from Mike Ryan and Gary Bell to preserve the narrow lead.

Neither team had another man on base until the top of the fourth. With one out, Scott reached on the 11th error of the season by Indians third baseman Max Alvis. Adair advanced Scott to second with a single, and Smith scored Scott with the tying run on another single. Both runners advanced on the throw from right field, so the Red Sox had men on second and third with one out. “On a pitch in the dirt, Adair tried to score and was thrown out, with Smith going to third base. After Ryan walked, the Indians went to sleep again,” a Boston scribe wrote.1 Before this game, Boston had played 91 times, and Ryan (1) and Smith (5) had combined for just six stolen bases. They each added to their totals with a shocking double steal (“on a play the Lynn English High School team of 1927 would have broken up,” according to one knight of the keyboard)2 that put the Red Sox up 2-1. Bell hit a comebacker to end the exciting inning, but Boston had taken a lead that it would not relinquish.

Bell retired 12 in a row after Maye’s double, and the Red Sox got two more runs in the top of the fifth. With one out, Yaz singled for his second hit of the game and Conigliaro hit his second homer of the day (he had homered in game one), 17th of the season, and the 101st of his career3 to put Boston up 4-1. Scott followed with a triple, but Adair fanned to end the inning.

Bell extended his streak to 15 in a row to close out the fifth, and Boston scored for the third straight inning in the top of the sixth thanks to a single by Smith and a double by Ryan to take a 5-1 lead. (The throw from the outfield retired Ryan trying to return to second after rounding the bag.)

Maye reached again with a single in the bottom of the sixth to snap Bell’s streak at 17 straight batters retired. Bell then hit Fuller to put two on with two out before retiring Rocky Colavito on a fly to left to squelch the threat.

Over the final three innings, the Red Sox would manage just two more singles (by Yastrzemski in the seventh and Ryan in the ninth); each time, a Boston batter (first Conigliaro, then Andrews) hit into a double play to end the inning.

The Indians had three hits over the final three frames. Fred Whitfield’s pinch-double with two outs in the eighth proved harmless. In the ninth Colavito singled with one out, and Alvis advanced him to second with a single, Cleveland’s fifth and final hit of the game, with two outs. Tony Horton came to bat with two on base and the tying run on deck. With a rested bullpen that did not work in the first game thanks to Jim Lonborg’s herculean 149-pitch complete-game effort,4 Williams stayed with Bell and got a result that rewarded his faith — a fly that Smith secured in center to extend the Red Sox’ streak to 10 games, the team’s longest since May 1951.5

While Cleveland general manager Gabe Paul blamed his team, blasting the bats of the Indians as ineffectual as “banana stalks,”6 Mike Ryan credited Bell for turning in a stellar start in favorable conditions: “Today he had pretty good stuff, though he had a little edge with the shadows the way they were.”7

The lateness of the hour after the doubleheader did nothing to diminish the enthusiasm of the energetic Boston faithful. Ecstatically, they came by the thousands to greet the team after its flight landed in Boston. “They told us on the plane that there’d be fans at the airport,” said Williams as he tried to push his way through the large crowd.8 Said a Massachusetts State Police officer: “It’s a good thing that plane didn’t taxi into the regular terminal. Someone might have been killed.”9 The raucous gathering sensed something special with this squad; after years of placid play, the rollicking 1967 Boston Red Sox would reward New England with an especially memorable baseball season.

6 Russell Schneider, “Bosox Sweep Tribe,” Cleveland Plain Dealer, July 24, 1967: 63. The White Sox would add a doubleheader sweep of Cleveland to extend the losing streak of the Indians to six games. Paul backed up his harsh words with a flurry of moves that included the trade on July 29 of Colavito back to the White Sox. “Indians Overhaul Roster, Bring Up Stan Williams,” The Sporting News, August 12, 1967: 11.