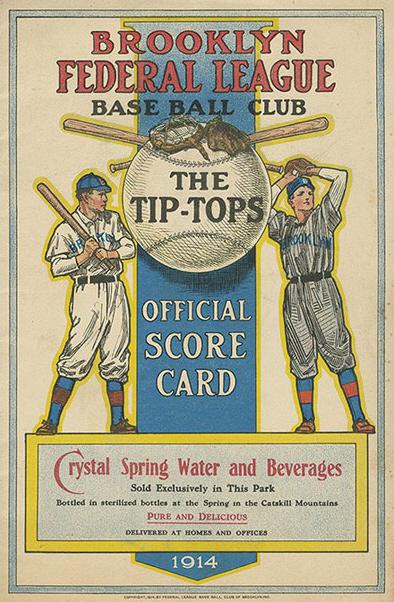 “Excellence may have many definitions, but Tip-Top Bread defines excellence: the supreme, clean, healthful loaf,” touted a 1914 newspaper advertisement.1 Robert B. Ward’s bakeries produced nearly 250 million loaves in 1913.2 Ward became a baseball magnate in 1914 when he acquired the Brooklyn franchise in the upstart Federal League. The team was named the Tip-Tops after his brand of bread, leading to criticism for the blatant commercial advertisement.3 The Federal League declared itself to be a major league in 1914, and posed a threat to the established American and National Leagues. “The major leagues ought to have organized a third league on their own initiative. But we caught them asleep at the switch,” said Ward.4

The Brooklyn Superbas of the National League left Washington Park after the 1912 season and moved to Ebbets Field. Ward invested $300,000 to build a ballpark at Washington Park for his Tip-Tops.5 There was little foul ground, by design, to bring the fans closer to the action.6 “We used the finest sod to be found on Long Island,” said John Montgomery Ward (no relation to Robert), who was the Tip-Tops’ business manager as well as a former baseball star.7

Sportswriter Heywood Broun said the new ballpark was in “Tip-Top” condition.8 It opened to great fanfare on May 11, 1914, as a crowd of 15,000 watched the home team lose to the Pittsburgh Rebels, 2-0. A large sign on the right-field wall encouraged gentility:

“Baseball players are all humans, and therefore love applause. If you want a winning team, root for them, speak well of them to your friends, and while we are here let us all be clean of speech – so that the ladies may find it pleasant to come often.”9

The Chicago Federals played the Tip-Tops in a five-game series at Washington Park, July 22-25, 1914. The teams split the first two games of the series. The third game, on Friday, July 24, drew a crowd of more than 2,500 on a comfortable afternoon, with the temperature in the mid-70s.10 Boys traversed the stands selling peanuts and lemonade.11

Chicago was in first place in the eight-team Federal League. The Tip-Tops, managed by Bill Bradley, were in fourth place, 4½ games behind the Chi-Feds, but were coming on strong, having won 18 of their last 22 games. Joe Tinker was the Chicago shortstop and manager, and the most famous player in the league; his jump from the National League gave the Federal League some credibility. Well-known outfielder Steve Evans left the St. Louis Cardinals to join the Tip-Tops and was hitting .375 for his new team.12 There were few other recognizable names in the game of July 24, because both teams lacked major-league experience. The starting pitchers were Max Fiske for the Chi-Feds and Ed Lafitte for the Tip-Tops, both right-handers. “This fellow Fiske has as good a spitball as I ever looked at,” said Tinker.13 “Doc” Lafitte worked as a dentist in the offseason; his pitching was “often wild and occasionally brilliant.”14

In the top of the first inning, Chicago got two men on base, by a walk and an error, but did not score. Claude Cooper, a 22-year-old outfielder, led off the bottom of the first by hitting a sharp grounder to Jack Farrell, Chicago’s 21-year-old second baseman. Farrell made “a pretty play … scooping the ball with one hand while tearing over at top speed, and throwing without straightening up.”15 He showed why people were calling him “the second Johnny Evers.”16 Brooklyn failed to score in the inning, despite Al Shaw’s double to the right-field wall.

With two outs in the top of the second inning, Farrell drew a walk and Fiske singled over second base. Austin Walsh, a 22-year-old outfielder making his first major-league start, followed with a clean single to center field, scoring Farrell with the first run of the game. Tinker followed with a long drive to left field and was robbed of a home run by Cooper’s spectacular catch. Brooklyn scored a run in the third inning, with singles from catcher Yip Owens and pitcher Lafitte. In the fourth inning, Shaw again doubled to the right-field wall but failed to score.

Chicago scored twice in the fifth, with a triple by catcher Art Wilson, a double by outfielder Dutch Zwilling, and a sacrifice fly by first baseman Fred Beck, to take a 3-1 lead. The Chi-Feds threatened again in the sixth by loading the bases but did not score. With two outs in the bottom of the sixth, Brooklyn first baseman Hap Myers tripled to left field, past Walsh. The speedy Myers had stolen 57 bases in 1913 for the Boston Braves of the National League. With Shaw, who had already doubled twice, at the plate, Myers foolishly tried to steal home off Fiske and was tagged out easily by Wilson for the third out. Myers “was so sore that he picked a fuss with Wilson … but umpires and players intervened and shooed the irate Myers to his job [at first base].”17 In the top of the seventh inning, two misplays by the Brooklyn defense handed Chicago another run.

Fiske was steady through six innings of work, allowing one run on five hits, but the Tip-Tops got to him in the bottom of the seventh. Shaw started the rally with a solo homer over the right-field wall.

“The wild burst of applause which greeted the wallop was tame compared to the fight which raged for possession of that selfsame ball by the swarm of kids outside the lot. The ultimate winner was minus his shirt and pretty badly bruised. But what is a shirt or two when a league ball is weighed in the balance?”18

Wilson muffed Steve Evans’s foul pop, and, given a second chance, Evans doubled to right field. Tex Wisterzil lifted a popup that fell between Tinker and Zwilling (either could have caught it but “neither did fearing a bump”19), and Evans scored. After Owens singled, Jim Delahanty pinch-hit for Lafitte and singled to left field, driving in Wisterzil with the tying run.

Both teams sent southpaws to the mound in the eighth inning, Doc Watson for Chicago and Rudy Sommers for Brooklyn. With the score tied 4-4, Solly Hofman drew a walk from Watson to lead off the bottom of the ninth. Wisterzil singled sharply to third baseman Harry Fritz, and Hofman held at second base. Al Halt advanced the runners with a sacrifice bunt, and Owens was walked intentionally to load the bases. With the game on the line and pitcher Sommers due up, manager Bradley sent utilityman Art Griggs to pinch-hit. The New York Sun reported what happened:

Griggs “hit the ball at Southpaw Watson with such force that the latter had no chance to get his hands in the way. It hit him so hard on the leg just above the knee that Watson limped off the field. The ball caromed away out in left field and Hofman crossed the plate with the winning run.”20

The final score was Brooklyn 5, Chicago 4. The winning pitcher was Sommers; the loser was Watson. The Chi-Feds left 12 men on base.

The Chicago Federals finished the 1914 season in second place, 1½ games behind the Indianapolis Hoosiers; the Brooklyn Tip-Tops finished in fifth, 11½ games back. The Federal League lasted one more season; in 1915 Tinker’s team was known as the Chicago Whales.21

Robert B. Ward died on October 18, 1915, at the age of 63.22 According to Brooklynballparks.com, Ward’s ballpark at Washington Park was used until the end of 1917 as a venue for “track and field, college and high school football, professional boxing, and even a visit from Buffalo Bill’s Wild West Show.” The stands were demolished in 1926. The Ward Baking Company lives on in the form of corporations descended from it, including the makers of Wonder Bread and Hostess products.