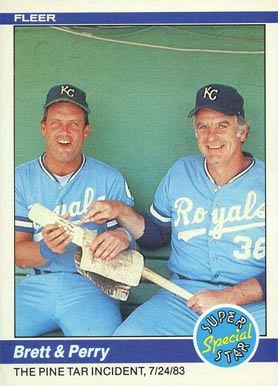 Shane Rawley for the Yankees and Bud Black for the Royals were the starting pitchers as the Royals and Yankees faced off before a Sunday crowd of 33,944 in the 12th and last game of their season series. The Yankees led the series six games to five. This was the fourth game of their series; the Yankees had won two of the first three. Both teams were in fourth place in their respective seven-team divisions: the Royals at 44-45 in the American League West, and the Yankees at 52-40 in the AL East.

Since Black threw left-handed, Yankees manager Billy Martin started Steve Balboni at first base in place of Don Mattingly, who had yet to establish himself as “Donny Baseball.”

Frank White drove in single runs for the Royals in the second and fourth innings, and Dave Winfield hit a bases-empty home run in the Yankees’ second. In the sixth inning, consecutive triples by Frank White and Don Slaught gave the Royals a 3-1 lead and Rawley was replaced by Dale Murray. Willie Wilson injured his shoulder diving for a pop fly in the third inning and was replaced by Pat Sheridan in center field. In the bottom of the sixth, designated hitter Don Baylor drove in two runs with a triple and Dave Winfield singled in a run to give the Yankees a 4-3 lead.1

The game was very ordinary until the fateful top of the ninth inning. Dale Murray was still pitching for the Yankees, seeking his second relief win in three games. He retired the first two Royals, but shortstop U.L. Washington, who up until this point had one hit in 17 at-bats in the series, singled to center. Billy Martin brought in closer Goose Gossage, who was in his 12th big-league season with a 2.05 ERA coming into the game. Over a 22-year career, Gossage amassed 310 saves and he was elected to the Hall of Fame in 2008.

The first batter Gossage faced was the formidable George Brett, who was batting .352 with 19 homers. Over the course of his career Brett exceeded 20 home runs in eight seasons playing in a pitcher’s park. He was elected to the Hall of Fame in 1999 with what was then the fourth-highest voting percentage in baseball history (98.2 percent).

Gossage was fearless and would not consider pitching around Brett to face Hal McRae. Brett hooked the first pitch, a fastball, hard but foul down the left-field line. He took the second pitch, another fastball which was too high. Brett tomahawked the third pitch and knocked it into the lower deck of the right-field stands for a two-run homer which gave the Royals a 5-4 lead.2

Pine tar is a sticky substance produced by high-temperature carbonization of pine wood that is used in commercial products like soaps and shampoos. Since baseball bats are slippery, players can apply up to 18 inches of pine tar to help them grip the bat.3 Brett’s use of the substance generated much controversy this game.

Coach Don Zimmer suspected that Brett’s bat had excessive pine tar under the major leagues’ Rule 1.10 (b) and advised Martin, who approached the umpires.

Rule 1.10 (b), Official Rules of Baseball, reads: “The bat handle, for not more than 18 inches from the end, may be covered or treated with any material (including pine tar) to improve the grip. Any such material, including pine tar, which extends past the 18-inch limitation, in the umpire’s judgment, shall cause the bat to be removed from the game. No such material shall improve the reaction or distance factor of the bat.”

The four umpires gathered and examined the bat, but did not measure it since they did not have a ruler or tape measure. They laid it across home plate (which measures 17 inches across) and determined that the pine tar exceeded 18 inches. Rookie umpire Tim McClelland, who was behind the plate in the game, invoked Rule 6.06 (d) and declared Brett out for using an illegal bat. Since that was the third out in the ninth, the game was over with the Yankees winning the game 4-3.

“A batter is out for illegal action when:

… “(d) He uses or attempts to use a bat that, in the umpire’s judgment, has been altered or tampered with in such a way to improve the distance factor or cause an unusual reaction on the baseball. This includes bats that are filled, flat surfaced, nailed, hollowed, grooved or covered with a substance such as paraffin, wax, etc. No advancement on the bases will be allowed and any out or outs made during a play shall stand. In addition to being called out, the player shall be ejected from the game and may be subject to additional penalties as determined by his League President.”

Seconds after McClelland announced the call, Brett bolted out of the dugout and charged the umpires. The entire incident, including the home run and the charge by Brett, can be seen on YouTube.4 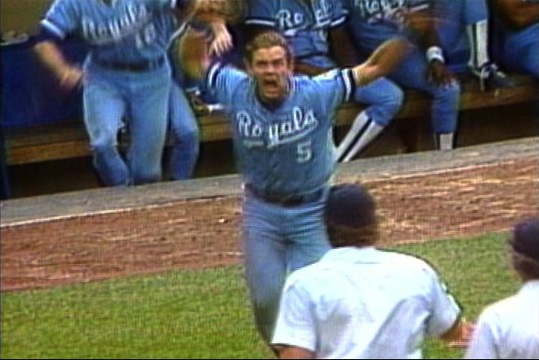 Dean Taylor, an assistant director of scouting development for the Royals, considered himself a rules buff. It was his opinion that pine tar did not improve the reaction or distance factor of the bat as stipulated in Rule 1.10 (b). He told Royals general manager John Schuerholz he thought the umpires had misapplied the rules. Schuerholz found an AL regulation that stated that the use of pine tar should not be considered doctoring the bat. The two wrote a three-page document protesting the game to American League President Lee MacPhail.5

MacPhail upheld the protest, stating, “It is not in accord with the intent or spirit of the rules and the rules do not provide that a hitter be called out for excessive use of pine tar.” This decision could not be appealed.6

There was now the issue of when the game could be resumed. August 18 seemed to be a good date since both teams were off and the Royals would be on the East Coast just before a series with the Baltimore Orioles. However, if the game was played on that date, the Yankees would have a stretch of 31 consecutive days with a game, in violation of their union contract. Donald Fehr, the chief counsel to the Players Association, acknowledged that the league could overturn the scheduling guidelines.

Martin and Yankees owner George Steinbrenner denounced the decision to complete the game. They cited security involved in opening to play possibly just one inning. They claimed that only a small contingent of the usual security force could be available that day. Steinbrenner recruited attorneys John Lang and Roy Cohn to fight the ruling. New York Supreme Court Justice Orest Maresca at 11:30 A.M. on August 18 issued an injunction against a resumption of the game, scheduled for 6 P.M. that day. But hours later Appellate Justice Joseph Sullivan ruled in favor of the AL, allowing the resumption of the ninth inning.

The Royals, annoyed by the Yankees’ tactics took a bus from Newark Airport and arrived at Yankee Stadium at 4:15 P.M. Brett had been ejected for his tirade against the umpires and wasn’t with the team. Manager Dick Howser and coach Rocky Colavito had also been banished for their role in the melee. The game resumed in the top of the ninth with the Royals leading, 5-4. George Frazier was now pitching with Ron Guidry in center field and Mattingly at second base. Martin ordered Frazier to throw to the bases to appeal Brett’s home run asserting that Brett or baserunner U.L. Washington had missed a base. Martin figured that since this was a different umpiring crew, they could not rule on the appeal. However, Bob Fishel, executive vice president of the American League, held an affidavit signed by the umpires at the July 24 game stating that Brett and Washington had touched all the bases.

Frazier struck out McCrae to end the top of the ninth. Dan Quisenberry took the mound for the Royals and retired the Yankees 1-2-3 to save the game.

It took less than 10 minutes to complete the game. Only 1,245 people attended, paying either $1.00 for a bleacher seat or $2.50 for a general admission ticket. Rainchecks from the July 24 game were honored. The Yankees estimated that playing the game cost them $25,000.7

In an interview 30 years after the game, Brett said he was proud of what he did (hitting a home run off a Hall of Fame pitcher) and that he did nothing wrong.8