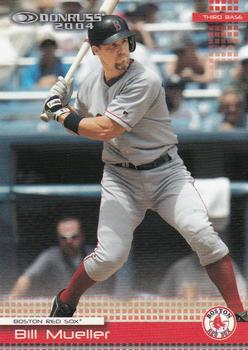 The Boston Red Sox had dropped a close 8-7 game to New York the night before, despite Kevin Millar’s three homers. This was more or less the same Yankees team that had beaten the Red Sox in Game Seven of the 2003 ALCS. This year it appeared they weren’t taking any chances; they had built up a 9½-game lead over the second-place Red Sox.

The scheduled 3:15 P.M. start of the game was delayed for an hour by rain, but finally the decision was made to play.2 Bronson Arroyo started for the Red Sox and Tanyon Sturtze for the Yankees. Both teams went down one-two-three in the first. In the top of the second, the Yankees scored twice on an Arroyo error while covering first base, a single, a double, and a groundout. The Red Sox went down in order again in their half of the second.

Then came the top of the third. Bernie Williams led off with a double to right field. Derek Jeter followed with a single to left, advancing Williams to third. Williams scored when Gary Sheffield grounded into a double play.

Then Alex Rodriguez was hit on the elbow by a pitch. He shouted at Arroyo. Catcher Jason Varitek moved aggressively on his pitcher’s behalf, shoving his glove into A-Rod’s face. A bench-clearing brawl erupted. Four players, including Varitek and Rodriguez, were ejected. Jorge Posada flied out, but it was 3-0, Yankees.

Kevin Millar singled and Bill Mueller doubled to lead off the Boston third. Both scored on groundouts, making it a 3-2 game.

In the bottom of the fourth, the Red Sox took the lead. Juan Padilla had replaced Sturtze to start the inning. (Sturtze’s finger had been hurt in the brawl.) David Ortiz walked, Manny Ramirez doubled, and Nomar Garciaparra singled to score them both. Though the Red Sox loaded the bases, they couldn’t bring in another run, the inning ending on a 1-2-3 double play and then a lineout to second base. Still, they had rallied to a 4-3 lead.

Neither team scored in the fifth, but Boston manager Terry Francona was ejected after arguing a play at second base.

The sixth inning was long and complicated. The Yankees scored six runs in the top of the inning to grab a 9-4 lead. Enrique Wilson (who had taken the ejected Rodriguez’s place) singled to lead off. Posada doubled and then Hideki Matsui doubled, giving New York a 5-4 lead. After two outs, Miguel Cairo singled (driving in Matsui) and Williams singled.

Brad Mills, managing in Francona’s absence, brought in reliever Curtis Leskanic. The new pitcher was ineffective; he walked both Jeter and Sheffield (forcing in a run), allowed Wilson’s two-run single, and then walked Posada. Mark Malaska took over and struck out Matsui, but New York now led 9-4. The half-inning had seen a total of five mound visits, two of them to change pitchers.

Garciaparra singled to lead off the bottom of the sixth and Trot Nixon walked. Manager Joe Torre replaced pitcher Padilla with Paul Quantrill. Millar had his third hit of the game, loading the bases. Mueller brought Garciaparra home with a sacrifice fly to center.

Second baseman Mark Bellhorn doubled off the wall in left, scoring two more. Johnny Damon singled in Millar. After Quantrill stuck out Doug Mirabelli, Felix Heredia was brought in to face the left-handed-hitting Ortiz, but walked him to reload the bases – and then walked Manny Ramirez to force in another run. Scott Proctor came in from the bullpen and struck out Garciaparra. It was 9-8, the Yankees holding onto a one-run lead.

The Yankees themselves had two mound visits and three pitching changes. The inning itself lasted 67 minutes and saw 22 batters face 89 pitches. Ten runs had scored.

Ruben Sierra homered to lead off the Yankees’ seventh, pushing the lead back to two runs. Mueller committed a throwing error. Then Millar made an error on a ball thrown to him at first base, and Garciaparra fumbled a ball at shortstop for three consecutive errors, which loaded the bases with nobody out. The misplay provoked Fox broadcaster Tim McCarver to exclaim, “This may be the worst game I’ve ever seen.” Colleague Joe Buck responded, “The best worst game” and McCarver agreed: “… the best worst game I’ve ever seen.” In all, the Red Sox committed four errors during the game. Both teams’ pitching staffs combined for eight walks, one hit batter, and one balk.

It wasn’t over yet. Now 10-8, Yankees, there was no more scoring until the bottom of the ninth – but there were three more pitching changes in the seventh and eighth. At last, ace closer Mariano Rivera was on the mound to close it out for New York. But Garciaparra doubled to left field and took third on Trot Nixon’s fly to right field, a ball held up by a strong wind. Millar singled – his fourth hit of the game after three home runs the night before – and Garciaparra scored.

Dave McCarty ran for Millar, hoping to become the tying run. That became academic when Bill Mueller, after working the count to 3-and-1 against Rivera, homered into the wind and into the Red Sox bullpen. The Red Sox had an 11-10 walk-off win.

The ejectees watching the game on TV in the Red Sox clubhouse were as elated as anyone else. Varitek said he jumped so high that his head almost hit the ceiling before he ran down the stairs, through the tunnel, and out onto the field to celebrate. Terry Francona ran out, too, only realizing after he reached the field that he was barefoot.3

The game as a whole was reasonably efficient, given the brawl and all, except for the 67-minute sixth inning, listed at 3:54.

Had Varitek just been trying to protect Arroyo when he intervened against Rodriguez? Selena Roberts, in the New York Times, thought it more likely that Varitek was trying “to inspire his listless mates,” though she admitted that “in innings 4 through 8, the Red Sox looked equal parts powerful and pathetic.”4

Nick Cafardo’s column in the next day’s Boston Sunday Globe was headlined, “Finally, They Show Signs of Life.” He wrote, “Beating Rivera was a bigger boost than the brawl, but the fracas stirred the emotions.5

“I don’t think you build on a fight,” Bill Mueller said. “You build on a win.”6 After the game, Alex Rodriguez said, “I think it’s going to take this rivalry to a new level. The intensity is something I’ve never really seen before.” Varitek said, “You lose your emotions sometimes. He lost his emotions, I lost mine. It’s not a good thing for our sport. You work on yourself for those things not to happen, but sometimes it happens. … I was just trying to protect Bronson. For protecting a teammate, I’ll take whatever comes.”7

“I think a fight always sparks you,” said Mark Bellhorn. “The commotion gets you fired up. It gets your adrenaline going.”8

If the Red Sox had needed evidence that they could stand up to, and defeat, the Yankees, this was the game often cited as perhaps having turned things around. Years later, pitcher Tim Wakefield said, “That might have lit a fire under us. It showed we weren’t going to be pushed around. A lot of us were tired of being mediocre, even though we were still in the hunt.”9

This was the season in which the Red Sox overcame a three-games-to-none deficit in the ALCS and then went on to win four straight – and sweep the Cardinals in the World Series, to end an 86-year-long drought and become world champions for the first time since 1918. As noted in a book celebrating the 2004 playoff run, “During the postseason, a number of reporters caught a glimpse of the screensaver on Jason Varitek’s laptop; it was the image of him sticking his mitt in A-Rod’s face. There’s little doubt that the confrontation provided some lasting inspiration for the team.”10

In addition to the sources cited in the Notes, the author relied on Retrosheet.org and Baseball-Reference.com

2 This was reportedly after a number of Red Sox players went into manager Terry Francona’s office and demanded the game; Retrosheet’s game play-by-play says that some Yankees had already showered and left the ballpark. Joe Torre had apparently told players the game was postponed and some had indeed left. See Tyler Kepner, “Smash Hits: Fighting, Then Yanks Are Knocked Out in 9th,” New York Times, July 25, 2004: SP5.