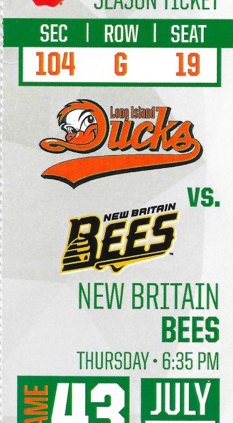 As the second decade of the twenty-first century neared its end, Major League Baseball began to look at possible rule changes, many driven by the fact that more and more games were taking three hours or more to complete. MLB signed an agreement with the Atlantic League in the spring of 2019 for the independent league to test out many of the changes under consideration.

Rules modifications implemented under the agreement included prohibiting infield shifts by requiring that two infielders be on each side of second base when a pitcher releases his pitch; requiring each pitcher to face at least three batters or complete the half-inning, unless injured; reducing the time between innings by 20 seconds; lengthening the distance between the mound and home plate to 62 feet 2 inches; and banning mound visits except for pitching changes or medical issues. As the changes were evaluated, MLB planned to consider implementing them in the majors.

Perhaps the most controversial change was the use of the Automated Ball-Strike System (ABS). ABS calls balls and strikes by utilizing radar technology. MLB’s press release announcing the Atlantic League’s ABS experiment asserted that it would “provide a reliable, precise, ‘rule-book’ strike zone for pitchers and hitters,” while allowing home-plate umpires to “use their judgment for limited ball-strike issues such as check swings.”1

Not all major-league umpires were thrilled about the automation initiative. MLB had used the TrackMan system to evaluate umpires since 2017. “It missed 500 pitches in April, and when I say it missed 500 pitches, that didn’t mean they called them wrong. They didn’t call them at all,” said veteran umpire Joe West.2

The Atlantic League rolled out the ABS on July 25 when the New Britain Bees visited the Long Island Ducks for an evening game.3 The temperature at game time was 79 degrees with an 8 mph breeze blowing in from left field. The system had been used in the league’s All-Star game earlier, on July 10. Its use was delayed for several weeks to allow the system to be installed in ballparks and train the umpires in the system.45

Ducks manager Wally Backman said he was ready for the experiment. “My whole thing is, let’s say just to throw numbers out there, if TrackMan is 98 percent right and the human is 92 percent right, then you have to use TrackMan because it makes the game better.”6

Darin Downs took the mound to start the game for the Ducks. He made it through the first inning, but New Britain jumped out to a one-run lead in the top of the second. Jared James led off the second with a single to extend his hitting streak to seven games. Two batters later, Rando Moreno hit a groundball that plated James, giving the Bees a one-run lead.

Long Island responded in the bottom of the third against Bees starter Jed Bradley. A fielder’s choice from Ezequiel Carrera and an RBI single to left field by D’Arby Myers brought home two runs. The Ducks went ahead 2-1 and never looked back.

The Ducks exploded in a four-run fourth inning to extend their lead to 6-1. Long Island went through the order against Bradley. John Apostolo drove in a run with a single, Then Carrera drew a bases-loaded walk and Myers plated two runs with a single.

Bees manager Mauro Gozzo kept Bradley in the game until the southpaw got in trouble again in the sixth. Bradley hit the showers after surrendering eight earned runs.

T.J. Rivera, looking to return to the majors after being released by the Mets in March, launched a three-run home run to left off reliever Anthony Alicki. Rivera’s blast, his second of the season, landed in the parking lot at Bethpage Ballpark. It expanded the Ducks advantage to eight runs, at 9-1.

Downs continued to shut down the Bees through seven innings. By the time Backman turned the game over to the bullpen, the left-hander had allowed just four hits and one walk, while striking out nine batters.

Mariel Checo and Clint Freeman each threw a scoreless inning of relief for Long Island to clinch the win. The victory raised the Ducks’ record to 49-34 for the season while the Bees fell to 40-42. The game time was 2 hours and 38 minutes. The box score showed that the ABS system was used for 279 pitches with 124 pitches being called balls. There were 11 walks during the game and 16 strikeouts.7

At the end of the game, the earpiece that home-plate umpire Fred DeJesus used to receive information was removed in a brief ceremony at home plate. It was announced that the earpiece would be sent to the Baseball Hall of Fame. The ceremony was the first time the 5,085 fans at Bethpage Ballpark knew they had just witnessed a piece of baseball history.

“I think it’s testimony to our players, our umpires, our coaches, everybody in the league,” said Atlantic League President Rick White afterward. “This is recognition of our contribution to the game. One of the reasons we made the agreement with MLB was to raise the profile of the Atlantic League. We’ve always been confident of our impact on the game with the number of players we send to the MLB. But this is another sign that we have a solid place in the game.”8

As part of its mission of promoting innovation, the league tweaked the rules after the game. Players, managers, and umpires have supported the use of TrackMan but expressed some concerns, especially over the size of the strike zone. Most umpires usually call a strike on pitches that graze the upper or lower edge of the strike zone, but the TrackMan system always registers them as strikes. This leads to strike calls on breaking balls that dive into the dirt just after they cross home plate or fastballs that appear neck-high when a batter stands in an athletic position.

Officials changed the computer program so that TrackMan would call a strike only when the entire ball is inside the upper boundary of the hitting area. “It made me feel good that they’re looking at it to get rid of those extreme calls,” said Somerset Patriots Manager Brett Jodie. “But from the players, there’s some hesitation with it. There’s some uneasiness because there are pitches that guys have been taking for years that have been balls and now they’re going to be strikes.”9

Not all players were ready to embrace the change. Ducks infielder L.J. Mazzilli, the son of former major leaguer Lee Mazzilli, echoed that sentiment. “You see the ‘K zone’ on TV in big league games, and that’s how you picture it when you’re playing, but sometimes it just looks a little different,” Mazzilli said. “If it’s perfected, then it’s no argument. Strike’s a strike, ball’s a ball. But there are different algorithms, depending on your height, where the box might be, and I think we have to see where it goes the rest of the year.”10

The experiment was just beginning but there seemed to be few players that night who were ready to argue with the system. “If it makes the game better and gets the game right, I think the players want the game right,” said Backman after the game. “I know the fans like to complain about calls just as much as I do, but if it makes it right, then it’s right. You can’t argue with a robot, right?”11

Although the Atlantic League’s 2020 season was wiped out by the pandemic, it was announced in the fall of 2020 that the league would continue to work with MLB to provide an experimenting arena for rules and equipment changes through the 2023 season.

The author attended this game with his family as part of a family reunion. His brother-in-law was honored during the game for his military service. They were not aware of the ABS system until the ceremony at home plate near the end of the game. As best as could be observed, no one in the stands could tell that it was being used.

3 The ABS system was used in two other games that night: one between the Sugar Land Seekers and the High Point Rockers, the other between the Somerset Patriots and Lancaster Barnstormers.

5 The league tested the ABS system prior to its official use in two games on July 12, 2019. One game was between the Somerset Patriots and the New Britain Bees. The other game was between the High Point Rockers and the York Revolution. Jacob Bogage, “Human Umpire Shows Solidarity with ‘Robo Ump’ After Coach Protests Electronic Strike Zone,” Washington Post, July 16, 2019.

7 According to MLB, while ABS was used during the game, the home-plate umpire several times did not receive the call in time or never received it at all. The umpire was also allowed to override any ABS calls he felt was off. As a result, there is no exact record of how many called strikes were done by ABS. The two New Britain pitchers had a total of 22 called strikes while the three Long Island Ducks pitchers had 21 called strikes. Doug Eppler, June 25, 2019 ABS Game Information, email message to Thomas Brown, March 22, 2021.