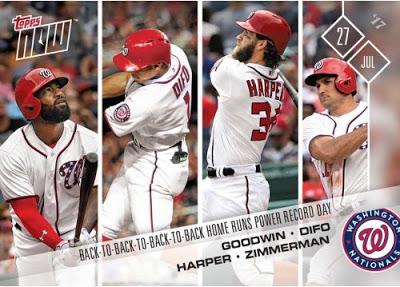 As students of physics know, a spinning baseball traveling through the air experiences three forces: gravity, drag, and lift. If baseball were played in a vacuum, that ball would experience only gravity and its destination would be uniquely determined by its initial conditions off the bat: speed, launch angle, and direction.1 Better carry of the batted ball can occur if the temperature is particularly high, resulting in lower air density, which in turn reduces drag.

As for the warm weather, it was a hot July 2017 in Washington. Temperatures reached at least 90 degrees on 19 of the first 26 days of the month.2 At the noon starting time for this game, the temperature was a warm 82 degrees going to a high of 86 with the wind blowing out to left field at 4 mph. Home-run hitting conditions? For whatever the reason, the crowd of 32,118 was about to witness a hitting display of unexpected proportions.

Having lost seven of their last eight games, the Milwaukee Brewers came into Washington for a three-game series with the Nationals with a slim half-game lead over the second-place Chicago Cubs in the National League Central Division race. On the other hand, the Nationals were up by 12½ games over the Atlanta Braves in the NL East Division. The Brewers got off to a great start in the first game when Zach Davies three-hit the Nationals over 7⅔ innings on the way to his 12th win of the season in an 8-0 Brewers victory. In the second game, the Nationals remained in a run-scoring funk until the seventh inning. They hadn’t scored in 17 consecutive innings until Daniel Murphy homered to cut the Brewers’ lead to 2-1. The floodgates opened in the eighth inning when the Nationals combined four doubles, two singles, and two walks for seven runs on their way to an 8-5 victory. The Brewers were knocked out of first place, to which they would not return for the remainder of the 2017 season.

For the deciding game of the series, the pitching match-up of the Nationals’ Max Scherzer (11-5, 2.26 ERA) versus the Brewers’ Michael Blazek (0-0, 0.00 ERA) had all the signs of a mismatch. Scherzer, a five-time All-Star selection, was the reigning Cy Young Award winner in the National League. Ironically, Scherzer gave up back-to-back-to-back solo home runs to David Peralta, A.J. Pollock, and Jake Lamb in the first inning of his previous start, at Arizona’s Chase Field on July 21. Blazek, a 35th-round selection by the St. Louis Cardinals in the 2007 amateur draft, was making the first start of his major-league career after 90 relief appearances with the Brewers since the beginning of the 2015 season.

The Nationals got off to a quick start in the first inning when Bryce Harper launched his 26th home run of the season to deep right field for a 2-0 lead. The home run enabled Harper to extend his hitting streak to 19 games, the longest of his career.3 Blazek seemed to settle down with four consecutive swinging strikeouts, but after he walked Scherzer to start the third inning, “the wheels fell off.”4

First, Brian Goodwin hit a two-run home run to deep right field and Wilmer Difo, Harper, and Ryan Zimmerman followed consecutively with solo homers. When Daniel Murphy flied out to deep left center for the first out, the partisan crowd playfully booed him, prompting Ryan Zimmerman to remark after the game, “Tough crowd.”5 Anthony Rendon followed with another home run, the fifth of the inning, and Blazek was done for the day, replaced by reliever Wily Peralta. He exited with dubious records of yielding a major-league-record five home runs in one inning, and being the ninth pitcher to give up six home runs in a game.6 The latter had last been accomplished by Tampa Bay pitcher James Shields on August 7, 2010, in a 17-11 loss at Toronto’s Rogers Centre.

With Peralta on the mound, the Nationals were not yet done. Adam Lind walked, stole second base, and scored on Jose Lobaton’s double for a 9-0 lead. For the Nationals, their four straight homers were accomplished for the eighth time in the major leagues and the first time for this franchise.7 The feat was last recorded by the Arizona Diamondbacks on August 11, 2010, at Miller Park against the Milwaukee Brewers. The Diamondbacks’ Adam LaRoche, Miguel Montero, Mark Reynolds, and Stephen Drew hit consecutive solo home runs off the Brewers’ Dave Bush in the top of the fourth inning of Arizona’s 8-2 victory.

The Brewers, who managed four hits all day, got the first of their two solo home runs in the fourth inning from Travis Shaw off Max Scherzer. Meanwhile, the bottom of the fourth inning was as devastating for Wily Peralta as the third inning was for Michael Blazek. Wilmer Difo lined a single to left and scored on Bryce Harper’s double to left. Ryan Zimmerman hit his second home run of the game, scoring Harper, and extending the lead to 12-1. For Zimmerman, the home run was the 237th of his career, tying him with Frank Howard for the most in Washington baseball history.8 A walk to Murphy and a double by Rendon set up Lind to get an RBI on a groundout to second base. When Lobaton cleared the bases with a two-run home run, the Nationals had a 15-1 lead, secured in large measure by eight home runs, all in the first four innings. The only scoring offense for the balance of the game came in the seventh inning when Lewis Brinson hit the Brewers’ other solo home run, off Enny Romero.

With the 15-2 victory in the books, the Nationals had their best record, 61-39, at the 100-game mark since the franchise moved to Washington. Scherzer had his 12th win of the season on his 33rd birthday. By striking out nine in six innings, he moved over the 200-strikeout mark for the sixth straight season, the longest streak among active starting pitchers.9 He was on his way to finish the season with 268 strikeouts, a 16-6 record and a second consecutive National League Cy Young Award.

As the Brewers left town, the Nationals were 13 games ahead in the National League East Division and the July 31 nonwaiver-trade deadline was only days away. The following day, they obtained second baseman-left fielder Howie Kendrick from the Phillies for a minor leaguer. They had clearly demonstrated an offense that was the most productive in the National League, but other roster moves were in order with pitching and the future of this season in mind. Just 11 days earlier, they had strengthened their bullpen by trading Blake Treinen and two minor leaguers to the Oakland Athletics for relievers Sean Doolittle and Ryan Madson. On trade-deadline day, they again strengthened their bullpen by trading another minor leaguer to the Minnesota Twins for relief pitcher Brandon Kintzler.

The Nationals tied a major-league record with five home runs in the third inning and Washington Post beat reporter Chelsea Janes didn’t mince words, calling it “one of the more remarkable offensive innings of the last decade.”10 Some great players like Tony Gwynn called hitting a baseball an art.11 Others like Ted Williams called it a science.12 For fans of the game, the great pleasure on this day was just sitting back and watching the baseball fly out of the ballpark, a good old-fashioned slugfest.13

This author had the perfect view from Section 206 of all those baseballs whose launch angles turned into home runs. Had I been watching on television or listening to the radio, perhaps I would have heard the broadcasters say that the ball is carrying well. From experience, they have developed an intuitive feel for how changes in atmospheric conditions affect the carry of a fly ball. Today it was all about the home run, back-to-back-to-back-to-back.

4 Paul Dickson, The Dickson Baseball Dictionary, 3rd Edition (New York: WW Norton & Company, 2009), 928: “Describing a situation in which a lead evaporated or the other team started to score many runs.”

13 Paul Dickson, 793: “A game characterized by one or both teams making many extra-base hits.” Numerous English dictionaries suggest that the term was first used in the early twentieth century for a boxing match dominated by the extended exchange of many powerful blows by one or both combatants.