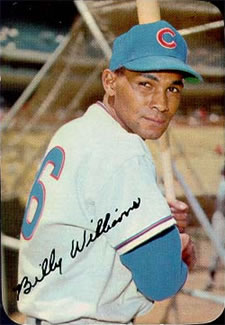 A small crowd headed to Wrigley Field in Chicago on Monday, July 28, 1969, to see their first-place Chicago Cubs take on the San Francisco Giants. The game’s attendance was small by the summer standard set by the first place team. Only 9,439 patrons attended, largely due to the fact that this contest was not on the original schedule. It was a makeup game after the May 10 affair between the two teams was postponed by rain. Skies cleared after an overnight rain as a comfortable temperature in the upper 60s descended upon the ballpark.

As often the case in baseball, one’s initial look at the starting pitchers for the game seemed to provide one team a decided advantage. In this case it was the visiting Giants with a seemingly commanding advantage since their starter was future Hall of Famer Juan Marichal. The Giant ace was in the midst of a run of great success against the Cubs. He had not lost to the Cubs for nearly three years and had not been defeated at Wrigley Field since September 1964, after which Marichal reeled off seven consecutive victories at the Cubs venerable ballpark. He entered the game with a sparkling 13-4 record in the midst of a season where he would end with a 21-11 mark and a 2.10 ERA while securing a berth on the All-Star team for the eighth season in a row. Using the modern metric of ERA+ which is a statistic that is adjusted the offensive environment in a pitcher’s ballpark, Marichal’s ERA+ was 168, just shy of the 169 he posted in 1965 (NOTE: 100 is considered to be the league average).

The Cubs starter that day was right-hander Bill Hands, in the midst of his finest season in the majors. Hands entered the game with an 11-8 record but would finish the year with 20 wins, an ERA of 2.49 and an ERA+ that nearly matched Marichal’s at 162. Additionally, by applying today’s Wins Above Replacement (WAR) statistic retroactively, Hands actually surpassed Marichal in this score for the 1969 season, 8.4 to 7.8.

The game was played amidst a controversy that was brewing in the Chicago media. This game was Cubs manager Leo Durocher’s first one back after he was absent for the Saturday and Sunday games against the Los Angeles Dodgers. Durocher impulsively decided to feign a stomach ailment during Saturday’s game and take a private jet up to northern Wisconsin were his new step-son was waiting for him for Parents Weekend at Camp Obijwa in Eagle River. After a rocky return flight in foggy weather on Sunday morning, Durocher decided to skip Sunday’s game as well, allowing Coach Pete Reiser to manage the team for the second straight day. Team doctor Jacob Suker announced to the media that Durocher was suffering from “gastritis” and that he would return to the bench the following day.1 Durocher did return on Monday, but by that time newspapermen such as Jimmy Enright of the Chicago Today publication were pressing to find the real story behind Durocher’s absence.

While the Chicago press was far more interested in the Durocher story, the fans who filed into Wrigley Field were focused on the game at hand — a contest which proved to be thrilling. Marichal and Hands mowed down their opposition through the first three innings, with Marichal giving up three hits in that time. Hands, however, took a no-hitter into the fifth.

The Cubs struck first with two fourth inning runs, courtesy of Ron Santo’s 22nd home run of the year that cut through a strong northerly wind,2 a two-run shot off of Marichal. Santo drove home Cubs left fielder Billy Williams, who had singled in front of him to keep a 17-game hitting streak alive.

Hal Lanier of the Giants broke up the Hands no-hitter with a single in the fifth, but the Giants would remain off the scoreboard until the eighth inning. That is when Bobby Bonds singled to left field and advanced to second on a ground out by pinch hitter Bob Burda. That set the stage for a two-run home run that was sent into the right field bleachers by Willie McCovey (his 31st of the year), tying the game at 2-2. Cubs manager Durocher, who had made a trip to the mound prior to McCovey’s at bat to warn Hands to keep the ball away from the powerful left-handed hitter, took the blame for the home run. “I should have walked him,” explained the Cubs skipper. “I was stupid. It was my mistake — not Hands.’”3

The game remained knotted as the teams headed to extra innings. Chicago had reliever Phil Regan on the mound as the tenth inning began. “The Vulture,” who was in his tenth major league season, had been an excellent asset out of the bullpen for the Cubs since coming over from Los Angeles early in the 1968 season. The trade, which also brought the Cubs outfielder Jim Hickman, proved to be lopsided in favor of the northsiders.

On this day though, Regan was ineffective. Three consecutive singles by Bobby Bonds, Ron Hunt, and Willie Mays chased Regan from the mound and the Giants took a 3-2 lead. San Francisco threatened to score even more in the inning as runners remained on first and second with nobody out. In came lanky left-hander Rich Nye, who had moved to a role primarily in relief in 1969 after starting 50 games the previous two seasons. Nye retired McCovey on a fly ball to center, but gave up an infield hit to Dick Dietz. That loaded the bases with only one out, but Nye induced the following hitter, left fielder Ken Henderson, to ground into a double play.

Things looked bleak for the Cubs in the bottom of the tenth inning. Marichal remained in the game and seemed poised to pick up an extra inning victory. Substitutes Jimmy Qualls and Bill Heath were retired on fly balls. But Heath was the last man the Giants hurler would retire. Though down to their last out, the Cubs were not yet finished. Pinch hitter Willie Smith, the opening day hero for Chicago, drew a walk on a 3-2 pitch. Nate Oliver ran for Smith as leadoff hitter Don Kessinger singled. Glenn Beckert singled to left, scoring Oliver. Billy Williams brought the winning run home with a sharp hit just above the outstretched hand of Giants first baseman Willie McCovey. The Cubs had earned an improbable victory.

Aging Cubs star Ernie Banks, who regularly shared insights about the events of games in the Chicago Tribune, called the game the “greatest victory of the season.” Noted Mr. Cub, “To beat Juan Marichal in a come-from-behind game has to be one of the toughest jobs for any team.” Banks added, “What a psychological lift this will give us!”4

The Cubs had every reason to be happy as evening fell. They had beaten one of their toughest pitching opponents. Their lead over the second place New York Mets was now a full five games. While there was some uncertainty as to the fallout of Leo Durocher’s absence from the team the previous days (Durocher was set to meet with owner Phillip Wrigley the next day), Chicago seemed to be poised for continued success as August of 1969 neared.

As a lifelong Cubs fan, this game is special to me since it was the first Cubs game I ever attended in person.