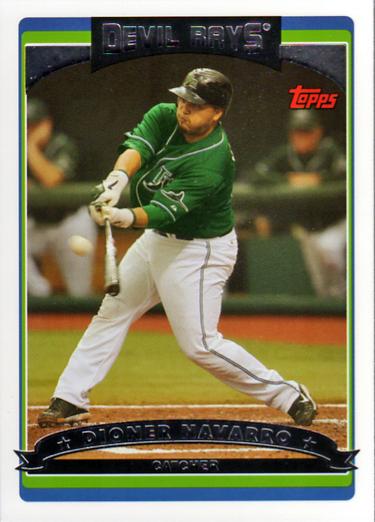 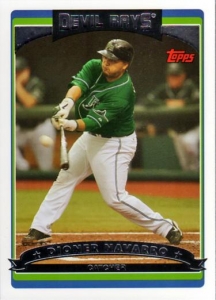 The pitching matchup looked favorable: Randy “Big Unit” Johnson (11-8, 4.80 ERA) was on the hill. True, his best years were behind him, but the pitcher who had earned every award and every superlative in the baseball lexicon was still a force to be respected. Although he had suffered some meltdowns earlier in the year, his last four starts had been solid.1 The opposing pitcher, Jae Weong Seo (2-9, 5.71 ERA), had appeared as a starter and reliever in 2006, traded from the Dodgers in June as part of a multi-player deal. He was still looking for his first win for the Devil Rays.

Johnson’s first inning looked like classic Johnson: three outs on 10 pitches. Seo took the mound for the home half of the first, which looked like classic Yankees. Johnny Damon grounded out to first, but Derek Jeter and Jason Giambi both followed with homers to give the Yankees an early 2-0 lead. Álex Rodríguez struck out, but Jorge Posada worked an eight-pitch walk. On Seo’s sixth pitch to Bernie Williams, Posada stole second, but Williams flied out to leave him there. Seo was already at 30 pitches for just the first inning.

The top of the second inning started out like the first: Ty Wigginton and Jorge Cantú flied out to center on a total of five pitches. But Jonny Gomes walked on five pitches (not unusual: Johnson had been walking more than a batter per game in 2006, including three games with four or more walks). He might have been out of the inning on the next play, but center fielder Damon had Damon Hollins’ fly pop out of his glove: error to Damon, Hollins to second, and Gomes to third. That error seemed to open the door for yet another Johnson meltdown.2 Dioner Navarro singled, scoring Gomes. Johnson got two strikes on Tomás Pérez but he hit the third pitch for a double. That scored Hollins and Navarro, giving the Devil Rays a 3-2 lead (although all the runs were unearned). Julio Lugo walked, but Johnson finally ended the threat by getting Carl Crawford to fly out to left.

Seo also got two quick outs in the bottom of the second followed by a Miguel Cairo single. Cairo stole second but Damon flied out to leave him there.

Rocco Baldelli grounded out to start the third inning. Wigginton doubled, then went to third on Cantú’s fly to center. Gomes walked, although it took eight pitches. Hollins ended his 0-for-20 slump by hitting a three-run homer. Navarro ended the inning by grounding out to short, leaving the score at 6-2, Devil Rays.

The Yankees got two back in the bottom of the third. After Giambi walked, Rodríguez singled, moving Giambi to third. Posada doubled down the right-field line, scoring Giambi and Rodríguez. Williams singled so there were runners first and third with only one out. The Yankees could not capitalize: Andy Phillips was out on a foul pop on the first pitch and Melky Cabrera grounded out to second. The Yankees had pulled within two – but that was as close as they’d get.

Pérez doubled on Johnson’s first pitch of the fourth, then moved to third on Lugo’s sacrifice. Johnson then seemed to lose control pitching to Crawford: three straight balls and then hit him with the fourth pitch. Baldelli singled on the next pitch, scoring Pérez. Joe Torre could see how frustrated Johnson was at losing control and pulled him.3 It matched Johnson’s shortest outing of the year.4 Shawn Chacon was not the panacea Torre had hoped for: It was more like a series of unfortunate events. Chacon hit Wigginton5 to load the bases, walked Crawford (walking in a run), got Gomes to strike out, allowed a two-run-scoring single to Hollins, and finally ended the half-inning by striking out Navarro. The score was now 10-4, Devil Rays.

Seo continued his effective outing in the home half of the fourth. Although he allowed a single to Damon, he was erased when Jeter grounded into a double play.

Pérez led off again in the top of the fifth by hitting his third double. For a .194 hitter, he was having quite a day. Lugo followed with a single to the shortstop, allowing Pérez to take third on the throw to first. Crawford then sacrificed him home, padding the Devil Rays’ lead. Chacon got two fly outs to limit the damage. All Seo allowed in the bottom of the fifth was a Rodríguez single.

Cantú hit the first pitch of the sixth out of the park but Chacon got three fly outs to wrap up the visitors’ half of the sixth with the score 12-4, Devil Rays. Seo had earned his first win in a Devil Rays uniform.6 He left at 103 pitches, having allowed a Cabrera single between two outs. Jon Switzer took over and gave up back-to-back singles to Damon and Jeter, scoring Cabrera. Giambi walked, but Rodríguez grounded into a force at second to end the inning with the score 12-5, Devil Rays.

A review of the top of the seventh brings the phrase to mind “some days you’re the windshield, some days you’re the bug.” Any hope of a late-inning Yankees comeback was thoroughly obliterated by the nine Devil Ray batters who came to the plate. Pérez again led off the inning, getting a single for his fourth hit of the day. After Chacon walked Lugo on nine pitches, Torre decided a change of pitcher was in order.7 Mike Myers proceeded to allow five runs to score, including two inherited runners, without recording an out (he also doubled his ERA from 1.50 to 3.00). T.J. Beam, the third pitcher of the inning, finally got the first out by striking out Cantú. Any relief that might have been felt in the dugout or stands evaporated when Gomes hit the next pitch for a home run, bringing the score to 18-5, Devil Rays. Beam managed to record the next two outs to end the parade of Devil Rays around the bases.8

The Yankees accomplished nothing in the bottom of the seventh except getting through the inning uninjured: three outs on 14 pitches.

Perhaps seeing the game out of hand, Torre replaced three veterans in the eighth: Rodríguez, Jeter, and Damon, although Beam continued pitching. In a case of déjà vu all over again, Pérez led off the top of the eighth … and doubled. It was his fifth hit of the game and fourth double, setting a personal and franchise record.9 Lugo singled, and Pérez scored on catcher Sal Fasano’s throwing error. Lugo made it to second on the error, and to third on Crawford’s groundout, but he was left there when pinch-hitter Russell Branyan struck out and Lee flied out. That 19th run finished the Devil Rays’ offensive onslaught, tying the team record, set in Toronto on June 24, 2004.10

Shawn Camp pitched the home half of the eighth for the Devil Rays. Unlike the previous Shawn, he had no trouble: three outs on 10 pitches.

Ron Villone, the Yankees set-up man, faced the middle of the Devil Rays’ order in the top of the ninth. He managed a 1-2-3 inning, only the second such inning for the Yankees. Edwin Jackson came on to close out the game for the Devil Rays. The Yankees did not go quietly. Nick Green, who had been substituted for Jeter in the eighth, opened with a double to left then made it to third on a passed ball. After Giambi struck out, Green was able to score on Aaron Guiel’s groundout to second. Fasano flied out to center to end the game with the score 19-6, Devil Rays.

Johnson stabilized somewhat through the rest of the season, accumulating six wins and two losses, but finished the year with a 5.00 ERA, the highest season ERA of his career. His overall performance stats hid significant variations, leading his manager to question how he would perform in the postseason.11

For the Devil Rays, the 2006 season ended with them at the bottom of the AL East. But at least Johnson gave them a chance to beat the Yankees: two of their five wins against their division rival came at his expense.12 Tomás Pérez had a career day: In his 12-year career he had only one five-hit game, and this was it.

2 McCarron, “A Big Problem: Rays Rough Up Randy in Rout.”

3 McCarron, “A Big Problem: Rays Rough Up Randy in Rout.”

6 Seo had been traded from the Dodgers on June 27, and had accumulated five losses since the trade. This was also his only win in a Devil Rays uniform in 2006.

7 “Change of pitcher” didn’t just refer to this game: Chacon and his 7.00 ERA were traded to the Pirates two days later. He never made another appearance for the Yankees.

11 Anthony McCarron, “Big Unit’s Shot to Be Ace Takes a Beating,” New York Daily News, September 24, 2006: 62. Torre was right to be worried: Johnson gave up five runs in 5⅔ innings, and took the loss in his final postseason outing.