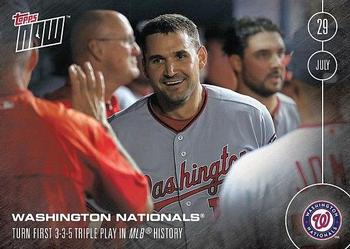 The visiting Nationals and the Giants had comparable win-loss records starting their four-game series in San Francisco the previous day. The Nationals had won the first game so the Giants were looking to even up the series. They were still leading the National League West by two games, but they were nervously scoreboard-watching as their rival Dodgers had a much better record since the All-Star break.1 The Giants had managed only two wins since then but the Dodgers had six. The Nationals had a more comfortable five-game lead in the National League East. The evening was a typical San Francisco summer night: 61 degrees and breezy. Hoodies and knit caps were the order of the day in the stands and the dugouts.

The first inning opened with Ben Revere facing Jeff Samardzija (9-6, 4.22 ERA): Revere flied out to former Twins teammate Denard Span, who just missed a collision with left fielder Ángel Pagán. Bryce Harper, the reigning National League MVP, was up next. He had been in a pronounced slump since the All-Star break, batting only .114. He did not improve that statistic by lining out to Brandon Belt at first. Daniel Murphy, although leading the league in hitting, grounded out to Belt as well on the first pitch. A very efficient inning for Samardzija: six pitches for three outs. Max Scherzer (10-6, 2.92 ERA) took the hill for the Nationals. His career record against the Giants was not good (1-4, 6.85 ERA). Although not as efficient as Samardzija, he faced the minimum: Span flied out, Pagán walked, but Joe Panik grounded into a double play to end the inning. Panik had returned from a month on the DL the day before.

Samardzija made quick work of Wilson Ramos to open the second: he struck out on three pitches. Jayson Werth walked, then advanced to second on a Clint Robinson sacrifice, but was stranded there when Anthony Rendon grounded out to end the half inning. In the home half of the second, Brandon Crawford grounded out and Belt lined out to Murphy. But Scherzer did not escape the inning unscathed: Conor Gillaspie doubled to Werth in left, then came around to score on Grégor Blanco’s single. Blanco stole second with Trevor Brown at the plate, but was left on base when Brown flied out to center.

All the Nationals accomplished in the top of the third was Revere’s walk: Harper further lowered his average with another groundout. Scherzer struck out his counterpart on three pitches, then Span bounced a single off the first-base bag with Harper chasing the ball in right field. Pagán doubled into right-center, moving Span to third. But the rally died when Panik popped out to shallow left and Crawford grounded to Robinson at first.

The Nationals got on the board in the fourth. After Murphy flied out to left, Ramos hit one into “triples alley” but given his speed (or lack thereof), he made it safely to second. Werth then singled to right to score Ramos. The throw-in from Blanco missed the cutoff man so Ramos had plenty of time to chug home. Fly outs for Robinson and Rendon left the score tied, 1-1. In the bottom of the frame Belt flied out to center followed by a Gillaspie base hit. Blanco, who was 6-for-11 plus a walk against Scherzer, went down swinging on three pitches. Brown followed by striking out swinging at a pitch in the dirt.

In the top of the fifth, Wilmer Difo stepped in to face Samardzija. Perhaps the ball just slipped, or perhaps Samardzija was welcoming Difo back to the big leagues, but he knocked him down with a pitch almost in his ear. Difo responded by getting up and hitting a double for his first career extra-base hit.2 Scherzer advanced him to third with a bunt up the third-base line. Revere’s base hit scored Difo. Revere stole second with no throw as the catcher dropped the ball. Harper flied out, but Murphy bounced one off the center-field wall for a triple, scoring Revere. Ramos grounded out to end the half inning with the score 3-1, Nationals. In the bottom of the inning, Scherzer struck out Samardzija again on three pitches, then got two lineouts to end the inning.

Werth opened the sixth with a double off the left-field wall. He advanced to third on Robinson’s single, then scored on Rendon’s single over the mound. At this point Matt Reynolds headed to the on-field bullpen mounds on the third-base side to start warming for the Giants. Rendon stole second with Difo at the plate. Difo grounded out, advancing Rendon to third. Scherzer struck out, leaving Rendon on base and the score 4-1, Nationals. In the bottom of the sixth, Panik fouled out to Rendon, who managed to hang on to the ball as he was tripped up by Difo in the on-field bullpens by third base. This was the first time Difo had played in this ballpark, so that may have contributed to the collision. Luckily, no one was hurt. Crawford struck out, then Belt made a bid for a home run but Revere caught it almost at the wall.

In the top of the seventh, Reynolds made his Giants debut, relieving Samardzija. He faced Revere, who popped out to shallow left. After Reynolds walked Harper, he threw a wild pitch to Trea Turner (in for Murphy) that allowed Harper to take second. Turner grounded out, advancing Harper to third. There was a minor delay of game for two reasons: A fan had to be removed from the field, and Giants manager Bruce Bochy brought in Hunter Strickland to relieve Reynolds (apparently for a righty-righty matchup). Ramos hit a grounder into right but Strickland covered first just in time to get the not-so-speedy Ramos to end the half inning. In the bottom of the seventh, Scherzer finally managed to retire Gillaspie, on a broken-bat grounder. After Scherzer walked Blanco, Nationals manager Dusty Baker sent Blake Trienen and Oliver “Ollie” Pérez out to warm up on the first-base side bullpen mounds. But Scherzer finished the inning: Brown was Scherzer’s sixth strikeout, and pinch-hitter Ramiro Peña flied out to center.

Derek Law made quick work of the Nationals: three outs on eight pitches. In the bottom of the eighth, Perez faced Span, who bunted and beat the throw to first. He tumbled over the bag, was visited by the trainer, but stayed in. Pagan blooped a base hit into no-man’s land in shallow left.  When Buster Posey came up to pinch-hit, Baker substituted Trienen (since Posey was 0-for-6 against Trienen). Trienen threw two beautiful curves for strikes, then four straight balls in the dirt, loading the bases with no one out. Baker did a triple-switch: Sammy Solís in to pitch, Ryan Zimmerman to play first, and Danny Espinosa to play shortstop.

Of course, the crowd was cheering: bases loaded, no outs. On Solís’s second pitch, Crawford lined to Zimmerman, who caught the ball a few inches above the dirt. He stepped on first, catching Posey well off the bag for the second out. Span had run for home thinking the ball had bounced: Once Zimmerman looked over and realized Rendon was alone on third, smiling and waving for the ball, he tossed it over for the third out.

This was the first, and as of 2018 only 3-3-5 triple play in major-league history, and the first triple play in Nationals history. Rendon nonchalantly threw the ball into the stunned crowd and headed for the dugout. Baker was the opposite of nonchalant: He danced his way down the dugout high-fiving everyone in sight. After 40 years in baseball, he finally got to see a triple play.3 Span, standing at home plate, realized what had happened when he asked the home-plate umpire “He caught that?” and received the bad news. The ballpark went very, very quiet.

The Nationals faced Sergio Romo in the top of the ninth. Although Espinosa got a base hit, he was erased when Zimmerman grounded into a double play. Revere grounded out. Baker chose Felipe Rivero4 to close the game. He got two quick outs, but then gave up a hit to Blanco. Baker brought in Shawn Kelley to pitch to Brown but he gave up a hit, advancing Blanco to third. Eduardo Núñez stepped in to take his first at-bat as a Giant: he had arrived in a trade from the Twins the previous day. The crowd put their rally caps on again, but Núñez struck out swinging to end the game with the score still 4-1, Nationals. The Giants’ fans would not have been happy with the loss, but at least they witnessed a unique triple play.

youtube.com/watch?v=0G2kzgVtTIo  (Notice that the game is labeled July 30. The previous night’s game is also misdated.)

1 They were right to be worried. The Giants finished four games back of the Dodgers in the division, although they did win the wild-card game, only to lose to the Cubs in the NL Division Series.

2 This was Difo’s first major-league game in 2016. He had been up briefly in 2015. This was only his third major-league hit, although he had been hitting .255 at Double A when he was called up.

4 In 2018 Felipe changed his last name to Vázquez to match his sister’s name. His professional records are listed under Felipe Vázquez. Elizabeth Bloom, post-gazette.com/sports/pirates/2018/04/09/felipe-rivero-name-change-prescilla-vazquez-sister-pirates-closer/stories/201804090160.