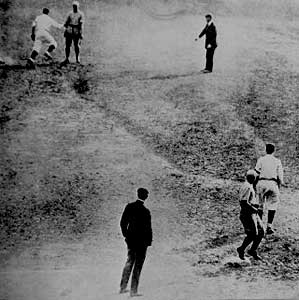 Welcome to the SABR Triple Plays Database, a comprehensive list of all triple plays turned in the major leagues since 1876.

Click the link below to find a list of all known triple plays in major-league history, sortable by date, team(s), runners on base, play sequence, fielders, pitchers, opposing batter, unassisted, end of game, and other categories.

Triple Play trivia nuggets: Click here for some fun facts about triple plays courtesy of Chuck Rosciam, including the story of a triple play where the ball changed hands 10 times, the only player to be put out in a triple play twice in one season for two different teams, a reliever who threw only one pitch to get three outs, and the only team to turn two triple plays in the same game.

History of the SABR Triple Plays Database: The triple play list was developed by Chuck Rosciam and Frank Hamilton as conceived by David Smith. Over the years, the list has been updated and corrected by many volunteer researchers since and digitized in its current format by members of the Baseball Records Committee, including Sean Lahman, Frank Hamilton, Chuck Rosciam, Frank Vaccaro, and Jacob Pomrenke. A list of known contributors is below.

Corrections or updates: SABR members are invited to help fill in any missing or incorrect data. Please contact Sean Lahman or Jacob Pomrenke.