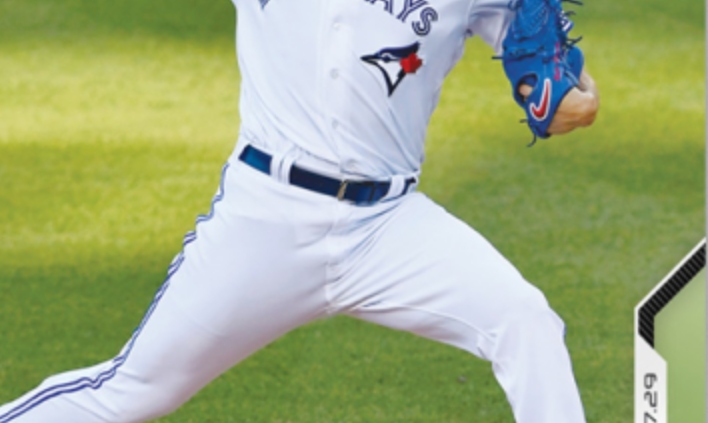 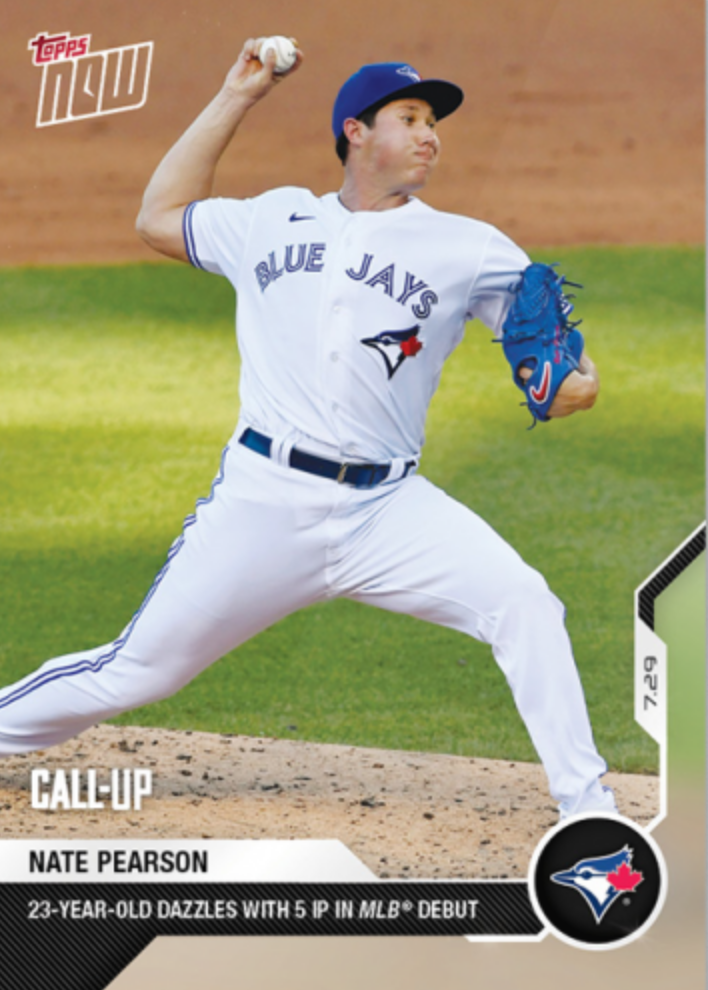 Maybe “Homeless” Opener would be a better description for this game. The Toronto Blue Jays (3-2) were unable to play in Canada in 2020 due to the COVID-19 border protocols. They had migrated south to Buffalo, New York, but their temporary home there, Sahlen Field, was not yet ready in time for their scheduled home opener on July 29.

The original schedule had the Jays and the Nationals (1-4) playing two games in Washington followed by two games in Buffalo. Treating the Jays as the home team in Nationals Stadium for the second two games was a logical alternative. The Nationals’ stadium announcers contacted their counterparts in Toronto for video and audio clips, including players’ walk-up music, that would make it feel more like a Toronto home game.

Both countries’ anthems were played before the game. The only fans seeing it live were a lucky few with apartments or condos by the ballpark. The only people allowed in the stands were the grounds crew, coaches, and pitchers who would not be pitching that day. Typically those pitchers would be in the dugout with their teammates, perhaps charting pitches. But in 2020 social-distancing protocols required them to sit in the stands. Among the observers was Tanner Roark, a former National who had earned his first win of 2020 by beating Washington the previous night. The 6:05 P.M. start1 meant that the ballpark shadows fell on the infield at the beginning of the game, giving an advantage to the pitchers.

Toronto’s Nate Pearson made his long-awaited major-league debut. He started out on the right foot: The Nationals’ leadoff hitter, Trea Turner, was his first strikeout. (Yes, he got the ball.) He followed that with a four-pitch walk of Adam Eaton, who promptly stole second. Eaton was left there when Asdrúbal Cabrera grounded to first and Eric Thames flied out.

The Nationals ace Max Scherzer took the mound. Teoscar Hernández earned a leadoff walk to the cheers of the electronic crowd.2 But the ersatz rooters were silenced when Cavan Biggio grounded into a double play and Lourdes Gurriel Jr. struck out.

Pearson made short work of the Nationals in the top of the second: two groundouts and a strikeout on 14 pitches.

Scherzer responded with an equally efficient inning on 13 pitches: All he allowed was a slow infield single by the designated hitter,3 Rowdy Tellez.

Pearson allowed a two-out single to Turner in the top of the third and walked Eaton again, but got Cabrera to ground out to leave them on base.

The Jays managed two baserunners in the bottom of the third. Derek Fisher missed a home run by inches. The ball hit off the top of the padding on the visitors bullpen fence and stayed in play, giving him a one-out double. After Biggio’s two-out walk, Gurriel grounded out to short.

The Nationals also threatened in the fourth. Thames doubled into the right-field corner and moved to third on Kurt Suzuki’s groundout. But Starlin Castro’s solid line drive went right into second baseman Biggio’s glove and Carter Kieboom looked at strike three — 99 MPH on the corner.

Scherzer seemed to be hitting his stride in the bottom of the fourth: He collected two more strikeouts and a fly out.

Pearson finished strong in the fifth. He struck out Andrew Stevenson and Victor Robles and got Turner to fly out.

Scherzer kept rolling in the bottom of the fifth: two more strikeouts and a groundout.

Pearson would not return for the sixth inning, so that completed his debut. He’d have a good story to tell his descendants: In his debut, he faced probable Hall of Famer Max Scherzer, and matched him. As Pearson departed, each pitcher had thrown 75 pitches and allowed two hits, two walks, and no runs. (Scherzer was ahead on strikeouts, though, eight to five.)4

Jays reliever Rafael Dolis needed only 11 pitches to dispose of the Nationals in the top of the sixth.

Scherzer struck out Hernández to start the bottom of the sixth. Although he could stalk off the mound after a strikeout, the players could not throw the ball around the infield. Once a player other than the pitcher or catcher had touched the ball, it had to be taken out of play.5 Biggio and Gurriel grounded out, giving Scherzer another clean inning.

Sam Gaviglio took over the pitching in the top of the seventh. He issued a one-out walk to Castro. Kieboom swung at the first pitch, singling into center. Stevenson lined to left: Gurriel saved a double (and probably a run) with a diving, rolling catch. That prompted a pitching change to Jordan Romano, who struck out Robles.

Continuing with the “home away from home” theme, the Nationals Park video board played the “Okay, Blue Jays” video in the seventh inning stretch.

Scherzer pitched his third consecutive clean inning in the bottom of the seventh, inducing three groundouts.

Romano continued pitching in the top of the eighth, getting Turner on a comebacker followed by two strikeouts.

Between the top and bottom of the eighth, the cameras caught Scherzer chatting with Nationals manager Davey Martinez. Scherzer told Martinez that since he had a week’s rest coming up,6 he was good to go for another inning. Joe Panik started the Toronto eighth with a single into center. Pinch-runner Anthony Alford stole second, putting the potential go-ahead run in scoring position.

Scherzer got his 10th strikeout of the game in the Toronto eighth when Santiago Espinal popped a bunt over the netting into the stands. He then tried to pick off Alford but threw the ball at second-base umpire Hunter Wendelstedt. Turner, covering on the pickoff play, lunged for the ball, falling over Wendelstedt in the process. By the time Turner and Wendelstedt got untangled, Alford was safely on third.

Scherzer walked Fisher, and Martinez called on Daniel Hudson. Hernández hit a ball on the ground toward short. Turner laid out for the catch, flipping the ball barehand to Castro at second who made a timely throw to first for the third out, preserving the pristine 0-0 score.

The Jays’ fourth relief pitcher, Anthony Bass, got three groundouts in the ninth for his inning of work.

The Jays came to the plate in the bottom of the ninth looking for a walk-off. No one even made it to first base against Hudson’s pitching; Biggio, Gurriel, and Guerrero all struck out.

For only the second time in their history, the Nationals entered extra innings with a 0-0 score.7 This was their first extra-inning game of 2020.

Extra-inning games in 2020 included an added feature:8 A runner was placed on second base to begin each half-inning.9 The runner would be the player who had made the last out of the previous inning. So the top of the 10th would have begun with Castro on second, but he was replaced by pinch-runner Emilio Bonifácio.

Shun Yamaguchi walked Kieboom and Stevenson to load the bases. He almost got out of trouble; he struck out Robles and Turner. Eaton’s hit bounced off Yamaguchi toward second. There was a close play at second: Stevenson was called safe, but it wasn’t entirely clear whether Biggio’s hand or Stevenson’s foot arrived first. They got tangled up but when the dust cleared Stevenson was flat on his face — with his toes still touching the bag. The play was reviewed, but there was no definitive angle to overturn the call so the first run of the game scored.

That brought up Cabrera, who was 0-for-12 in the series. He redeemed himself with a triple just inside the first-base line, clearing the bases and putting the Nats up 4-0. Thames flied out.

Since the Nationals’ closer Hudson had pitched the ninth, Tanner Rainey took the mound in the 10th with Guerrero on second. Tellez was called out looking at strike three, argued, and got himself ejected. Apparently, someone in the dugout was still chirping about the call. (With no fans in the stands it was easy for the umpires to hear everything from the dugouts.) With all the masks on the nonplayers,10 the guilty party wasn’t obvious. Joe West, the umpire crew chief, wearing his mask down at his chin, came to have a word or two with Jays manager Charlie Montoyo. Toronto coach Dante Bichette ending up being the “guilty” party and taking the ejection.

Back on the field, Jansen struck out. Brandon Drury11 also struck out, but that didn’t end the game. The pitch got away, and by the time Suzuki corralled the ball, he had to hurry the throw. First-base umpire West held that the throw pulled Thames off the bag. The Nationals challenged, but lost. But the Jays could not take advantage of the two-out opportunity: Espinal flied out to end the game, giving the Nationals their second victory of the shortened season.

The Blue Jays finally got to play a true home game at Sahlen Field on August 11, against the Miami Marlins. They won that game, 5-4.

In addition to Retrosheet and Baseball-Reference, the author viewed the TV broadcasts of the game at MLB.com.

2 In keeping with the Toronto-home-game theme, only the Jays players heard their walk-up music and the electronic crowd noise increased when the Jays were batting or made a great play in the field.

3 Although Nationals Park was a National League Park, both leagues used the DH through the 2020 season. Among other reasons, the shortened second “spring training” in midsummer before the start of the season didn’t allow pitchers time to spend on batting practice.

4 The rest of his season did not go as well: He finished with a 6.00 ERA over 18 innings pitched.

6 The Nationals were scheduled to be off July 31 through August 3.

8 “Feature” is a neutral word: Many other words were used by fans, especially traditionalist ones, to describe it. The idea was that extra-inning games would be finished more quickly, thus limiting risk of COVID exposure among players, umpires, coaches, and ballpark workers. This was not the first game of the season where this had occurred: that was A’s-Angels on July 24. The Jays had their first extra-inning game on July 26.

9 If that runner scored, the run was not charged as an earned run to the pitcher on the mound, although the pitcher could be charged with a loss. Yamaguchi was charged with the loss in this game, which does not seem inequitable given that he allowed three additional runners to score. He threw 34 pitches; only 18 were strikes. During the 2020 season, there were games in which this result might have been less equitable.

10 Masks were supposed to be worn by nonplayers (i.e., coaches, bench players, umpires). A few players chose to wear them even while playing (i.e., Gurriel in this game).

11 Third baseman Drury was substituted for pinch-runner Alford at the top of the ninth.