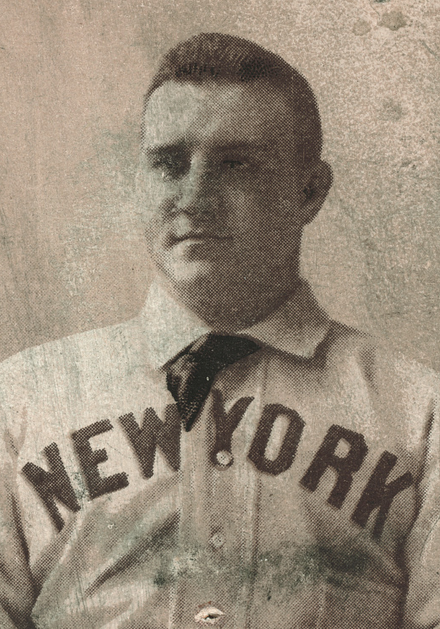 “It was the cleverest piece of pitching ever seen in the Polo Grounds,” opined the New York Times about the Giants’ 20-year-old Amos Rusie’s no-hitter against the Brooklyn Bridegrooms in July 1891.1 “At times [Brooklyn] shrank away from his balls which curved over the plate,” wrote the Brooklyn Daily Eagle of the right-hander’s command performance and the first no-hitter in the history of the Giants club. “[T]he speed of the delivery was swift and wild at times and marked by curves which puzzled the batsman.”2 As of the end of the 2015 season, Rusie was the youngest big-leaguer to author a no-hitter (20 years, 2 months).

Friday, July 31, was a “perfect day” for baseball, according to the New York Tribune, which estimated that 2,580 spectators filed into the Polo Grounds, which had just opened in April 1890, to see a clash between Gotham City rivals the Giants and Bridegrooms.3 Brooklyn, the reigning NL pennant-winner, had struggled this far in ’91 under first-year player-manager John Montgomery Ward, and were in sixth place (36-42) in the eight-team league. Coincidentally, Ward, a former hurler who had transitioned to shortstop and second base, had himself been the youngest pitcher (20 years, 3 months) to spin a big-league no-hitter when the future Hall of Famer held the Buffalo Bisons hitless as a member of the NL Providence Grays on June 17, 1880. After a disappointing sixth-place finish the previous season, veteran skipper Jim Mutrie’s New York club was in second place (47-32), just 3½ games behind the Chicago Colts.

The Giants’ hopes to capture their third pennant in the last four seasons seemed dashed on July 24 when Rusie hurt the index finger of his right hand attempting to field a grounder in the second inning of an eventual victory over Philadelphia.4 The New York Times reported that the club feared “he would not be able to play for some time to come.”5 The loss of Rusie, often considered the hardest thrower in the game, would indeed have been a disaster. “[Rusie’s] pitching alone has saved the club,” suggested the Times. “[I]f he has to retire for any length of time the team will do a little tobogganing.”6 The Indiana-born hurler, known as the Hoosier Thunderbolt, had debuted as a 17-year-old in 1889, and made headlines the following season by posting a 29-34 record, completing 56 of 62 starts while striking out 341 and walking 289, both league bests. The competitive Rusie was not the type to rest, and, according to the Times, “he urged Capt. Ewing to allow him to play” against the Bridegrooms.7 Long John Ewing, the team’s captain and secondary starter, was happy to oblige. About five weeks earlier, on June 22, Ewing was on the mound when Brooklyn’s Tom Lovett held the Giants hitless at Eastern Park in Brooklyn.8

Since its inception in 1876, the National League had showcased pitchers who racked up strikeouts, like Old Hoss Radbourn, John Clarkson, Jim Whitney, and Tim Keefe, but hitters had never seen anything like the speed and wildness of Rusie’s pitches. In fact, Rusie’s pitching was considered among the reasons why major-league baseball decided to replace the pitcher’s 5½-by-4-foot box with a 12-by-4-inch pitching rubber in 1893, thereby increasing the distance of the plate from about 55 feet to 60 feet 6 inches.9 Pitchers threw from a flat surface in Rusie’s era. The pitcher’s mound was introduced around 1903; Monte Ward is often given credit for the idea.

Under the rules of time, the home team had the option of batting or taking the field to start the game. The Giants defied common convention by sending Brooklyn to the plate first (a fact noted by the local newspapers).10 Rusie set the tone of the game by striking out leadoff batter Ward. “Brooklyn’s batsmen were at Rusie’s mercy during the rest of the game,” opined the Tribune.

New York wasted no time pressuring slumping Brooklyn hurler Adonis Terry, who had entered the season with a 120-123 record in seven seasons. Leadoff hitter George Gore drew a walk, but was forced at second on Silent Mike Tiernan’s grounder. After Charley Bassett walked, 40-year-old Orator Jim O’Rourke bunted to load the bases. Roger Connor’s “puny effort,” according to the Tribune, led to a double play, but still Tiernan scored the game’s first run.11 The Times described it as a sacrifice bunt by Connor; with Bassett subsequently getting “caught off third.”12

The Giants maintained a precarious 1-0 lead until the bottom of the sixth, when they “began to find Terry’s curves.”13 O’Rourke led off with another bunt and then scored when Connor smashed one of “his favorite extra hits,” a triple in the left-center field gap.14 The career leader in triples with 157 entering the ’91 season, Connor had led the NL in three-baggers twice and finished second four times in the previous nine campaigns. Dick Buckley connected for a two-out double to plate Connor for a 3-0 Giants lead.

Described by the Brooklyn Daily Eagle as “fearfully intimidating,” the stout, 6-foot-1, 200-pound Rusie continued to mow down Brooklyn’s hitters.15 In the bottom of the seventh, Rusie’s teammates doubled his lead, effectively sealing the Bridegrooms’ fate and leaving them at the altar. Gore, who began the season as the NL career leader in walks (576), took a free pass, moved to third on consecutive sacrifice bunts by Tiernan and Bassett, and then scored on O’Rourke’s hit described variously as a liner to left field by the Times and Tribune, or a sacrifice bunt by the Brooklyn Daily Eagle. O’Rourke stole second, “aided by a passed ball” by catcher Con Daily.16 After Connor drew a walk, the Giants attempted a double steal. Daily’s bad throw sailed into left field, enabling O’Rourke to score. Seemingly indifferent to the errant orb rolling in his direction, left fielder Darby O’Brien was, according to the Times, “slow in retrieving the ball”; this allowed Connor to scamper home for the Giants’ sixth and final run.17

Rusie, lauded as a “gallant young pitcher” by the Tribune, held Brooklyn hitless in the ninth to fashion the maiden no-hitter in Giants history in one hour and 45 minutes. The Times gushed about the most popular player on the team, if not metropolitan New York, in its account of the game. “[Rusie] sent balls to the plate with rare speed, and he curved the sphere in a manner to behold,” winning with “apparent ease.”18 Though Rusie fanned only four and issued seven bases on balls, he overpowered Brooklyn’s hitters, who pounded his curveball into the dirt throughout the game. The Bridegrooms hit only one ball out of the infield; O’Brien popped up to shallow center where Gore easily snared the ball. [Neither the Times, Tribune, nor Eagle reported in which inning that putout occurred]. There was “no question of a base hit being made,” pronounced the Times.19

Local newspapers gave credit to the Giants’ exceptional fielding for the no-hitter as much as they did Rusie’s hurling. The Tribune described the game as a “scientific contest” with New York’s “unusually brilliant” fielding.20 In an era when teams averaged more than three fielding errors per game (excluding passed balls by catchers), New York committed just one, by second baseman Danny Richardson. [New York finished the ’91 season with 384 errors and a .933 fielding percentage; both marks were second best to the Boston Beaneaters’ 358 and .938.] The Brooklyn Daily Eagle gushed that “never before have [the Giants] given such a fine exhibition of fielding”; the Times claimed that the Giants “fielded the ball with unaccustomed skill.”21 New York retired 16 of 27 batters on what the Times considered “grounders of a very weak character.”22 Though baseball gloves and mitts had become commonplace about a decade earlier, padding had been used only since the late mid- to late 1880s; fielding was still a dangerous and awe-inspiring art at a time when the game was defined by bunting and infield hits. The Tribune, for example, singled out New York’s second baseman Charley Bassett whose “throwing across the infield [was] especially fine.”23

Rusie’s no-hitter cemented his reputation as one of baseball’s best hurlers and a genuine celebrity. The future Hall of Famer finished the season with 33 victories, tied with the Beaneaters’ John Clarkson for second most behind Chicago’s Bill Hutchinson’s 44. It was also the first of four consecutive seasons in which Rusie notched at least 30 wins, including a league-best and career-high 36 in 1894. Over a dominating six-year stretch from 1890 to 1895, the Hoosier Thunderbolt paced the circuit in strikeouts and walks five times each and shutouts four times for Giants teams that finished in the top half of the standing only twice.

9 For more on the history of the pitcher’s mound, see Eric Miklich, The Pitcher’s Area, 19th Century Baseball. 19cbaseball.com/field-8.html. See Tim Wendel’s essay on Amos Rusie at the National Pastime for more on Rusie’s role in the changes of 1893, thenationalpastimemuseum.com/article/amos-rusie.