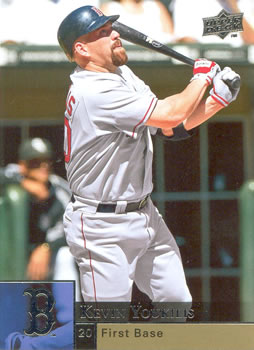 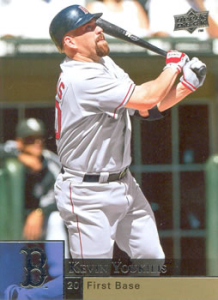 On the last day of July 2009, the Baltimore Orioles were at home hosting the Boston Red Sox. The Orioles no longer appeared to be a contender in the campaign for the American League East title; they were 17½ games behind the division-leading New York Yankees. The Red Sox, however, were in second place, just 2½ games behind the Yankees.

Dave Trembley, in his third year as Orioles manager, named right-hander Jeremy Guthrie (7-9) to start. The first pitch was at 7:06 P.M. On a 3-and-1 count, leadoff batter Jacoby Ellsbury singled to right field. He stole second base, but Guthrie retired the side without any difficulty.

The Red Sox also started a right-hander, John Smoltz; his record was 1-4. Manager Terry Francona was in his sixth season as Red Sox skipper, with World Series championships in 2004 and 2007. Smoltz faced three batters, hitting one of them, but was taken off the hook by a double play.

Boston scored first, taking a 1-0 lead in the top of the second inning. The Red Sox loaded the bases with nobody out, but got only one run, on Nick Green’s sacrifice fly. Smoltz gave up back-to-back singles, but a double play and a strikeout kept the Orioles off the board.

In the top of the third, Kevin Youkilis hit a one-out single. David Ortiz then homered to deep right-center, giving the Red Sox a 3-0 lead.1 It was Ortiz’s 15th home run of the season.

The Orioles tied the game in the bottom of the third. Matt Wieters singled, advanced to second, and scored on a Brian Roberts single. A throwing error allowed Roberts to take second. Nolan Reimold then homered to right field to make it 3-3.

Neither team scored in the fourth.

Ellsbury led off the fifth with a homer to deep right field. Two singles followed but no one scored. It was 4-3, Red Sox.

In the bottom of the sixth, another home run tipped the balance the other way. With one out, Nick Markakis singled and Aubrey Huff followed with a home run to deep center field. Luke Scott also hit a ball to deep center field, but Ellsbury, crashing into the wall, made a spectacular catch for the third out, robbing Scott of a home run. It was, wrote the Boston Globe’s Adam Kilgore, Ellsbury’s “most awesome catch in a career of awesome catches.”2 After the game, Smoltz said, “I told him it was the best catch I’ve seen in a very long time. We can look back and say, ‘That was the game-winner.’”3 It was 5-4, Orioles, after six innings.

There were 44,091 paying fans in the ballpark. Though there had already been four home runs in the game, the weather was not really a factor. The temperature was 75 degrees, but the wind was only 2 miles per hour to center field.

In the top of the seventh, with two outs and Ellsbury on first base, Trembley thought about bringing in a reliever but decided to stick with Guthrie, who had just struck out Dustin Pedroia for the second out. Kevin Youkilis homered to deep left-center to make it 6-5, in Boston’s favor. It was the fifth home run of the game and the fourth in a row that resulted in one team or the other losing the lead.

After Youklis’s home run, Matt Albers came on in relief of Guthrie. He gave up a single to David Ortiz, but Ortiz was tagged out trying to stretch his single into a double. After the game Trembley said, “We busted our butts to win the game tonight and I left Guthrie in the game one hitter too long. I’ll take that. I really believed he was going to get (Youkilis) out.”4

In the bottom of the seventh, Ramon Ramirez relieved Smoltz, hoping to hold the one-run lead. A single and an error placed Orioles on first base and second with just one out. Two groundouts followed, the first resulting a force out at third base and the second in a force out at second base.

Jason Bay singled off Albers to open the eighth, but a double play and a fly ball to center forestalled any threat.

In the bottom of the eighth, Francona called on Hideki Okajima to take over from Ramirez. He struck out Markakis but walked Huff and Ty Wigginton. Luke Scott then popped up foul to first base and Wieters lined out, hitting the ball straight to Okajima. In both the seventh and eighth, the O’s had runners on first and second but couldn’t push across a run to again tie the game.

It was still a one-run game heading into the ninth inning. The Orioles called on Cla Meredith to keep it that way, and he did, retiring the Red Sox in order, 1-2-3. The Red Sox called on closer Jonathan Papelbon, with 26 saves to his credit. Papelbon also set down the side in order, with two swinging strikeouts bracketing a fly out to center field.

All in all, it was a well-balanced game, Baltimore posting nine hits to Boston’s 11. Both teams had five strikeouts and two bases on balls. Baltimore pitchers threw 135 balls to 37 Boston batters; Boston pitchers threw 138 balls to 38 Baltimore batters. But the score stood as Red Sox 6, Orioles 5. All the runs in the game were earned runs, and all were charged to the respective starting pitchers.

Guthrie beat himself up after the game. “We get a big home run from Aubrey to put us back ahead, and I got out there and had a lot of confidence I could get through that seventh inning. You can never complain as a player for letting your manager let you go out there and compete and show that confidence. Unfortunately, I couldn’t reward him and, more importantly, the team with that one big out.”5

Trembley shouldered the responsibility: “He’s supposed to be your best guy. He’s your number-one guy. He wants the opportunity. You feel confident he’s going to get the guy out. He deserves the opportunity to be there. It’s that simple. If he gets the guy out, it’s a different story. He doesn’t. He said he wanted the pitch back, but I’m the guy who left him out there, so I’m the guy responsible for it.”6

With two errors and Ortiz being thrown out at second base, Red Sox manager Francona said after the game, “The game took a few turns. We came out and got ahead. They came back and took the lead and we came right back. … We made mistakes but didn’t let them beat us.”7 Francona added, “They just keep grinding. It’s not always perfect but they keep grinding.”8

The Yankees lost to the White Sox, 10-5, and the Red Sox thus moved up to 1½ games behind New York. By season’s end, however, the Yankees had extended their lead and finished a very comfortable eight games ahead of the second-place Red Sox. The Orioles were 39 games behind New York. The Yankees swept the Twins in the Division Series, beat the Angels in the ALCS (the Angels swept the wild-card Red Sox) four games to two, and then beat the Phillies in the 2009 World Series, again four games to two.

In addition to the sources listed in the Notes, the author also consulted Retrosheet.org and Baseball-Reference.com. Thanks to Charlie Bevis and Lyle Spatz for supplying Baltimore newspaper articles.

1 Ortiz had homered the day before, leading the Red Sox to an 8-5 win over Oakland. It was the same day that Ortiz’s name had been included in a New York Times list of over 100 major leaguers who were linked to a positive test from 2003 for performance-enhancing drugs.