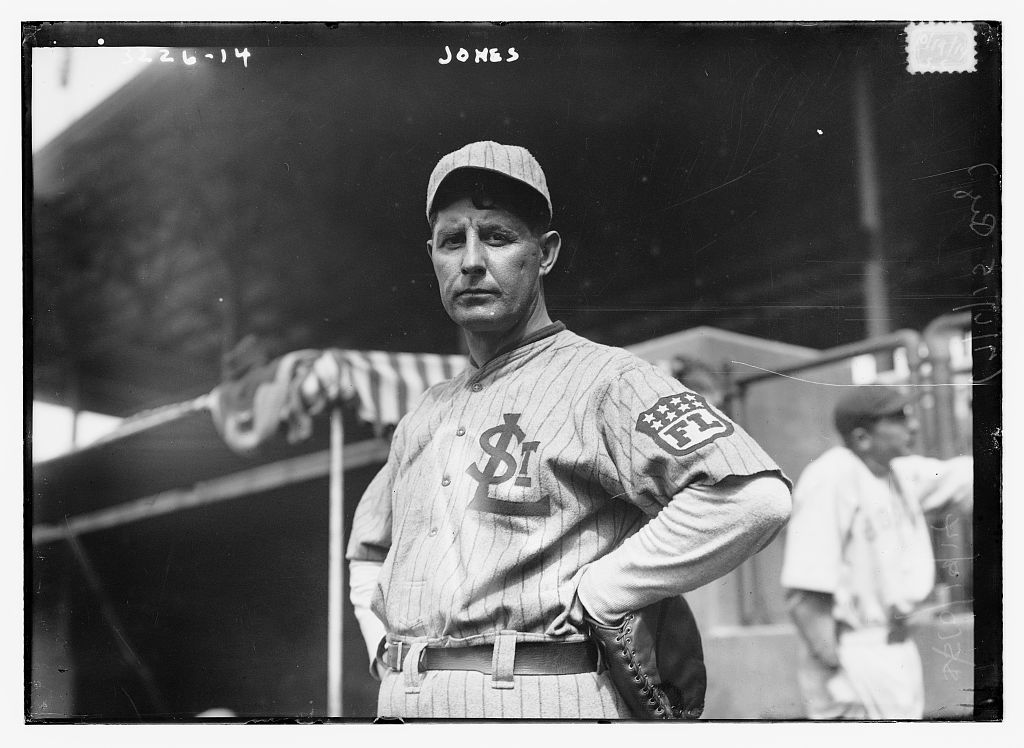 St. Louis Terriers manager Fielder Jones was known for his disagreements with umpires.

“As the (player) manager of the (Chicago) White Sox, (Jones) had regularly battled umpires,” his SABR biographer wrote. “Writers commented about Jones racing in from center field so often that a path was worn in the grass. Few managers or umpires knew the rulebook as well as Jones. As a true student of the game, he would use any rule to his advantage. He was more than willing to complain about on-field decisions.”1

At one time the American and National Leagues changed a rule because of a tactic used by Jones while he managed the White Sox from 1904 to 1908.

“Jones, to give a relief pitcher plenty of time to warmup had on a number of occasions sent two, three, and even four men to the box one right after the other with instructions to delay the game by taking extra time to pitch warm-up ball to the catcher. All of them would be instructed not to pitch to the bats-man, but to just fool around and waste time until the pitcher ‘Jonesy’ intended to use was warmed up sufficiently to take his place in the box. It caused so much delay that finally to do away with the evil a rule was made that when a pitcher was announced he had to pitch at least one ball to a batsman before he could be removed from the game.”2

The commotion that occurred after a close call went against Jones’s team in the second game of a doubleheader in Kansas City probably didn’t come as much of a surprise. But the aftermath — which included two ejections and suspensions, a resignation, and eventually an umpire being fired — made a lasting impression.

The St. Louis Terriers and the Kansas City Packers played a makeup game in St. Louis on July 3 before shifting to Kansas City for a four-game series beginning on Sunday, July 4. The teams went into the “holiday” July 5 doubleheader in a battle for first place. The Packers (42-28) had a one-game edge over the second-place Terriers (39-27).

The Terriers won the first game of the doubleheader, 1-0, as Bob Groom outdueled the Packers’ Alex Main. The Terriers scored a run in the top of the ninth to support Groom’s three-hitter.

The trouble in the second game started early. With one out in the bottom of the first, Packers shortstop Johnny Rawlings singled and then attempted to steal second base. Rawlings was called safe by umpire Bill Finneran. Terriers shortstop Ernie Johnson was ejected by umpire Harry Howell after voicing his displeasure with the call. Jones rushed onto the field to take up the argument and he was also ejected by Howell.3

The situation got more tense. As Johnson left the field, “he struck a spectator on the side line and it looked for a time as if the St. Louis team would be mobbed. The home team and four policemen escorted Johnson to the club house to protect him from the crowd.”4

Before Jones left the field, “Finneran is said to have told Jones he would ‘suspend him.’ Jones’ answer was that there would be no suspension because he was done with Finneran and the league as well.”5

After order on the field was restored, the Packers scored two runs — one unearned — in the bottom of the third inning to take a 2-0 lead and chase Terriers starter Eddie Plank. But the Terriers rallied for four runs in the fifth inning to take a 4-1 lead. The Terriers loaded the bases with nobody out when Grover Hartley was hit by a pitch, Charlie Deal singled, and Al Bridwell, who had replaced Johnson in the batting order, beat out a bunt. Doc Crandall, who had replaced Plank on the mound in the fourth inning, and Bobby Vaughn each delivered two-run singles.

The Packers got a run back in the bottom of the fifth inning off Crandall, but Crandall shut out the Packers the rest of the way for a 4-3 Terriers victory. Crandall allowed just three hits and one run in six innings.

After being ejected Jones had returned to the clubhouse, wrote his resignation and telegraphed it to St. Louis team President Philip Ball. After the game, Jones was tight-lipped with reporters.

“‘I have nothing to say’ was only comment Jones would make when asked about his action,” the Chicago Tribune reported. “‘My resignation was wired to Mr. Ball this afternoon, and any comment concerning the case must come from him.’”6

When asked if the umpires had anything to do with the resignation, “Jones replied, ‘Yes,’ and (he) then went back to the curt ‘I have nothing to say’ to answer all further queries,” the Tribune added.7

An unnamed Terrier was vocal in support of Jones, telling a reporter, “The umpires are the cause of it all. We have had Finneran and Howell in our last three series, and they have decided several close plays against us — yes, and some that were not even close. Fielder has fought them gamely and fairly. He knows baseball thoroughly, and on every decision to which he has objected he has known he was right and that the umpires were obviously wrong. He simply tired of arguing for the right in vain.”8

The player continued, “In the opinion of the players, Jones will reconsider his resignation and take the reins again. We feel his loss deeply and have urged him to take back his resignation. He is the finest man to work for in the world and every player on the club has the highest respect for him.”9

After the lobbying from his players and team officials, Jones agreed to stay with the team until it returned to St. Louis. He said he would consider remaining manager if “President Ball would back him up and if President (James A.) Gilmore of the (Federal) league would give him ‘game satisfaction’ regarding umpiring.”10

After the Packers won the series finale on July 6, the Terriers headed to Pittsburgh for four games starting on July 8. On July 7, a travel day for the club, Ball announced that Jones had reconsidered his resignation.

When the series opened in Pittsburgh, the suspensions had been lifted — Johnson was back in the lineup and Jones back in charge — and Finneran and Howell were the assigned umpires. For the final game of the series, on July 11, Gilmore was in attendance and Howell was suddenly replaced by Lu Fyfe. Finneran and Howell had umpired 13 consecutive games involving the Terriers.

“(Gilmore) was surprised to learn that Finneran and Howell had officiated in five successive St. Louis series, but disavowed an intention of imposing this umpire on Fielder Jones,” the St. Louis Post-Dispatch wrote. “He said he broke up the Finneran combination ‘for the good of the game.’”11

On July 26, Howell and Fyfe were both fired by the league. But on August 1, Howell, who spent 13 seasons in the major leagues as a pitcher who threw a spitter and had spent the previous three seasons as an umpire in the Texas League, umpired a Federal League game in Chicago. That was the final game of his 85-game stint as a Federal League umpire.

“Howell is doing well until Gilmore assigns him to follow the St. Louis club with Finneran, one of the most unpopular officials of the league, as a partner,” a newspaper commented. “Howell and Finneran get in bad with Manager Jones, of St. Louis. Jones ‘kicks’ to Gilmore. Gilmore keeps Howell and Finneran following Jones. Tension grows tenser all the time. Trouble at Buffalo. More trouble at St. Louis. Another row at Kansas City and Jones resigns as manager of the St. Louis team unless Gilmore sees that umpires are efficient. Big session between owner Ball, of the St. Louis team and Gilmore. Jones remains as manager. Howell is dropped from the Federal League as umpire.”12

The brouhaha in Kansas City wasn’t the last of the season for Jones. On September 15, in the fifth inning of the Terriers’ 3-2 victory over the Brooklyn Tip-Tops in St. Louis, he got into an argument with umpire John Mullin. He left the field before being ejected but the next day was suspended by Gilmore for three games and fined $50.

In addition to the sources cited in the Notes, the author also consulted Baseball-Reference.com, Newspapers.com, Retrosheet.org, and sabr.org.

3 There are some differences among contemporary newspaper accounts as to whether this incident occurred in the first or second inning. but it appears the first inning is more likely.