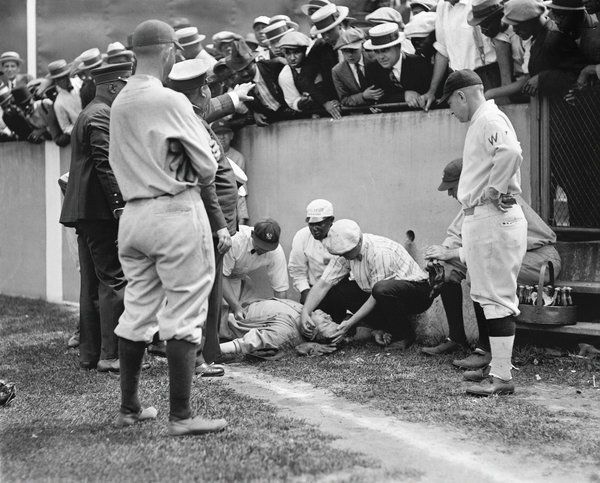 Babe Ruth feared the worst when he played right field in Washington’s Griffith Stadium. The unsightly concrete barrier that separated the playing field from the seats and spectators seemed especially menacing and dangerous. “Babe says he’s been afraid that he was going to bump into that wall in the Washington Park ever since he began playing right field.” 1His fear became reality in early July of 1924, when his New York Yankees played the Senators in Game 1 of a doubleheader at the D.C. ballpark.

Lying on the grass, in front of the concrete wall with concerned onlookers draped over it, was one of the best-known baseball players – if not individuals – in the country. Ruth lay motionless as a medical trainer, having just poured icy water on his face, tried to revive him, to no avail.

Ruth’s teammates and opponents gathered around. Others, too, joined the scene. One was a photographer who snapped a now-famous black and white photograph that captures the dramatic spectacle.

We see, through the photograph, Ruth lying on the ground unconscious, his body straddling the chalky right-field foul line. The charismatic and gregarious Bambino, the world’s greatest ballplayer, had moments earlier sprinted full steam ahead and slammed his body into that concrete wall and knocked himself out cold.

Ruth, normally the irresistible force and the immovable object, had met his match and his fear had become reality. The Sultan of Swat had been swatted.

The Bambino’s Yankees were in the nation’s capital on Saturday, July 5, 1924, for a second day of doubleheaders with the Senators. They had swept a twin bill on Friday, Independence Day, 4-2 and 2-0, to move to within two games of the American League-leading Washington club. Two wins on Saturday would tie the two teams for first place.

The great Walter Johnson was on the mound for the Senators. He had won 10 games already this season, but the Yankees came out swinging and got to the 18-year veteran early in the contest. Leadoff hitter Whitey Witt “bounded a high single” 2 over the reach of the 6-foot-1 Johnson’s head, and Ruth smacked a double to right-center that moved Witt to third. The next batter, Bob Meusel, delivered a long sacrifice fly to the Senators’ Sam Rice in right field that scored Witt to give the Yankees a 1-0 advantage.

Herb Pennock took his 8-6 record to the mound for the Yankees and kept the bats of the league-leading Senators quiet. Washington’s Wid Matthews recorded the first of his two hits in the first inning, but player-manager Bucky Harris erased Mathews from the basepaths by hitting into a double play. The New York Times speculated that Harris’s failure at bat might have been caused by embarrassment after he was presented with a large bouquet of red roses at the plate just before he was to hit. 3

In the fourth, Matthews reached first on an infield hit after slapping a pitch that ricocheted off Pennock’s glove. The center fielder reached second on a sacrifice by Harris and advanced to third as left fielder Goose Goslin grounded out.

With two outs and Matthews standing on third, left-handed-batting Joe Judge walked to the plate. Pennock had retired Judge once already in the game, but this time the first baseman struck a pitch that came within a few feet of being a home run and would have given the Senators the lead.

Judge smoked Pennock’s pitch and sent it cruising down the right-field line. Ruth, patrolling right field, sprinted to his left and homed in on the flying spheroid, hoping to record an out and send the Senators back to the dugout without a run.

As the ball dropped foul into the crowd, “The Babe ran into the pavilion parapet with the full force of his body, and dropped unconscious to the grass,” the New York Times reported.

Yankees trainer Doc Woods, carrying a “little black bag” and a bucket of cold water, ran to assist Ruth. Uniformed police officers also hurried to the Babe’s aid and held back some members of curious and anxious crowd. Several photographers were there to document the scene. 4

Ruth was unconscious for five minutes, according to the Washington Post. 5 When he came to, Ruth insisted that he stay in the game despite New York manager Miller Huggins’ contrary suggestion.

The Babe, who had spent an hour that morning swatting autographed baseballs to citizen soldiers at Camp Meade, Maryland, 6 batted in the top of the sixth and hit a Johnson pitch off the center-field wall for a double. He moved to third when the next hitter, Meusel, grounded out. Ruth scored a batter later when Wally Pipp slapped a single to center.

The 25,000 “highly excited Washington fans” 7 – a 16-year-old Buck Leonard, future star of the Homestead Grays, may have been among those 8 – cheered Ruth, who galloped around the bases with a noticeable limp from his too-close encounter with the wall an inning and a half earlier. The crowd was “the largest gathering of fans to take in a local game,” Washington Post wrote. 9

The Bambino batted once more in the game, accepting a free pass to first from Johnson. Ruth finished the game with three hits in as many at-bats. His teammate Witt also had three hits, and collectively the Yankees punched 10 base knocks off Johnson for a 2-0 win.

The victory meant New York had climbed to within a single game of the Senators, and it gave the Yankees a chance to even the race in the second game.

Ruth, however, still shaken from the collision, was no help at the plate in the nightcap. He finished 0-for-3, and “swung with evident pain.” 10 He did lay down a successful bunt in the first that helped the Yankees score twice for a quick lead. The Senators, however, rallied for four in the bottom of the frame, and got two more in the fourth and one in the eighth for an easy 7-2 triumph.

After the final out of the second game that Saturday, Ruth was diagnosed with a bruised pelvic bone. It hampered him for days, but it did not hinder his performance.

The next day, the Bambino went 3-for-4 and hit his 22nd home run of the season in a 7-4 win as the Yankees concluded the series in Washington. The Yankees had an offday Monday and traveled back to New York, giving Ruth a much-needed rest. The defending World Series champions hosted the Chicago White Sox for a Tuesday doubleheader in the Bronx. Ruth was a combined 3-for-5 in the games, in which the two teams split wins.

His hip was examined once more.

“Two x-rays were made of the side after Tuesday’s game, but they failed to show any broken or fractured bones,” wrote the Times.

Ruth’s play at the plate didn’t suffer, but he did. Huggins gave the Bambino the day off from starting on Wednesday, and the New York Times reported “Ruth, who is too badly crippled to play, is worried over the condition of his side.” 11

On Wednesday against the White Sox, Huggins sent Ruth to the plate “limping and glowering,” 12 and he belted a pinch-hit single that scored two runs. The timely hit, however, “failed to cheer him up,” the New York Times reported of Ruth, who immediately yielded to a pinch runner.

8 Brad Snyder, Beyond the Shadow of the Senators: The Untold Story of the Homestead Grays and the Integration of Baseball (New York: McGraw-Hill, 2004), 15.