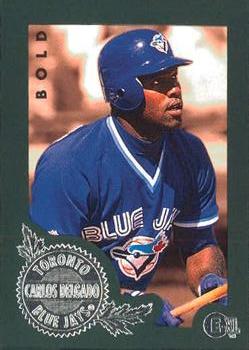 The Toronto Blue Jays were struggling as they took the field in the third game of a four-game series at Tiger Stadium. They’d lost seven of their last nine games, including the first two games against the Tigers. Detroit seemed like a good team to get their bats going against, since the Tigers pitching staff came into the Saturday afternoon game with an astronomical 6.69 ERA for the season.

However, Toronto had struggled against Detroit pitching thus far in the series, stranding 24 baserunners through the first two games. With just two games remaining until the All-Star break, the Blue Jays were anxious to turn things around.

The Blue Jays sent Pat Hentgen, a native of Fraser, Michigan, about a half-hour drive from Tiger Stadium, to the mound. Hentgen grew up cheering for the Tigers, but at this point in his career, the right-hander had struggled against his childhood heroes, especially when pitching in Detroit. Hentgen entered the game with a 1-2 record and an 8.19 ERA in seven appearances at Tiger Stadium.

Reflecting on why he struggled so much early in his career pitching in Detroit, Hentgen said: “When I got to the big leagues, the players were still the same as they were as when I was in high school. It was Alan Trammell, Lou Whitaker, Kirk Gibson. So it was weird to be on the mound at old Tiger Stadium facing those guys.”1

Hentgen also noted that he had many family and friends in the stands when he pitched, having about 50 on hand on this particular day. “Then you have all the distractions of all the people trying to call you for tickets, and all the people that are trying to contact you. That was definitely a factor for sure … that and they had a good lineup, too.”2

It seemed as though it was going to be more of the same, when Tigers leadoff man Bobby Higginson walked and Chad Curtis followed with a single to lead off the bottom of the first. But when Curtis tried to stretch his hit into a double, third baseman Ed Sprague cut off the throw from the outfield and relayed it to second to get Curtis for the inning’s first out. After striking out Travis Fryman, and walking cleanup hitter Cecil Fielder, Hentgen induced Tony Clark to ground out to second to end the inning and keep the Tigers off the scoreboard.

The Blue Jays started the scoring in the second inning, on a solo home run by Sprague and an RBI single by Charlie O’Brien. In the third, Carlos Delgado blasted a monster home run over the roof in right field. The slugging first baseman became just the 29th player to hit a ball out of the ballpark in right field since a second deck was added in 1937. Delgado said, “I hate to admit it, but I did (watch it). I stopped and said ‘Wow.’”3 The ball landed on Trumbull Avenue, just missed hitting a police car, and finally came to rest in the lumber yard of Brooks’ Ace Hardware Store. Delgado told the Toronto Star, “A policeman brought (the ball) back to the clubhouse a couple of innings later. … He said, ‘You almost hit my partner.’”4 Told that he was joining the likes of Ted Williams, Mickey Mantle, Reggie Jackson, and George Brett as one of the few players to hit one out of the ballpark, the slugger responded, “That’s pretty good company, that’s an honor for me, but I can’t walk around and say, ‘Well, I hit it out of Tiger Stadium.’ Life goes on.”5

Toronto’s home-run barrage continued in the fourth. After Delgado singled, Joe Carter belted a ball over the left-field wall to extend the Blue Jays’ lead to 5-0. It was Carter’s 20th home run, giving him 20 or more for the 11th consecutive season. Carter’s home run chased Olivares from the game. The right-hander had surrendered five earned runs in four-plus innings. Tigers manager Buddy Bell turned to reliever Greg Keagle to try to stop the bleeding.

Before the game, Blue Jays manager Cito Gaston moved a struggling Shawn Green, who was hitting just .227 with six home runs, from the seventh spot in the order up to second, in an effort to jump-start both Green and the Blue Jays lineup. Green rewarded his manager’s confidence in him with his second extra-base hit of the day, a two-run home run to right field in the sixth that put Toronto up 9-0.

In the seventh, after Otis Nixon singled and Green was hit by a pitch, Delgado hit a three-run home run to increase the Blue Jays’ lead to 12-0. In contrast to his first home run, which left the ballpark, this home run was a fly ball to the opposite field that just made it over the left-field fence into the first row of the lower grandstand. “That’s power,” Delgado joked. “The guys were teasing me about that one.”6

Joe Carter was next to bat. He doubled to deep right field to end Keagle’s night. The reliever allowed seven earned runs in 2⅔ innings. Mike Walker was the next pitcher trotted out to face the Toronto onslaught.

The Blue Jays offense kept piling on in the final two innings against Walker. In the eighth Jacob Brumfield singled home Alex Gonzalez, and in the ninth John Olerud hit Toronto’s sixth home run of the day, a two-run shot, to increase Toronto’s lead to 15-0.

Meanwhile, Pat Hentgen had settled in after a shaky start to the game. He allowed just two hits after the first inning, a single in the third and a single in the eighth that was erased on a double play. With two outs in the ninth inning, the only thing that stood between Hentgen and a complete-game shutout was his nemesis Cecil Fielder. Fielder had been a thorn in Hentgen’s side, going 12-for-30 with seven home runs leading up to this game.

Hentgen would later talk about his futile efforts to get Fielder out early in his career: “I remember having such a tough time against him, trying to do things that I didn’t normally do on the mound. I tried to drop down. I tried to throw different pitches to him that I never would have normally thought about doing.”7 But this day belonged to Hentgen. He struck out Fielder on three pitches to finish his 117-pitch, three-hit shutout. Fielder finished the game 0-for-3, with an intentional walk and two strikeouts.

The Blue Jays’ 15-run explosion was sparked by a 19-hit attack, including six home runs. Eight of the Blue Jays’ nine starters had multiple hits. Delgado was the hitting star of the day, going 3-for-5 with two home runs, a walk, four runs scored, and four runs driven in. The victory gave the Blue Jays their 1,500th win since the franchise began in 1977.

But just as impressive as the Blue Jays’ offensive outburst was Pat Hentgen’s domination on the mound.8 Hentgen told the Toronto Star: “I had a good fastball and curveball and good command of them. Any time you have that, you’ll have a decent game, but it obviously helps to have 15 runs scored, too.”9 After struggling to begin his career in his hometown, the Michigander finally had a solid start in front of his family and friends. “Oh yeah, this gets the monkey off.”10

8 Including this game, Hentgen went 13-4, with a 2.41 ERA to finish the season, and he won the American League Cy Young Award.