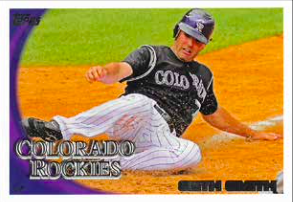 July 6, 2010, was a warm rainy evening in Mile High Denver when the first pitch by Jeff Francis was thrown to leadoff batter Felipe Lopez of the St. Louis Cardinals at 7:10 P.M.1 Home-plate umpire Bill Hohn called the first pitch a ball and the game was underway. At the start of the game, the Rockies’ record was 44 wins and 38 losses, and they were five games behind the San Diego Padres. St. Louis’s record was similar at 45 wins and 37 losses, two games behind the Cincinnati Reds. At the end of this game both teams would have the same record. For the Rockies, this game was the second of a six-game winning streak before going on the road. Neither team made the playoffs in 2010.

In the first two innings, the Cardinals were three up, three down. The Rockies also went three up and three down in the first. In the second, Colorado got three runners on against Blake Hawksworth with two singles and a walk, but two strikeouts amid the baserunners brought up pitcher Francis with the bases loaded. He grounded out to second to end the half-inning.

Saint Louis scored three runs in the third inning on a single by Aaron Miles, a home run by Lopez, another single by Colby Rasmus, and a double by Albert Pujols. Matt Holliday was walked intentionally but nothing happened with that as Nick Stavinoha batting fifth, flied out to right field. It is interesting to note that during the game, six other players would be in the fifth position of the Cardinals lineup, including the closer, Ryan Franklin.

The Rockies’ third started with a walk to Dexter Fowler followed two batters later with a home run by Carlos González. The Rockies extended the rally, but with no further scoring. Jason Giambi singled to second, Miguel Olivo hit a ball back to Hawksworth, who tried for a double play by throwing to second, but Giambi was safe and Olivo was out at first. Seth Smith walked and he and Giambi were balked to second and third, a good opportunity to overcome the Cardinals’ lead. Ian Stewart walked, bringing Clint Barmes up with the bases loaded, but like Francis in the second inning, he grounded out to second. By now the Rockies had scored twice and left six men on base. They would eventually leave 13 runners on base.

The Cardinals scored two more runs in the fourth on a walk to Yadier Molina, a single by Tyler Greene, a sacrifice by Hawksworth, a sacrifice fly by Miles for the first run, and a single by Lopez scoring Greene to complete the scoring.

The Cardinals scored again in the fifth on singles by Pujols, pinch-hitter Jon Jay, and Molina. The sixth inning brought St. Louis its last three runs on a three-run home run by Holliday after Miles had singled and Pujols walked.

In the meantime, the Rockies did not score in the fourth, fifth, or sixth innings, but left two men on base in each inning, making it a total of 12 for the game to this point.

Hawksworth lasted five innings, throwing 98 pitches. The St. Louis Post-Dispatch summed up his five innings: “Hawksworth ducked, dodged, evaded and otherwise shimmied free of trouble throughout his five innings of work – and though it took him a maximum amount of pitches, he did it with minimal damage from the Rockies.”2

In the seventh inning, Colorado scored its third run on a single by Smith, a wild pitch by Trever Miller, a single by Stewart, and a force out of Stewart at second base by pinch-hitter Chris Iannetta.

Olivo led off the bottom of the ninth and singled to center. Smith was out on a line drive to first base. One out. Melvin Mora pinch-hit for pitcher Manny Corpas.3 Mora singled to right field and Olivo ran to third. Barmes walked on four pitches; on the fourth, the ball got away from Molina for a passed ball and Olivo scored while Mora took second. The score was now 9-4, Cardinals.

Franklin came in to relieve pitcher Dennys Reyes with runners on first and second and Iannetta due up. Franklin was the Cardinals’ closer for 2010. At this point he had 16 saves and would end the year with 27 of the Cardinals’ 32. After a called ball, a swinging strike, a foul, and two more called balls, Iannetta homered to left field, scoring Mora and Barmes ahead of him. The score was now 9-7, the Cardinals having had their six-run lead more than halved and still only one out.

Fowler, the next batter hit a line-drive double to right field. By this time the wind was absolutely howling, giving any elevated ball a chance to become a souvenir.4 Pinch-hitter Brad Hawpe grounded out to shortstop, Fowler taking third. Only one more out and St. Louis would win this game. It never happened.

Next, González singled to right field. Randy Winn was playing on the warning track as González’s drive landed at his feet, scoring Fowler with the eighth run and making it a one-run game.5 Giambi followed with another single toward Winn. Winn got caught between hops, mishandled the bounce and struggled to pick up the ball. That allowed González to score from first and tie the game.6 Giambi did not advance to second on the error, which was Winn’s first in 253 games.7

The Rockies were not through. Aaron Cook ran for Giambi. Olivo came up again and singled through the infield into right field, sending Cook to third with the potential winning run. After the game Giambi said, “That’s when I knew we were winning.”8 Seth Smith came to bat. After watching two called balls go by, he fouled off a pitch. The fourth pitch was a called strike and on the next pitch Smith hit a fly-ball home run to right field to drive in three more runs for a 12-9 Colorado win. As of 2019 this was the greatest comeback win in the Rockies’ history.

Afterward, Smith said, “I know people come up in that situation and want to hit one. But I swear I wasn’t. I just didn’t want to make my second out in the inning. I was analyzing it as I ran to first and thought, ‘Why not just go out?’ “Baseball is crazy.”9

In this game with runners in scoring position, the Rockies were 3-for-13 in the first eight innings, then 3-for-4 in the ninth inning, for a game total of 6-for-17. They couldn’t get a key hit when it was needed early.

A quick glance at the scorecard could lead the reader to believe that two of the runs in the ninth were unearned. But reconstructing the inning without the error and passed ball shows that those runners would have scored regardless, so all 12 Rockies runs were earned. It also appears that Franklin was brought into the game in a nonsave situation. But the score was 9-4, with two runners on base. Adding in the next batter, the batter on deck, and the batter in “the hold,” it was barely a save situation.

After the game, Cardinals manager Tony La Russa said, “That loss wasn’t on Ryan Franklin. It was on everybody who wore the gray, including the manager.”10 Rockies manager Jim Tracy said, “It’s the best comeback I have ever been associated with. The lesson learned is that you never give away an at-bat and play until there is 27 outs.”11

In addition to the sources cited in the Notes, the author relied upon Retrosheet.org, Baseball-Reference.com, MLB.com, and his own scorecard.

3 Corpas entered the game in a double-switch after Iannetta pinch-hit and stayed in the game in the eighth inning to play third base. That was only the second time he played third base in the major leagues. In his career through 2019, Iannetta has played third base only four times, none as a starter. He had no fielding chances in this game.